Callum Morris' penalty proved decisive for the Welsh side, who recovered from a 2-1 first leg defeat to earn an unlikely 3-2 aggregate win and set up a tie with Partizan Belgrade of Serbia.

Ryan Wignall gave the part-time visitors the lead and was later sent off after Kilmarnock's Stuart Findlay had been dismissed for conceding the penalty that Morris converted.

It was a first defeat for new Kilmarnock manager Angelo Alessio and was greeted by jeers by supporters who had celebrated a third-place Scottish Premiership finish last season.

But it was a glorious night for Welsh Premier League runners-up Connah's Quay and their Scots-born manager Andy Morrison.

Nomads get it just right

The truth of this match was Kilmarnock had enough chances to win two games, but also that Nomads' game plan worked perfectly, as it almost had done last week in Wales - sit deep and defend heroically, but be prepared to strike when the time is right.

It was their trademark in last season's Scottish Challenge Cup as they reached the final, and it was expertly delivered once more.

Part of that strategy meant conceding possession and ground, and so they found themselves under early pressure.

Nomads' boss Andy Morrison seemed distraught last week when he claimed Stuart Findlay's winner in Rhyl was the first his side had conceded from a set-piece in three years. You can imagine his dismay when the same Kilmarnock player found the ball at his feet six yards from goal after a free-kick, but his tame shot was swallowed up by Lewis Brass, who would pull off a number of fine stops.

Morrison had his head in his hands for an altogether different reason a few minutes later.

Gary Dicker's sloppy pass was pounced on and Nomads countered at pace finishing with Wilde squaring the ball for Morris. Time seemed to stand still as the ball rolled towards him at the back post but, just when it seemed the net would bulge, the ball was instead sent horribly wide.

The miss should have been punished within a minute but Greg Taylor's hesitation when clean through allowed Brass to smother his shot. Nonetheless, Kilmarnock's wide men were creating chances.

Chris Burke's superb cross found a lunging Taylor at the back-post, but the Scotland full-back's desperate effort was superbly tipped away by Brass. Burke himself then lashed one into the side netting, before Stephen O'Donnell's low drive pinged back off a post.

Having weathered the Kilmarnock storm, Nomads grew into the game as the first 45 minutes drew to a close, but could not carve a clear chance.

Needing at least two goals to go through, they had to come out swinging in the second half - and they did.

Wignall's fine header nestled in the net to put the frighteners up their hosts, the silky build up belying the Nomads' reputation as a one-dimensional team. 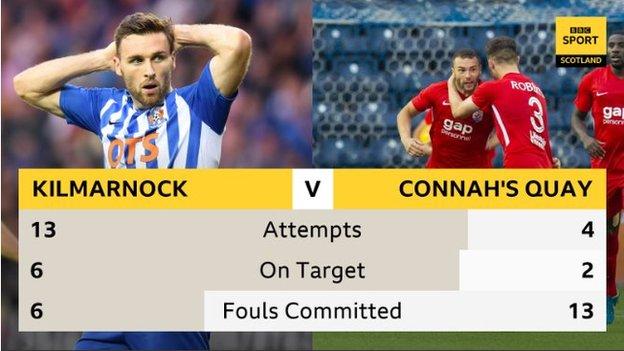 While the dynamism of their wide players was a clear positive for Kilmarnock, the fact it was they who were lining up to finish the chances as well as creating them drew attention to the lack of a natural goalscorer.

At times Eamonn Brophy's link up play was impressive, but the former Hamilton man struggled to get into killer finishing positions and there was a lack of firepower on the bench.

O'Donnell fired narrowly over after Burke's slippery run along the by-line as the home fans' frustration grew louder with every stunted attack.

Nomads could take a large share of the credit for that, as they defended their penalty box expertly and aggressively, while waiting for their chance to strike at the other end.

It came in controversial fashion, too. Substitute Jamie Insall slipped clear of Findlay to race on to a through ball and, in the Kilmarnock defender's desperation to prevent the shot, he hauled the former Hibernian and East Fife player down in the box.

There was no doubt Findlay impeded Insall but the Nomads player had appeared offside as the ball was played through. Nevertheless, the flag stayed down and, after Findlay had been dismissed, Morris confidently stepped up to dispatch the spot kick and send the small band of Nomads fans into ecstasy.

In the last throes, Kilmarnock desperately tried to produce another late salvo. Kirk Broadfoot's header crashed off the bar, and as Nomads scrapped to keep them at bay, Wignall was sent off for his second lunge of the evening.

But the hosts' composure in the final third deserted them, and Nomads held firm for a fantastic victory. Their game plan worked perfectly, and their reward is a mouth-watering clash with Partizan Belgrade.