Rangers set up a Europa League second qualifying round reunion with 2017 conquerors Progres Niederkorn by cruising past Gibraltans St Joseph's.

Morelos headed home before the break, then added a penalty and a delightful back-heel finish in the second half.

His replacement, Jermain Defoe, came off the bench to net a late double, the second finishing a lovely move.

The 10-0 aggregate victory means Steven Gerrard's men will play Progres of Luxembourg next, who dealt the Ibrox side a shock defeat in the first round of qualifiers two years ago, and beat Cork City on aggregate on Thursday.

This was a turkey shoot, an opportunity for Gerrard to put minutes into some of his fringe players and new recruits. The likes of Greg Docherty, back from a loan spell at Shrewsbury Town, and new signing Jake Hastie, a summer arrival from Motherwell, were among nine changes to the first-leg XI.

The revamped hosts seared into the lead with less than three minutes gone, the industrious Docherty deftly sliding in Aribo, and the powerful midfielder tucking home his first Rangers goal from a tight angle.

But amid the new and returning men, it was a familiar, impish and much-cherished face that stole the show.

A wonderful display of strength and finesse from Morelos, leading the line in place of Defoe, carved out a glorious chance for Hastie to open his Rangers account with four minutes of the half remaining. The Colombian nudged the ball past his marker up the left, bullied his way to the bye-line and rolled inside for Hastie. But with the goal at his mercy, the young winger screwed wide.

Rangers would strike again before the interval, though, that combination pivotal again. Stand-in captain Connor Goldson lofted Hastie's low corner towards the back post with a beautiful back-heel flick, and galloping in to nod it home was Morelos - his 50th goal in 93 outings for the club.

The prolific striker racked up 30 last term and was the Scottish Premiership's top scorer with 18. And he soon surpassed the half-century of goals, dispatching a penalty 12 minutes into the second half after Daniel Guerrero had barged Docherty to ground, and completing his treble with a sumptuous back-heel finish from Docherty's fine delivery. That's four goals in two games in the new campaign.

It was the Colombian's last act of the night. Off went Morelos, on came Defoe, the goals continuing to cascade down on a weary St Joseph's defence. They came close to snatching a consolation when Juan Pena was twice denied on the line by Andy Halliday, but the part-timers were filleted again and again.

Defoe knocked in Matt Polster's low cross on 77 minutes, then started and finished a gloriously slick move involving Scott Arfield and a Stewart back-heel to round off an enjoyable shellacking for Rangers and Ibrox. 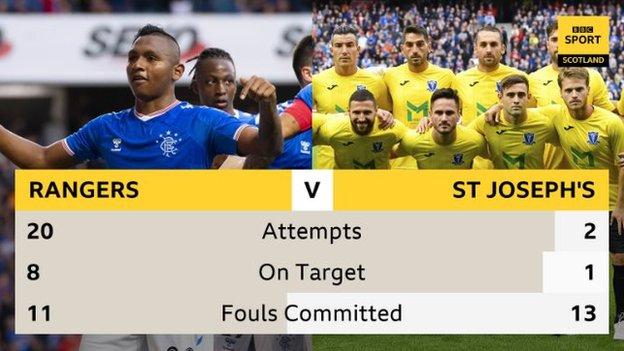 I didn't expect anything else from Rangers. This was a game where Gerrard could allow so many other players to play and make a lot of changes, which is a good thing for Rangers.

They're going to need a big squad this season and I really think they have added to the squad this summer. It's exciting times for the fans, but I'm sure they'll not get too far ahead of themselves.

Rangers need to be in the group stage and trying to progress beyond that as well to go to the next level.