Aberdeen will face Georgian side Chikhura Sachkhere in the Europa League second qualifying round after surviving a scare against RoPS in Lapland.

With the aggregate score level, the Scottish Premiership team were heading out on away goals, but Sam Cosgrove levelled with a first-half penalty and Lewis Ferguson scored in stoppage time to seal Aberdeen's progression.

After being caught cold by the early setback, the Pittodrie side went on to dominate against the Finns.

But their failure to find a winning goal for much of the night, with Cosgrove the chief culprit, left them vulnerable until Ferguson struck.

Aberdeen's damaging end to the first leg - when they conceded in injury time to hand the Finns a lifeline - was quickly compounded in Lapland.

Just 70 seconds were on the clock when the Finns levelled on aggregate. Scott McKenna failed to deal with a long ball under pressure from Aleksandr Kokko and the defender's weak clearance was pounced upon by Kada, whose curling 25-yard strike took a nick off Ash Taylor to fly into the far corner of the net.

That left the Scots needing to score to avoid a first-round exit and they launched their comeback bid with an aerial bombardment. But the lack of killer instinct that cost them at Pittodrie was again evident.

A succession of crosses and high balls towards Cosgrove were dealt with by the hosts before Ferguson looped a header inches wide from a deep Shay Logan delivery.

Aberdeen's penalty shouts were ignored when a Ryan Hedges corner bounced up off the artificial turf and hit a defender's hand but they did not have to wait long. 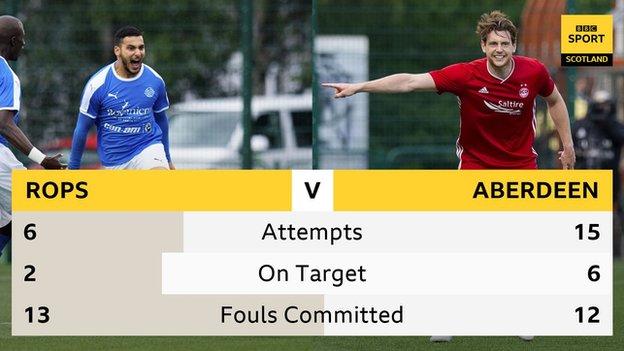 The striker should have added a second to put his side ahead soon after, missing the target with a close-range header after being picked out unmarked by a superb Hedges cross.

Ash Taylor had Reguero scrambling to save his strike from distance after the break and Cosgrove was guilty of another glaring miss when he rose at the back post to head Jon Gallagher's cross into the side-netting.

The impressive Hedges cracked a drive narrowly over, Andrew Considine headed wide and McGinn had a chip tipped over as Aberdeen kept up the pressure.

But McInnes' side were indebted to Lewis for a vital save in the closing stages, rushing out to foil Youness Rahimi, before Ferguson lifted in the decisive goal on the counter.

The 19-year-old midfielder broke clear and, after his shot was well saved by Reguero, did well to dink the rebound over the keeper and in at the far post.

'Aberdeen would wipe the floor with RoPS mid-season' - analysis

Ferguson made a great run in the last seconds of the game and fluffed the one-on-one, but scored the rebound. I think a mid-season Aberdeen would wipe the floor with this team. But it's job done, and they're into the next round.

Aberdeen squandered some chances, so they'll feel a bit rusty. They'll be better for it though, having the two games under their belt. They were by far the better team, but didn't look sharp. Even after going behind very early they had enough in them to take the tie, but it wasn't anywhere near the level at Pittodrie.