Celtic will face Estonian side Nomme Kalju in the Champions League second qualifying round after an ultimately straightforward win over FK Sarajevo.

Leading 3-1 from last week's first leg in Bosnia, the Scottish champions had an early scare when Mersudin Ahmetovic had an effort ruled out for offside.

However, Celtic went ahead through Ryan Christie's smart finish and, although Benjamin Tatar equalised, Callum McGregor's fine finish from distance restored the three-goal cushion and secured a 5-2 aggregate victory.

Celtic will host the first leg next Wednesday against Nomme Kalju, who surprised Macedonian champions Shkendija to progress on away goals.

Celtic's progression was never seriously in doubt, although that early offside effort initially gave home supporters something to ponder.

Sarajevo were always unlikely to overcome the 3-1 first-leg deficit and so it proved. This contest seemed a question of whether Celtic could find a route to break down a well organised side and, in the meantime, build more fitness and confidence.

Midway through the first half, though, manager Neil Lennon appeared to show a little frustration at what he was seeing. There was a lack of tempo and threat.

They suddenly clicked and, after a period of quality possession in which they stretched the visitors, the opener arrived. It was Odsonne Edouard's determination to surge into the box, followed by Christie's fine finish, that quashed any hope of a shock.

That appeared to settle Celtic and chances began to flow, with the visitors unable to break out.

However, as in the first leg, there are lessons to be learned at this early stage of the season. In Bosnia, Lennon's men cheaply conceded, then defended a set-piece poorly to allow Sarajevo the opener. This time, it was real sloppiness from recent recruit Boli Bolingoli that allowed Sarajevo to equalise.

It is something that Celtic can ill afford as they progress through this qualifying process. The opposition will get better and the consequences potentially harsher.

There was no need to panic in this circumstance and McGregor's fine finish ensured a positive home result for supporters to enjoy.

Another positive was the return of Leigh Griffiths as a late substitute. That reintroduction earned a wonderful reception. Once fully fit, the striker may have a significant contribution to make in the months ahead.

The focus now turns to what looks like a favourable tie against the Estonians. 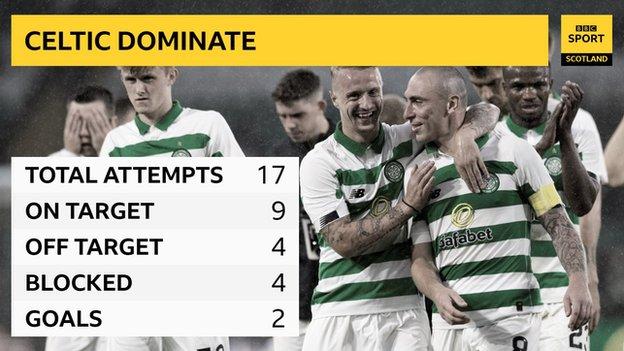 It was a very good performance played at a really good tempo. Two good goals, and the job's done. Hopefully there aren't any injuries and now they're into the next round.

I had no doubt they'd get through. They might be disappointed that they gave away a silly goal, but Neil Lennon might use it as an opportunity to talk to Boli Bolingoli about the defensive side of the game. It was quite visible that he didn't get forward as much after the goal. You can't afford to give the ball away like that in Europe, but he's an exciting prospect.