Like it or not, VAR is coming to the Premier League this season.

England's top flight is one of the last high-profile competitions to get on board with the technology.

VAR (video assistant referee system) has been gradually introduced into most major domestic leagues in the world over the past two years and been used in the Champions League from 2017-18, the 2018 World Cup in Russia and this summer's Women's World Cup in France.

Seen by many as a natural and necessary progression for modern football (video replays are already an integral part of sports such as cricket, tennis and both codes of rugby), it also has its detractors, who fear it could slow the game down and reduce its spontaneity and passion.

So what can Premier League fans expect from VAR next season? And how will the league ensure this step into modernity is as seamless and efficient as possible?

How will it be different in the Premier League?

We'll assume you know the basics of VAR by now. If not, you can catch up by reading our explainer piece, and by watching the video below.

The key thing to know is the Premier League's guiding principle for VAR is that it be used for "clear and obvious errors" and "serious missed incidents" in four types of match-changing incidents:

Keen to preserve the fast pace for which the competition is heralded, the Premier League says that while it will adhere to broader VAR protocol - laid out by world football's law-making body, the International Football Association Board (Ifab) - it has its own nuanced interpretations on the technology's application.

Its aim is to preserve the overriding authority of the on-field referee and achieve "minimum interference" to the game.

Key to both principles is the ongoing, match-long dialogue between the on-field official and their video assistant, much of which occurs in the background without players or supporters being overtly aware.

VAR automatically checks all key incidents during a game, but the video officials' role will be informed by their on-field colleague, who describes to them what they have seen and why they have reached their conclusion.

It is only if the replays show a different version of events to that described by the on-field referee that the VAR team will step in. The on-field referee will then decide whether to accept and act on the VAR official's view of the incident. This may involve the use of the pitch-side monitor, although the Premier League says this will be used sparingly, for incidents either not seen by the on-field ref or for those outside of their expected range.

For offsides, the Premier League is advising assistant referees to flag for clear incidents, but to keep their flag down for tight calls, knowing these will be corrected by VAR should it be required. This should theoretically cut down on attacking sides being wrongly denied a goalscoring opportunity.

In short, the addition of VAR does not alter one of football's golden rules: play to the whistle.

Speaking of which, if a half finishes on a contentious moment that may need a review, referees have been instructed not to blow the half-time/full-time whistle as they normally would - instead there will be one blow on the whistle to indicate a check is under way and play has been halted.

This is intended to avoid a scenario similar to the incident in Germany when a penalty was awarded after the players had already left the pitch for half-time, resulting in the two sides being called back out of the dressing rooms in order for the spot-kick to be taken.

In a move that indicates a willingness for greater transparency, the Premier League will also be the first competition to show replays on big screens once a VAR review process is complete, to ensure supporters in the stadium are as informed as those watching at home. The replay will only be shown if the original decision is overturned. Which brings us to...

How will the viewing experience change?

All 20 Premier League grounds have the technology that allows decisions to be assessed from the VAR hub in Stockley Park, west London.

This will lead to changes in the viewing experience for fans:

Supporters will also notice signs in the stadium and from the referee to indicate VAR reviews are taking place, from subtle to more formal ones. 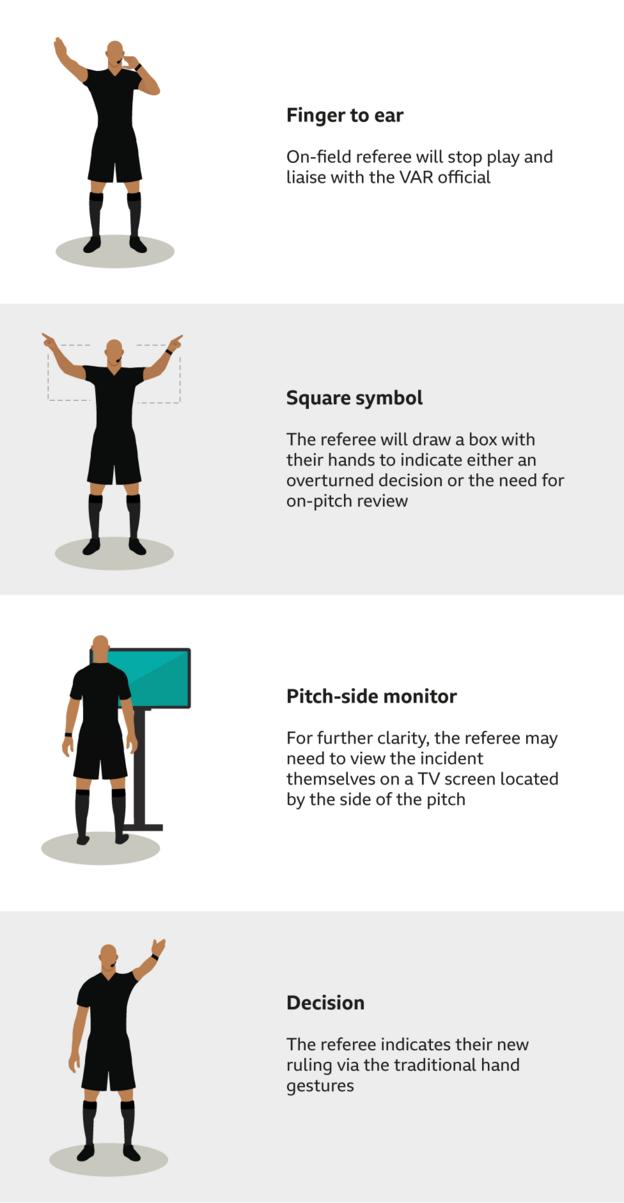 What about goalkeepers moving off their line during penalties?

Ifab introduced a new law shortly before this summer's Women's World Cup on the issue of goalkeeper encroachment at penalties.

It stated keepers must have at least one foot on the goalline when a penalty is taken or, if they are jumping at the time of contact, have one foot in line with it. Infringing this rule resulted in a retaken penalty, a booking for the keeper and a lot of confusion and controversy.

However, the Premier League will not be enforcing this in the same way for the coming season, instead only relying on VAR if the on-field officials fail to spot:

Yes, players could also be disciplined as a result of VAR reviews that indicate simulation, deliberate handball, serious foul play or denying an obvious goalscoring opportunity.

They could also be punished by the referee for aggressively indicating a VAR review should be undertaken (e.g. making the box shape with their hands to an official) or interrupting the review process in any way.

Any member of either side's technical staff who enters the pitch-side monitor area will be immediately sent to the stands, and any player on the bench doing so will be shown a yellow card.

Clubs can still appeal against a VAR decision but there will be a high threshold for winning those appeals.

With all managers and captains having been briefed by the Premier League on exactly how VAR will be implemented in the division, it is hoped such disciplinary aspects will be kept to a minimum.

So why all the controversy in the past?

There are those who are simply opposed to VAR in principle, feeling that it strips the game of the human element - mistakes and all - that makes it so compelling.

Criticism has also been aimed at the delays it imposes on the game while a decision is being reached and the reticence it instils in players and fans to celebrate a goal with the same raw passion when they know it could be ruled out on review.

Also, the integration of VAR into the game has not been without its teething problems as football authorities work out the best way to use it and officials gain the experience of working with it.

In addition, the nature of football dictates subjectivity will always remain for some incidents. So while offsides, for example, are more straightforward black or white decisions, the severity of a foul or the intent of a handball have shades of grey, as Paris St-Germain know only too well after their Champions League elimination by Manchester United last season.

There could be a situation whereby a similar type of incident, such as a bad tackle, could occur simultaneously in two different games, with one receiving a yellow card and the other a red. Neither decision would be wrong.

The Premier League admits this subjectivity makes the eradication of controversy impossible, as is the achievement of 100% accuracy on decisions.

But with the lessons learned from two years of monitoring VAR and a willingness to evolve its approach to the technology, the Premier League now feel it is in a good place to introduce it effectively.