Celtic took a significant step towards the second round of Champions League qualifying after an impressive 3-1 win over FK Sarajevo in Bosnia.

Despite conceding just before the half hour, Celtic wrestled control through a fine strike from Mikey Johnston and a composed finish from Odsonne Edouard.

Scott Sinclair backheeled in a third to give Neil Lennon's side a cushion before next Wednesday's second leg and, should they emerge from that, Celtic seem set to face Macedonian champions Shkendija.

They beat Estonian counterparts Nomme Kalju 1-0 in the away leg of their tie, with the winners of that contest now looking likely to travel to Glasgow on 23-24 July.

Reaction speaks volumes for Lennon's side

Navigating these Champions League qualifying fixtures is always a fraught journey and, given the potential first-round ties on offer, this was one Celtic might have wanted to avoid. That idea was firmly reinforced in the early stages in sodden Sarajevo in front of an intimidating, noisy, home crowd.

The Bosnian champions looked to counter at pace and, after one let off, memories of past away Champions League calamities began to resurface for Celtic.

An unforced error from Jozo Simunovic conceded a cheap corner. It came in from the left and fell just six yards out for Mirko Oremus to slam home to the delight of the raucous crowd. Concessions from set pieces of that kind tend not to result in wins in Europe.

All of a sudden Celtic had answers to find and a heap of Champions League pressure to contend with. The reaction they found speaks volumes given the circumstances. Lennon's men remained calm and firmly asserted their superiority to all but end the tie.

The diminutive figure of Johnston delivered the perfect, timely antidote in spectacular style. He gathered way out in a central area, turned and smashed a magnificent right-footed effort past Vladan Kovacevic. It was the away goal they needed, at a vital moment and it entirely changed this tie.

For all the talk of recruitment over the summer, it is Johnston who has surely done his cause the world of good heading into this new season. On this evidence he could prove a significant figure, assuming the knock that forced him off is not too serious. Similarly, Celtic will be hopeful that the injury that ended new signing Boli Bolingoli's game early will also be minor.

Another plus for Celtic was Odsonne Edouard getting the second goal. His finish was cultured as, rather than snatching at the chance, he waited for the goalkeeper to commit before drinking it past him. The young Frenchman's confidence will grow and, with confidence, he is the potent threat Celtic will rely on.

Three away goals leave Celtic in complete command after what might have been a painful evening. The reaction to adversity might stand them in good stead going forward. 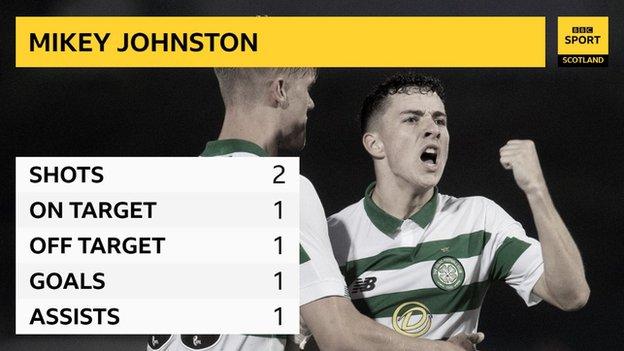 This was supposed to be a really tough tie but, apart from the first 15 minutes, I thought Celtic bossed the game. They had players that were willing to take the ball and pass it.

Scott Brown was outstanding in the middle of the park, it was a fantastic strike from Mikey Johnston, and the second half was a composed, disciplined performance. To win 3-1 away from home will make Neil Lennon a happy man.