Fan groups from Liverpool, Arsenal, Chelsea and Tottenham have been given backing to demand Uefa improve access to major finals.

A six-point proposal by the fan groups was approval by Football Supporters Europe (FSE) on Saturday.

FSE represents fans across Europe and can now take the proposals to Uefa.

The groups say "supporters deserve much better when the finals are played".

Joe Blott, chair of the Spirit of Shankly Supporters' Union tweeted: "Really proud to represent @spiritofshankly today and speak to our motion.

"Even more delighted that it was passed unanimously and the message will now be taken to Uefa loud and clear - we are no longer going to tolerate your dismissal of fans."

What are the six proposals? 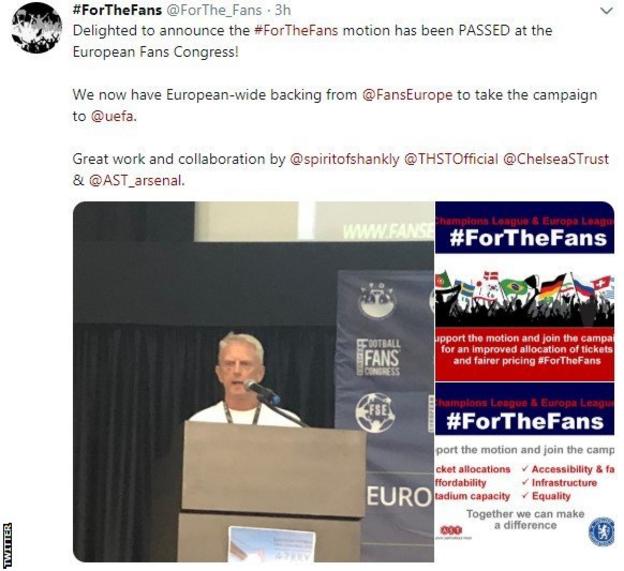 Liverpool secured a Champions League final win over Tottenham in Madrid on 1 June, while Chelsea claimed the Europa League with victory over Arsenal in Baku, Azerbaijan, on 29 May.

In the build-up to the finals, supporters' groups told BBC Sport they would raise issues fans were facing early in the next season rather than wait to see how teams reaching the finals in 2019-20 were treated.

Arsenal and Chelsea shared just 12,000 of 68,700 seats for their final, with fans highly critical of the logistical difficulties involved with getting to Baku.