Former Newcastle manager Rafael Benitez says the club "did not share his vision" as he outlined for the first time his reasons for leaving.

The Spaniard, whose contract expired on Sunday, said he felt like he "belonged" at the club and wanted to stay.

But Benitez, 59, indicated he wanted a longer-term deal, rather than just a contract extension.

"It became increasingly clear to me that those at the top of the club did not share the same vision," he said.

The Magpies finished 13th in the Premier League in May as Benitez, who took over in March 2016, secured the club's top-flight status.

"I wanted to stay, but I didn't just want to sign an extended contract, I wanted to be part of a project," said Benitez in a letter to fans.

"I'm very sad about that, but I do not regret for one moment my decision to come to Tyneside and I'm very proud about what we achieved together."

Newcastle appointed Benitez as successor to Steve McClaren with 10 games of the 2015-16 campaign remaining, as the club were placed one point from a position of Premier League safety.

The former Valencia, Liverpool and Real Madrid boss could not prevent the club from being relegated but they won the 2016-17 Championship title to secure an immediate return.

There was speculation about Benitez's future prior to the club announcing his departure, as he received a £12m-a-year offer to take over as manager at Chinese Super League club Dalian Yifang.

Manchester City assistant Mikel Arteta is the current bookmakers' favourite to take over at Newcastle, with Garry Monk, David Moyes and Roberto Martinez among others linked with the job. 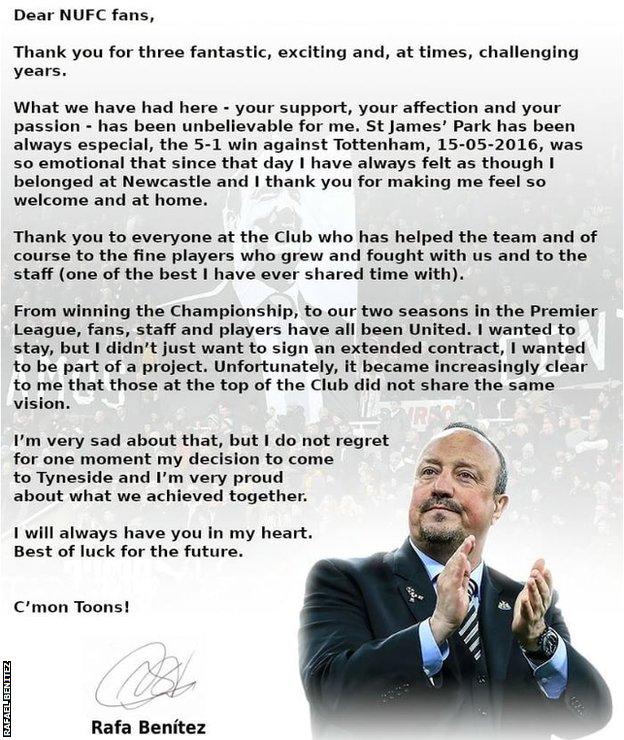