Leyton Orient's late manager Justin Edinburgh will be honoured by Cheltenham fans on the opening day of the season after their target for a memorial flag was reached in only five hours.

Orient host Cheltenham on 3 August in what will be their first match back in League Two and first competitive game since Edinburgh's death on 8 June.

More than £500 has been raised on an online crowdfunding page for a giant flag with an image of Edinburgh and the words "he made you dream again".

Two Cheltenham Town fans' groups - 1887 Red Army and Robins Trust - said they "want to create a fitting tribute" on what is expected to be a "hugely difficult and emotional day for Orient fans".

"We hope this tribute will show the love and empathy of the entire football community," they posted on the fundraising page.

Former Tottenham defender Edinburgh, who guided Orient to the National League title in April, died at the age of 49 after suffering a cardiac arrest.

Additional money raised will go to the Justin Edinburgh 3 Foundation - a cause set up by his family.

The foundation, which is aiming to support a charity related to heart and brain health, will also be campaigning to change the law to ensure all health and fitness clubs across the United Kingdom are equipped with defibrillators. 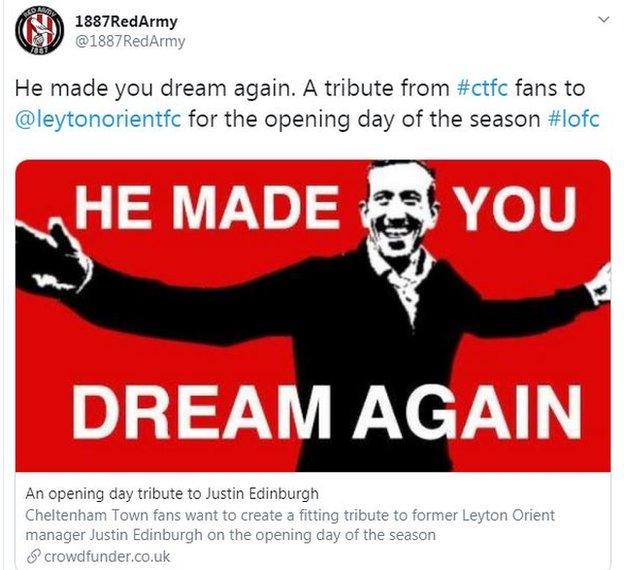