Aaron Wan-Bissaka scored an own goal deep into injury time to hand France a 2-1 victory over England in the opening game of their European Under-21 Championship campaign.

Phil Foden had put England ahead in the second half after Dean Henderson had earlier saved Moussa Dembele's penalty.

Houssem Aouar then missed a second penalty after Hamza Choudhury was sent off for a rash challenge in the box.

Jonathan Ikone equalised late on before Wan-Bissaka put into his own net.

"The sending-off ultimately gave us our biggest problem," manager Aidy Boothroyd told Sky Sports. "As brave and battle-hardened as the team are, it was just too much to take.

"After all the drama I think 1-1 would have been fair, but football's not fair, is it? I think some of the football was outstanding, and Foden's goal was a gem."

England dominated the opening moments and could have gone in front on 15 minutes when Ryan Sessegnon's cross was deflected onto the post by Ibrahima Konate before Dominic Solanke's sliding effort drifted just wide.

But it was goalkeeper Henderson who made the first telling contribution for the Young Lions as he kept out Dembele's spot-kick with a good diving save to his left, after England captain Jake Clarke-Salter was adjudged to have handled the ball in the area.

Both sides impressed in a breathless first half put neither could find a goal and it took a moment of magic from Manchester City's Foden early in the second half to break the deadlock.

The 19-year-old weaved through the French defence before applying a precise finish from just inside the area to hand England the lead - with what proved to be his side's only shot on target.

But France grew in confidence as the game went on and they soon had another chance from the spot when, after an ill-timed lunge on Jonathan Bamba in the box, France were awarded another penalty and Choudhury was sent off after the referee consulted VAR.

From then on France dominated and they could have scored well before the 89th minute had it not been for an inspired performance from Henderson and some excellent last ditch defending.

But Lille forward Ikone eventually found a breakthrough as he drove infield and shot low past Henderson.

And it was then a cruel end for England and Wan-Bissaka, who looked shaky throughout, as he miscued a clearance from a corner into his own net in the fifth minute of added time.

England boss Boothroyd said his side "could not afford to slip up" coming into opener in Cesena but it was their own sloppy errors which cost them.

And there was no denying Choudhury's lunge on Bamba was both a red card and a penalty.

But they were sloppy in possession for large periods with Wan-Bissaka, who has been heavily linked with a move to Manchester United, one of the main offenders.

Furthermore, France seemingly carved through their backline at will and Henderson did particularly well to deny Dembele in the first half, with the Lyon striker bearing down on goal.

So there is no doubt Boothroyd will be looking for a much-improved performance in his side's next two games.

England now trail in Group C after France and Romania beat Croatia in their opening games and Boothroyd's side face an uphill battle to progress.

Realistically, they need to win their next two games against Romania on Friday and then Croatia on Monday, as only the group winner automatically qualifies for the semi-finals, as well as the best-placed runner-up. 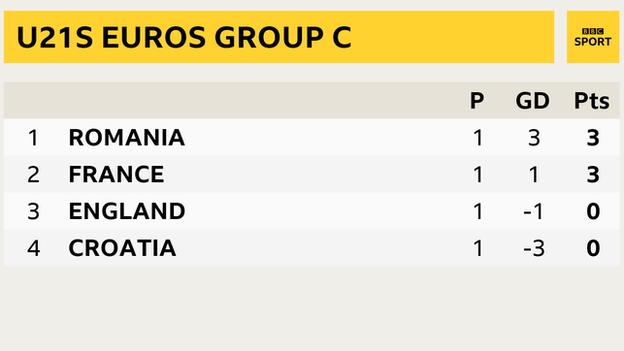 View all Euro Under-21 Championship results