Scotland are out of the Women's World Cup after a twice-taken added-time penalty gave Argentina a dramatic draw.

The Scots needed to win and Kim Little turned in their opener with Jen Beattie and Erin Cuthbert netting from corners.

It was 3-2 after Milagros Menendez scored and a Florencia Bonsegundo shot went in via the bar and Lee Alexander.

A VAR-awarded spot-kick taken by Bonsegundo was saved by Alexander but she was off her line and, agonisingly, the striker scored second time around.

With 16 minutes to play, Shelley Kerr's Scots were on course to be one of the four best third-placed sides going into Thursday's final fixtures in Groups E and F but Argentina's recovery consigned the Scots to bottom place in Group D.

And Scotland captain Rachel Corsie was unhappy that referee Hyang-ok Ri allowed an Argentina free-kick to be taken while substitute Fiona Brown was coming on, with another substitute, Sophie Howard, ultimately penalised for her challenge on Aldana Cometti.

For the third match running, Scotland conceded a penalty that cost them points.

Their opening two defeats by England and Japan had followed a similar pattern - two goals down including a spot-kick by half-time and a late rally producing a consolation goal.

The players and Kerr had spoken of the need to start the game on the front foot and that intent was clear as Cuthbert volleyed wide in the first minute.

Scotland's play was less nervous than it had been in the first two games but they were dealt a real scare when Mariana Larroquette headed against the crossbar from Bonsegundo's cross and Alexander had be alert to block Sole Jaimes' shot in the aftermath.

The Scots' response was brave, bold and ultimately rewarded. Cuthbert forced her way through the Argentina defence to shoot from the inside left channel and though Vanina Correa saved, Cuthbert had the presence of mind to turn the ball back for the outstretched foot of Little to touch home her 54th international strike.

The goal had come at a good time, just as Argentina were growing into the game, and the second prevented Carlos Borrello's side building any momentum at the start of the second period.

Caroline Weir's initial delivery from a corner was poor but the ball was recycled and the Manchester City midfielder floated the ball perfectly on to the head of Arsenal-bound Beattie, who found the net for a 23rd time on Scotland duty.

The Scots were not content to sit on their lead and Cuthbert was not prepared to give Argentina's backline a minute's peace, forcing Correa to turn wide after another driving run.

And the Chelsea forward got the goal her performance deserved when she tucked in the rebound after Correa had turned Leanne Crichton's header on to the post.

However, the turning point came when Dalila Ippolito fed fellow substitute Menendez to finish calmly past Alexander before Bonsegundo's shot hit the bar and evaded the Scotland goalkeeper over the line.

With stoppage time came more twists and turns and a cruel end for Scotland.

Howard tripped Cometti and the referee was advised to view the incident again. She pointed to the spot and Bonsegundo's shot was blocked by Alexander.

But VAR was called into play again with Alexander judged not to have had at least one foot touching the goalline when the kick was taken and Bonsegundo fired in the retake.

The match had already surpassed the suggested four minutes of added time and finished with a whimper with the players initially not realising the final whistle had blown as the assistant referees came on the to pitch. 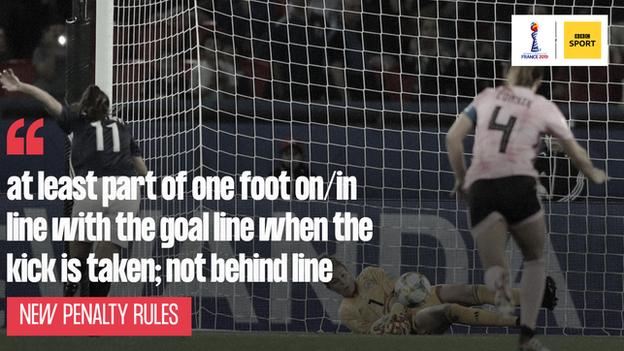 It has to be heartbreaking. As a goalkeeper, you take your cues from the body of the striker - the way in which they plant their foot beside the ball and if they open their hips or if they don't open their hips tells you where they're going to go.

Lee has trained for 27 years in that way and now at a World Cup we're saying, 'no, you can't train that way, you have to train a completely different way'. It's ridiculous. I think we're going to have this World Cup decided by VAR with inexperienced officials who haven't had the ability or opportunity with this and I think that's wrong. Football should decide this World Cup, not VAR.

Little, Beattie and Cuthbert got the goals but Weir's class was every bit as vital to Scotland's periods of dominance.

The midfielder's use of the ball in both halves gave Scotland momentum and she had a hand in two of the goals.

BBC Sport has launched #ChangeTheGame this summer to showcase female athletes in a way they never have been before. Through more live women's sport available to watch across the BBC this summer, complemented by our journalism, we are aiming to turn up the volume on women's sport and alter perceptions. Find out more here.