Cristiano Ronaldo is not a man who shares the limelight.

From the 57th to the 88th minute of Wednesday's first Nations League semi-final between Portugal and Switzerland, the video assistant referee (VAR) looked to have established itself as the night's big talking point.

Referee Felix Brych's technology-assisted decision to wipe out his on-field call of a Portugal penalty and instead award the Swiss a spot-kick for an incident seconds earlier was certainly a headline-hogging moment.

But having scored once prior to the penalty, Ronaldo was not to be outshone.

With two minutes remaining, the hosts' talisman took control when he caressed his second past Yann Sommer, before completing a terrific hat-trick in injury time to send his country to Sunday's final.

BBC Sport looks back on another decisive night for the man his manager calls a "footballing genius".

88 and counting - what the numbers tell us

Ronaldo is the top international European goalscorer of all time with his treble on Wednesday taking him to 88 goals in 157 appearances, and he is showing no signs of being caught any time soon.

The former Real Madrid and Manchester United forward is 32 goals ahead of any active European player, with Robert Lewandowski still leading the line for Poland on 56.

Only the tally of Iran's Ali Daei (109 in 149 appearances) is better than Ronaldo's in world football.

The Juventus forward's latest hat-trick against Switzerland was his seventh for Portugal and his 53rd for club and country.

And here is a few other records to add to the list...

Ronaldo's display had his manager, team-mates and the BBC Radio 5 Live pundits waxing lyrical about his talent, timing and longevity...

Portugal coach Fernando Santos: "In terms of adjectives to describe Ronaldo's game, I've used many. I was his coach in 2003 and I could see where he'd go. He's a genius. There's genius paintings and sculptures and he's a football genius."

Portugal midfielder Bernardo Silva: "We're used to this kind of thing, he's been doing it for ages and it isn't a surprise to anyone now. He scored three… nothing new for him. He's often the difference maker."

"The second goal was such a wonderfully worked move and he knew exactly what he wanted to do. It's a goal of beauty the way he finishes it off. Then it's a double step-over with a bending finish for the third. He is so hungry and he still moves like an Olympic athlete. He is 34 and he has no right to move like that.

"He is a real leader for this Portuguese team and it tells you everything about the way he leads his life. It's a possibility that he could carry on playing until he is 40.

"He was the difference on the big stage once again. He has changed his game over the years. Ruthless Ronaldo."

BBC Radio 5 Live commentator Ian Dennis: "They rested him in the qualifiers for these finals and you knew he meant business for this evening when he was smiling and applauding the fans after receiving a great reception in the warm-up."

Former England international and BBC Radio 5 Live pundit Chris Waddle: "You expect that every game from Ronaldo. Switzerland were playing well but he is a top-class goalscorer and all three of them were good goals.

"Years ago he was a dribbler with bags of pace but now he is a goalscorer and he has kept himself so fit.

"There is no reason why he cannot play at 40. His game has developed and his coaches do not ask him to chase back against full-backs because it means he is fresh when he gets it. You have to have that out ball and he is the one." 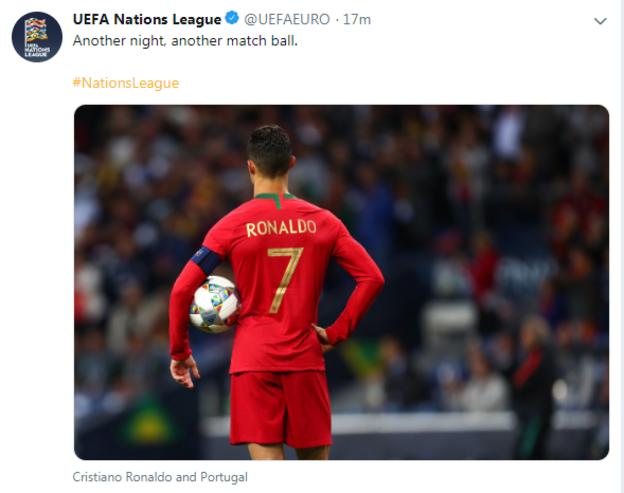 While Ronaldo will get all of the plaudits, this was not one of his most vintage performances.

The 34-year-old had just four touches in the box during the whole game as part of 49 touches overall (only the eighth highest of the Portugal players taking part in the game).

However, two of those four touches in the Swiss area ended up in the back of the net, and when you couple that with a 100% strike rate from just three shots on target, the numbers indicate just how clinical he was.

Portugal will now face either England or the Netherlands in the final on home soil, and with Ronaldo in rampant mood, the odds may just be stacked in the hosts' favour.

Josh: Ronaldo has an off night and scores three outstanding goals, typical of the brilliance of the man.

Dan, London: Messi is the greatest player of all time, but there has never been a WINNER like Ronaldo - no one is close.

Sanna boy: Cometh the hour, cometh the man. Love him or loathe him, Ronaldo is something special.

Ach, Newham: If there's a better player than Ronaldo ever, I'd love to see him. Can't think of anyone though.