With the season over and the transfer window open, Premier League clubs are set to open their wallets and start spending.

But when you are shopping for anything, it's a good idea to look at what you've already got in order to work out what you need.

In analysing the profiles of all 20 squads, we picked out six clubs facing a particularly interesting transfer window.

After achieving an incredible 97 points in the Premier League and winning the Champions League, Liverpool are expected to stick mostly with what they have.

With so many first-team players at the peak of their careers, there is little need for the club to twist again in the transfer window like it did last summer. 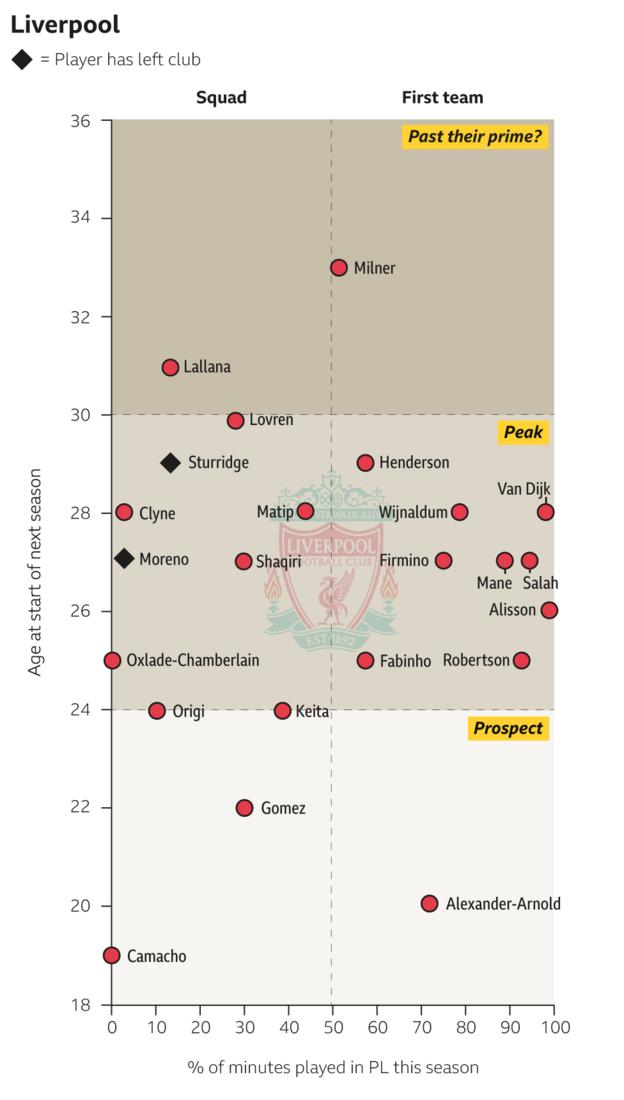 James Milner is the only first-team player this season over 30 and is in sufficiently good shape that he's likely to still be a part of Jurgen Klopp's plans next season.

With Alberto Moreno and Daniel Sturridge poised to leave, the Reds will need to make some additions to the squad, although a fully-fit Alex Oxlade-Chamberlain will be 'like a new signing'™ for the midfield.

Klopp said in March that the best way to achieve success is to "bring together a group of players, try to develop them all together and then stay together for a while".

Expect this group to challenge together again next season.

Chelsea: Time for the youngsters?

Chelsea's traditional reliance on experience paid off once again this season as they claimed a third-placed finish and the Europa League.

But with players leaving and a transfer ban looming, the London club might have to break with tradition and turn to youth.

Fortunately for Maurizio Sarri, or whoever replaces him if he leaves, the Blues do have a strong group of players at their peak. 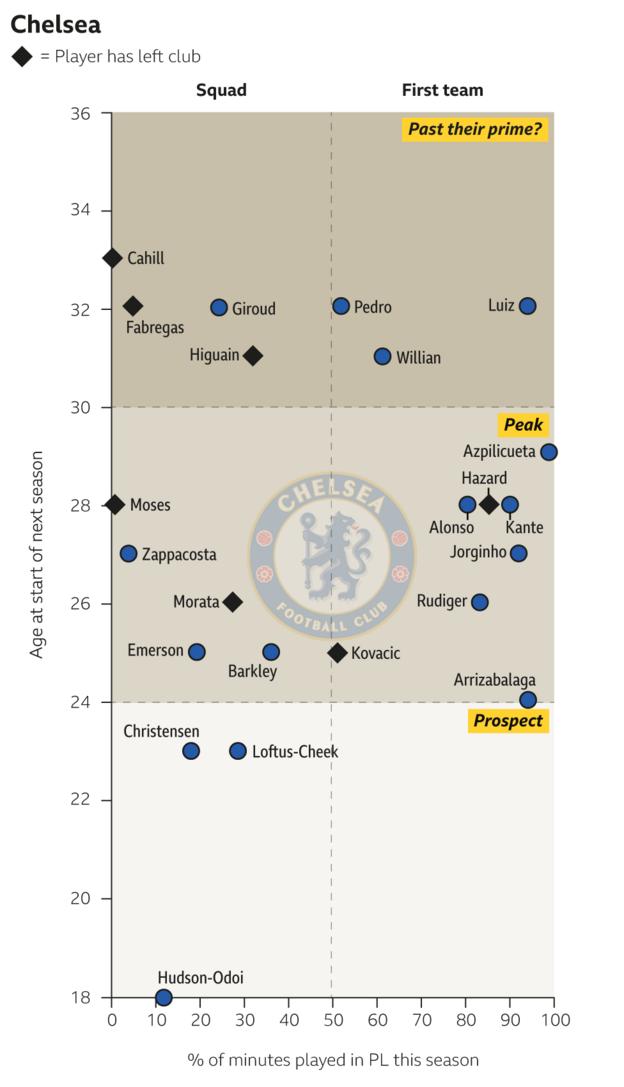 But the departure of Eden Hazard to Real Madrid is a huge blow, with the Belgian's boots almost impossible to fill.

The arrival of 20-year-old United States forward Christian Pulisic will bravely attempt to do that, as well as provide competition to the ageing Willian and Pedro.

And there could be good news for serial loanees such as Tammy Abraham and Michy Batshuayi, especially given the various struggles of Chelsea's strikers this season.

With opportunities potentially arising for younger players, it's unfortunate that Ruben Loftus-Cheek and Callum Hudson-Odoi have suffered serious injuries that will keep them out for quite a while.

Man Utd: The start of an overhaul

After finishing outside the top four for the third time in four seasons, Manchester United manager Ole Gunnar Solskjaer has admitted the club "will need players in".

But after a season of below-par performances, for many fans it's about which players the club can get out. Just look at the number of big-money players in this chart who played fewer than 50% of minutes in the league in 2018-19. 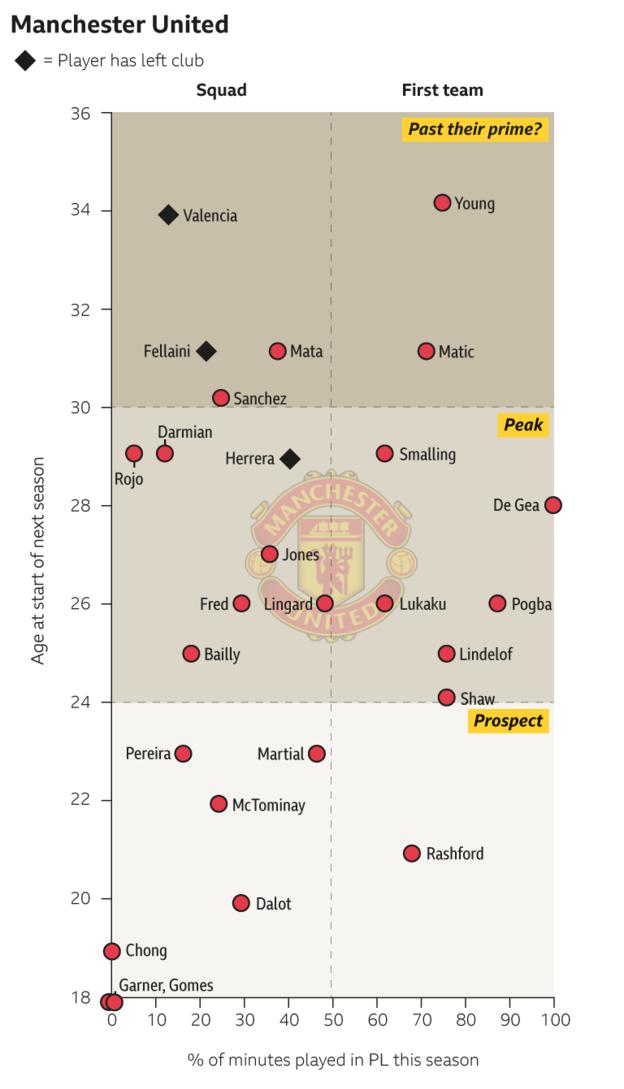 With Marouane Fellaini gone, Ander Herrera and Antonio Valencia going and Juan Mata out of contract, the full-back position and midfield are likely to be the club's focus, especially with Ashley Young turning 34 in July.

Solskjaer could, however, see it as an opportunity to give the youngsters Diogo Dalot, Scott McTominay and Andreas Pereira a chance and focus on spending in other areas.

Above all, one of his main tasks will be to find a settled first XI among his squad. Paul Pogba was the only outfield player to start 30 games, compared to six players at Liverpool and seven at Chelsea who did so, and even his future is far from certain.

The club's scatter-gun approach to recruitment and constant changing of managers means Solskjaer will need more than one transfer window to get the team back on track.

Of all the squads in the Premier League, Leicester's is the one most in transition, with very few players actually at the peak of their careers. 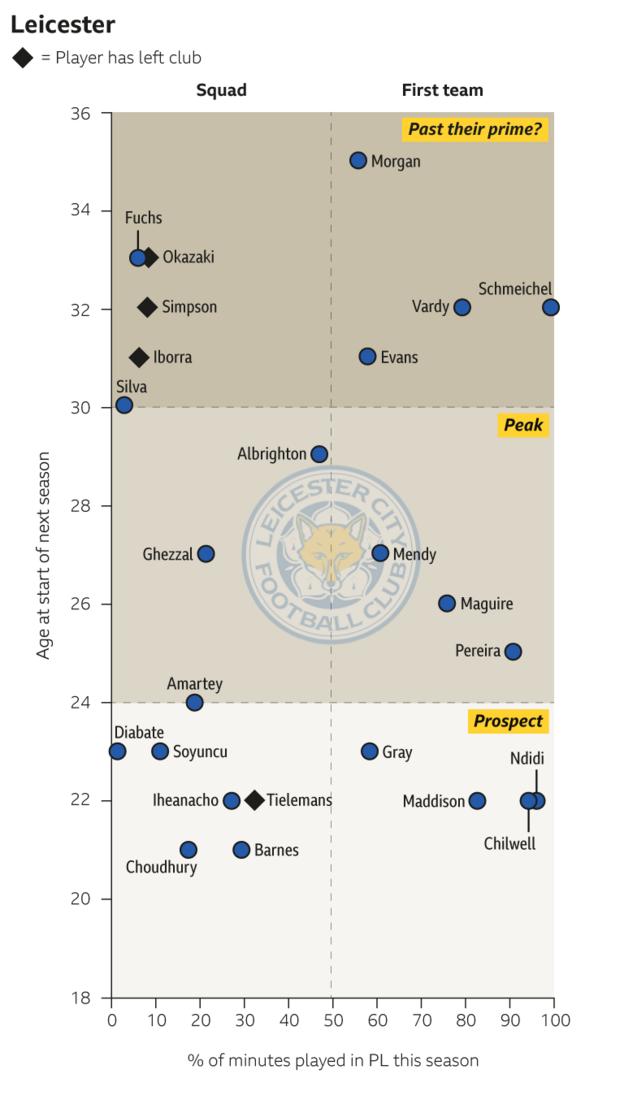 While the likes of Kasper Schmeichel and Jamie Vardy are still key players, many of the club legends that won that incredible title three years ago are not, and have been replaced by an exciting group of relative youngsters led by Ben Chilwell, Wilfred Ndidi and James Maddison.

After his impressive loan spell, the club's biggest task this summer will likely be trying to sign Belgium midfielder Youri Tielemans on a permanent basis to add to the promise that already exists.

With Chilwell and Harry Maguire established in the England set-up and four Leicester players in this summer's England Under-21 squad for the European Championship, it's clear why taking charge of a squad with such an exciting future was too good an opportunity for former Celtic manager Brendan Rodgers to turn down.

While only Watford had an older starting XI on average last season, relying almost exclusively on players at the peak of their careers means the club will enjoy their fourth successive season in the Premier League.

The exception to that rule was 19-year-old midfielder Dwight McNeil, as the chart below illustrates so starkly. 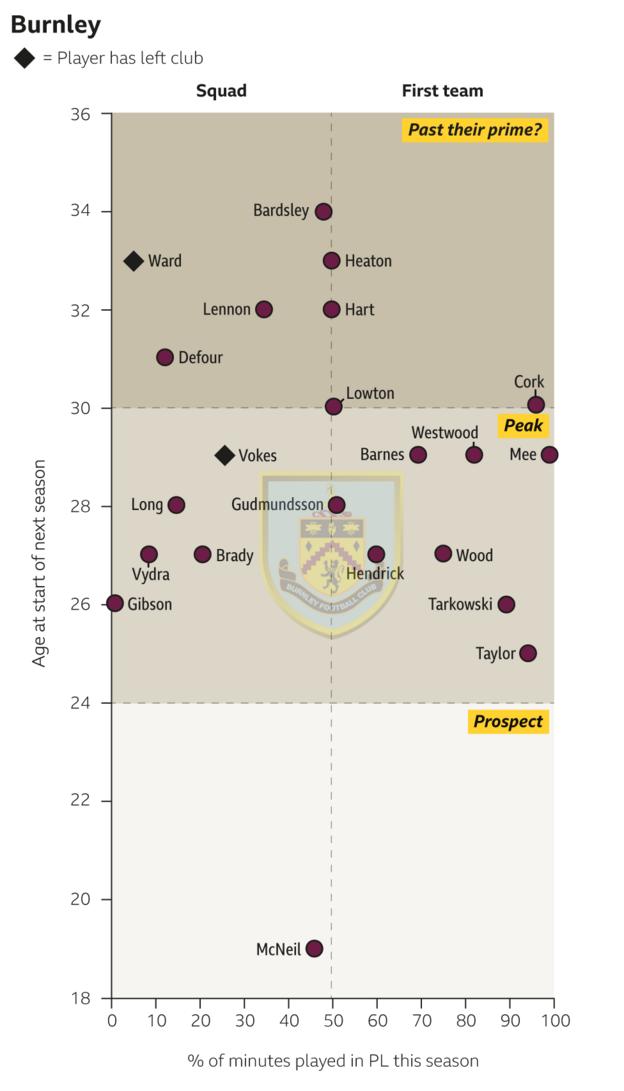 That Sean Dyche showed such trust in the youngster to start him ahead of experienced players during their fight against relegation shows just how talented the midfielder is.

The club's signings last summer weren't trusted quite so much, however. While Joe Hart eventually lost his place in goal to Tom Heaton, the £26 million pair of Ben Gibson and Matej Vydra started just four games between them.

Brighton: new manager... but burned by past spending?

After inheriting a squad that finished just two points above the relegation zone, new manager Graham Potter will undoubtedly want to make some signings, but it will be interesting to see what he can achieve with the current group of players. 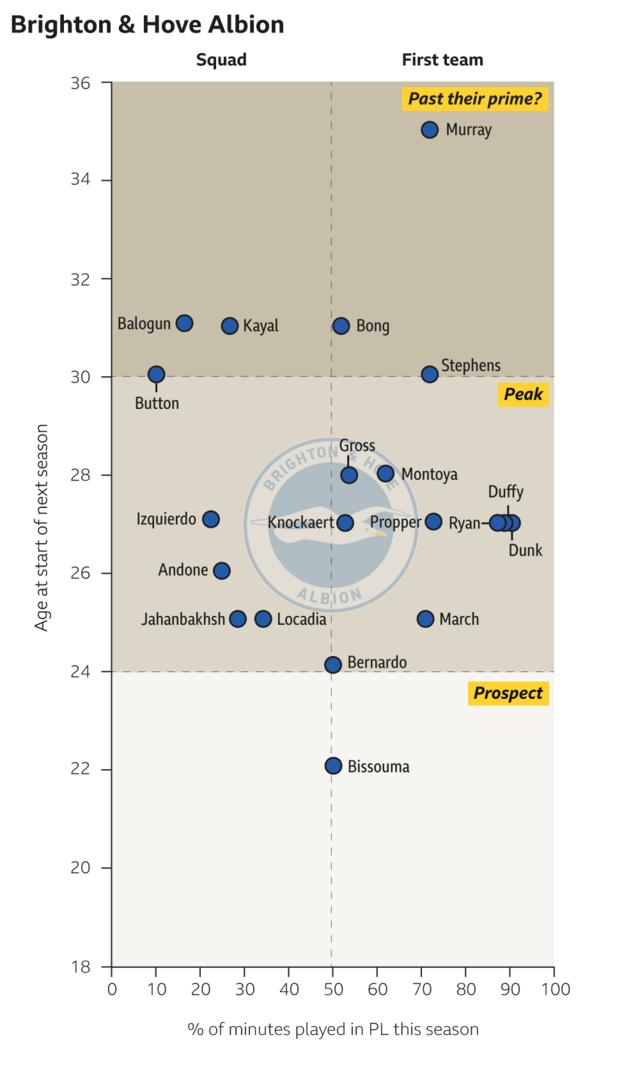 He was the only player to score more than five Premier League goals for the club last season, but 35-year-old Glen Murray will not be able to carry Brighton's goalscoring burden forever, so a new striker will likely be high on Potter's shopping list.

The club spent almost £60 million on the quartet of Yves Bissouma, Jose Izquierdo, Alireza Jahanbakhsh and Jurgen Locadia but none of them fully established themselves under Potter's predecessor Chris Hughton.

With such a huge outlay, Potter will likely be encouraged by the club to get the most out of them.

Like Burnley, the club's fight against the drop meant Hughton generally relied more on players at their peak rather than promising youngsters.

Given that only Brentford had a younger starting XI on average than Potter's Swansea in the Championship, that could well change.