The English Football League season comes to an end this weekend at Wembley with three promotion places decided in the play-off finals.

Nothing is certain in a one-off game and all the pressure that comes with it. But stats from past finals can tell you a lot.

On a Bank Holiday weekend that will see attendance records broken, curses tackled and a repeat of a classic final, Gracenote head of sports analysis Simon Gleave takes a closer look at what might happen.

Aston Villa are the 12th team to return to the play-off final a year after losing one.

After the heartbreak of defeat by Fulham 12 months ago, the encouraging news for Villa fans is that nine of the previous 11 have won promotion at the second time of asking.

A tenth - Leicester City - returned for a third time in succession to finally win against Derby in 1994.

Last year, Exeter City joined the Foxes as the only two teams to miss out on promotion in successive play-off finals following their defeat by Coventry.

Another stat favouring Villa is that every returning team changing managers between successive play-off finals - Crystal Palace 1997, Gillingham 2000 and Huddersfield Town 2012 - has been promoted at the second attempt. Dean Smith replaced Steve Bruce in October.

After four successive Championship play-off finals with a foreign manager in charge of at least one of the teams, this year's features two English bosses - Villa's Smith and Derby's Frank Lampard.

The Rams were also one of the finalists the last time this happened as Steve McClaren lost to Harry Redknapp's QPR five years ago.

At that point the only foreign managers to take charge of second-tier play-off finalists were Ossie Ardiles (Swindon, 1990) and Gianfranco Zola (Watford, 2013).

They have been joined by five others since then but Leeds boss Marcelo Bielsa failed to join them this year following their dramatic defeat by Derby.

Lampard's side will make a fourth trip to Wembley to attempt to win promotion to the Premier League after reaching this stage in 1994, 2007 and 2014, winning the second of those three finals.

Derby's opponents in the 1994 final, Leicester City, are the only other team to play in four second-tier play-off finals at Wembley.

Leicester lost in the 1992 and 1993 finals but following their 1994 success they won the 1996 final against Crystal Palace courtesy of a Steve Claridge goal deep into injury time.

The curse of red and white stripes

Play-offs guru Richard Foster, author of The Agony and the Ecstasy, the definitive book of the competition, has discovered the remarkable curse befalling teams that usually wear red and white striped shirts and black shorts.

In the 13 play-off finals featuring Brentford, Exeter City, Lincoln City, Sheffield United or Sunderland - none of these sides have won.

Sunderland did earn promotion from a play-off match in 1990 but had actually lost the final before going up at Swindon Town's expense due to financial irregularities at the Robins. Could Sunday be the day that streak is broken?

League One final is first repeat

Twenty-one years ago, Charlton Athletic and Sunderland met in a pulsating second-tier play-off final with the Addicks winning promotion to the Premier League. The match finished 4-4 after 120 minutes before Charlton went on to win 7-6 on penalties.

Now, in 2019, the same two clubs meet again in a play-off final - the first time this has happened since they were introduced in 1987.

If it is as exciting as the match in 1998 which featured lead changes, goals in extra time and 14 penalties to decide the match, neutrals will be in for a treat.

That play-off final was finally decided when the only left-footed player in the shootout, Michael Gray, became the only player to miss from the spot.

A long wait for Tranmere

Tranmere Rovers' appearance in Saturday's League Two play-off final marks an end to a 28-year gap between finals for the club.

In 1990 and 1991 they played in the first two third-tier finals at Wembley, becoming the first losing finalist to reach the final again the following year.

In fact they even dropped out of the league for three seasons, returning a year ago after winning the National League promotion final at Wembley.

Middlesbrough had a gap of 27 years before their play-off final appearances in 1988 and 2015 but Tranmere Rovers have increased that by a year.

Attendance record set to be broken 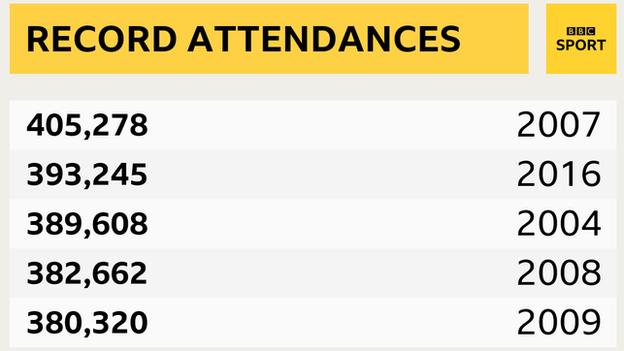 With crowds totalling 243,227 in the 12 play-off matches played so far this season, 2019 is set to smash the record for play-off attendances.

This weekend's finals need a total of 162,052 to walk through the turnstiles at Wembley to be a new record for the Football League play-offs.

Big crowds are expected for both the Championship and League One finals so this year is likely to be the most successful yet for ticket sales.

Who is going up?

Five of the six most likely play-off finalists picked by the Euro Club Index before the play-off semi-finals have made it to Wembley.

Only West Bromwich Albion fell by the wayside, losing on penalties to Aston Villa.

The finals are all reasonably tightly matched with Newport County the strongest favourites to win promotion of the six competing teams according to the Euro Club Index.

Sunderland are slight favourites against Charlton Athletic in Sunday's League One play-off final.

There is virtually nothing between Aston Villa and Derby County in Monday's Championship final. Perhaps Villa's experience from last year will prove the deciding factor.