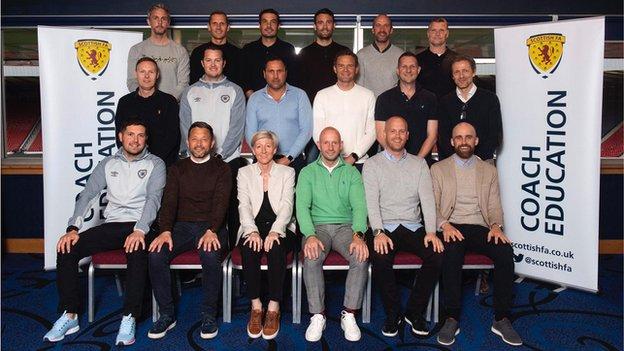 Pauline MacDonald stands out on the Scottish FA's Uefa Pro Licence course. Of the 22 students enrolled this year, the national under-17 women's coach is the only female.

The likes of former Rangers and Newcastle United attacker Peter Lovenkrands, Hearts first-team coach Jon Daly, and Ross County co-manager Stuart Kettlewell are among her class-mates. Shelley Kerr, who will take Scotland to this summer's Women's World Cup, and Pauline Hamill, who coaches the national under-19 side, are the only other women to have been invited previously.

For MacDonald, that backdrop made her first day in class a daunting prospect. "The first two days, I'm not going to lie - I was extremely nervous about the environment, especially with the level of candidate on the course," says the 44-year-old, who was put forward by Kerr and Scottish FA performance director Malky Mackay.

"But I've settled in well, the guys have been fantastic and it's an environment and an opportunity I have to embrace to get the most out of it for my learning."

'Girls are very different to coach'

It is a long way from her days as an eight-year-old, playing for her local primary school in Markinch and kicking a ball around in the street with boys.

MacDonald thrived, but her mum had other ideas. "She sent me to every type of dance class going," she says. "In the long term, it probably helped my body awareness, physical literacy and co-ordination. However, there was only ever one love for me." 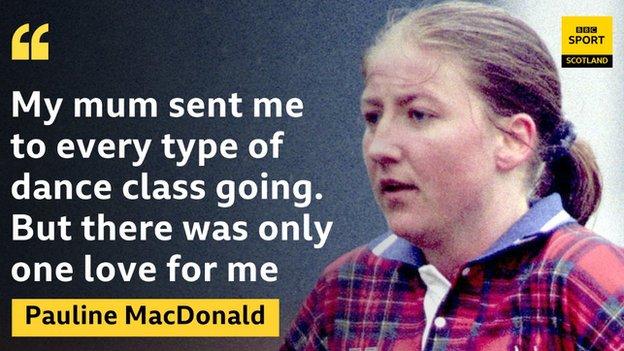 By the age of 11, the Fifer was playing alongside footballers often a decade older, and went on to represent Cumbernauld, Cove Rangers and Stenhousemuir. She moved to America in 1998 to play for Miami Gliders and then Atlanta Classics, before returning to these shores with Arsenal and then Edinburgh City. All while winning 65 caps for Scotland.

That experience is now being put to good use looking after the welfare and growth of Scotland's best young female players - work that is complemented with two or three days a month on the Pro Licence, which is spread over 360-400 hours in total.

During that time, the students are given talks by other coaches and put through "intense, high-pressure" practical scenarios, and MacDonald has also been picking the brains of her class-mates.

"The men's game is a lot quicker, so my decision-making has to be a lot quicker as well," she says. "Girls are very different to coach - they like to ask a lot of questions and sometimes like to be told 'don't'. Girls can be more sensitive whereas boys can brush it off a bit more easily."

Managing in the men's game is not something MacDonald has considered, but she would like to succeed Kerr as national team coach one day.

"I think looking after the A team is always in my sights," she says. "You have to know where you want to go as a manger, coach and leader and, for me, there are so many opportunities in the women's game.

"It has given me so much. My passion and desire is to give back to that game and allow the players I work with to have the same wealth of experiences and success and happiness from that, that I did."

BBC Sport has launched #ChangeTheGame, bringing more live free-to-air women's sport across the BBC this summer than ever before. Complemented by our journalism, we are aiming to turn up the volume on women's sport and alter perceptions. Find out more here.