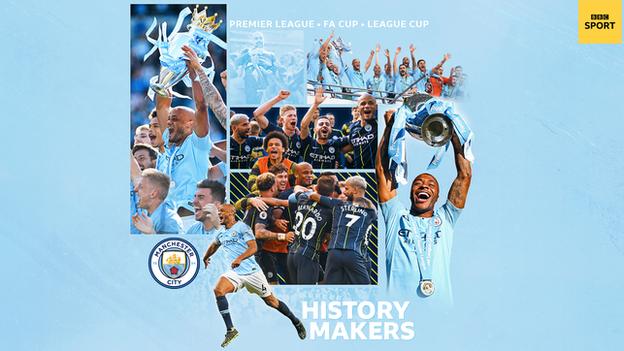 Manchester City's latest triumph means they have become the first English men's team to complete a domestic treble, taking yet another place in the history books.

It means that - after also winning the league and the Carabao Cup last season - they have now lifted five of the past major six domestic trophies available.

And if you count the Community Shield, as Pep Guardiola seems to, you can make that six out of seven.

How impressive is City's domestic treble?

Very. But a similar feat has been achieved by an English club before. Just not by a men's team.

As Guardiola pointed out in his pre-FA Cup final news conference, Arsenal Ladies won the domestic treble, plus the women's Champions League title, in 2006-07.

In fact, prior to City's win at Wembley, England was the only country in the British Isles not to have witnessed a domestic treble from a men's side. Multiple teams from Scotland, Wales, Northern Ireland and the Republic of Ireland have all completed the feat.

Scottish champions Celtic could even take their domestic treble tally to six by beating Hearts in the Scottish Cup final on 25 May. Victory would see them complete an unprecedented treble treble.

Returning to English soil... While a domestic treble has eluded them, Liverpool and Manchester United have both won arguably more highly prized continental trebles.

In 1983-84, a Liverpool side led by Joe Fagan - and featuring Mark Lawrenson, Graeme Souness and Kenny Dalglish - claimed the old First Division title, the League Cup and the European Cup, having been knocked out of the FA Cup in round four by Brighton in late January.

And who could forget United's famed Treble of 1998-99? Sir Alex Ferguson's star-studded team won the Premier League, the FA Cup and the Champions League. But they missed out on the League Cup after being eliminated by Tottenham in round five in early December.

Liverpool completed a unique treble of cups in 2000-01, too, winning the FA Cup, the League Cup and the then-Uefa Cup. But they could only manage a third-placed finish in the league, 11 points behind champions United.

Even doubles are difficult

A look at the record books shows that even winning two trophies, let alone three, is a rarely achieved feat.

City have become the first team to win the FA Cup and the Premier League in the same season since Chelsea did it in 2009-10 and they are only the eighth club to do so.

And their Carabao Cup triumph over Chelsea at Wembley in February means they become only the fourth club to hold the League Cup and the FA Cup simultaneously.

And there have been only 10 instances of a side winning the English top flight and the League Cup, emphasising the quality of City's run.

But what about in Europe?

Winning a hat-trick of trophies is almost as rare in the rest of Europe, though it has become marginally more frequent in recent years.

The side from the French capital picked up Ligue 1, the Coupe de France and the Coupe de la Ligue in each of those three campaigns, but they were not able to extend their domestic dominance into European competition.

In Germany, Bayern Munich secured their own domestic treble, consisting of the Bundesliga, the DFB-Pokal and the DFL-Ligapokal in 1999-2000, although the latter competition is now defunct.

And while it is not possible to win a domestic treble in Spain or Italy (nor Germany any longer), as there is no League Cup-style competition, there have been continental treble successes for both Barcelona and Inter Milan.

In 2008-09, Guardiola led Barcelona to a treble consisting of La Liga's title, the Copa del Rey and the Champions League, and the following season Jose Mourinho did the Italian equivalent with Inter. Prolific striker Samuel Eto'o featured for both sides.

Jupp Heynckes then completed the feat with Bayern Munich in 2012-13 as his all-star team finished 25 points clear of Jurgen Klopp's Borussia Dortmund in the Bundesliga and then beat them in the Champions League final, too.

Looking back further, Dutch giants Ajax, spearheaded by Johan Cruyff, won their own continental treble made up of the Eredivisie, the KNVB Cup and the European Cup in 1971-72.

Is this Guardiola's most successful year?

Guardiola ends 2018-19 with four trophies to his name: the Community Shield, the Premier League, the Carabao Cup and the FA Cup.

The last three of those came in 2019, marking a decent year's work for Guardiola.

But it is not the best year of his career, at least not in trophy terms.

And he nearly did it again two years later, winning five - but he missed the Copa del Rey off his list that time.

Nonetheless, Guardiola has now won six trophies at City, including the Community Shield, taking his total as a manager to 27.

Have City had it easy in the cups?

There's no doubt that City have been firing on all cylinders domestically this season but it's also fair to say they have had favourable routes in both of their cup runs.

In the Carabao Cup, they cruised past League One Oxford and Premier League strugglers Fulham without conceding in the first two rounds before advancing past a weakened Leicester side on penalties in the quarter-finals.

And their two-legged semi-final clash with Burton was very much over after the first-leg - City thumped the League One outfit 9-0 at Etihad Stadium before completing a 10-0 aggregate win with a 1-0 victory at the Pirelli Stadium.

In the FA Cup, they thrashed Rotherham, who were relegated from the Championship, 7-0 in the third round and thumped a much-changed Burnley 5-0 in the fourth round.

Then, Guardiola's side cruised past Newport County at Rodney Parade before they overturned a two-goal deficit to beat Championship side Swansea at the Liberty Stadium in the sixth round.

Their semi-final proved a slightly more difficult task, as they overcame a stubborn Brighton side at Wembley, although keeper Ederson was rarely troubled.

And they made light work of Watford in the final, too, as Raheem Sterling and Gabriel Jesus both scored twice in a fine 6-0 win as City became the first English top-flight side to register 50 wins in all competitions in a single season.