Steve Clarke says he wants to "emulate the success" of the Scotland women's team after being named the country's new head coach.

The 55-year-old replaces Alex McLeish on a three-year deal a day on from guiding Kilmarnock to third in the Scottish Premiership.

Scotland sit fifth in their Euro 2020 qualifying group after two games while Shelley Kerr's side are set for next month's Women's World Cup.

"I firmly believe we have a talented group of players who can achieve success on the international stage. I look forward to working with them and helping them to fulfil those ambitions.

"I appreciate the Scotland supporters have waited a long time for the national team to qualify for a major tournament. Now we have a Women's World Cup to look forward to in France this summer and it's my motivation to emulate the success of Shelley Kerr and her squad by leading us to Euro 2020.

"I believe we can qualify and look forward to that journey with the players and the fans, starting against Cyprus and Belgium next month."

Clarke, given a two-match ban by the Scottish FA on Thursday for criticising referee Steven McLean, starts with a home European qualifier against Cyprus on 8 June, with a visit to Group I leaders Belgium three days later.

Capped six times as a player, the former West Bromwich Albion and Reading manager had a year to go on his Rugby Park contract. His assistant Alex Dyer is staying at Killie.

Arriving in October 2017, Clarke steered Kilmarnock from second bottom of the Premiership to fifth place with a record points tally.

The Ayrshire side surpassed that total this year on their way to third in the top flight. He was this season's PFA Scotland and Scottish Football Writers' Association manager of the year.

"I am delighted that we now have the country's deserved manager of the year to lead the Scotland national team and his experience over the past two decades will be integral to rejuvenating our Euro 2020 qualifying campaign," said Scottish FA chief executive Ian Maxwell.

"It was important that we undertook the recruitment process diligently and respectfully, especially given the importance of the final games of the domestic season for Kilmarnock, Steve and his players."

McLeish was sacked in April two weeks after opening the Euro 2020 qualifying campaign with a 3-0 defeat in Kazakhstan, followed by an unconvincing win in San Marino. 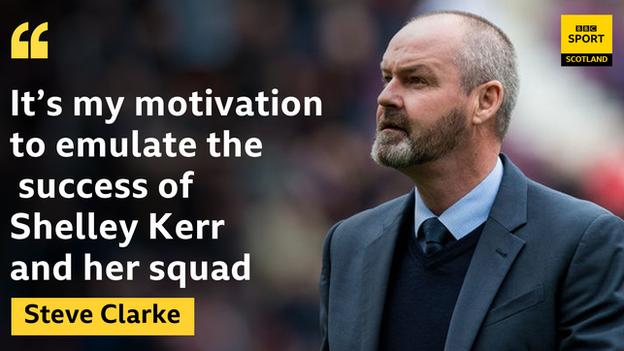 Scotland topped their Nations League section during the 14-month tenure of McLeish, which guarantees a play-off semi-final place if a top-two spot cannot be secured in qualifying.

Kilmarnock have confirmed their search for a new manager will start straight away, with director Billy Bowie paying tribute to Clarke and his legacy.

"While we're naturally disappointed to lose such a talented manager, I understand the lure of managing Scotland is a powerful one," he said.

"Steve leaves an incredible legacy, delivering our best campaign in over half a century and providing European football for the first time since 2001. His place in this club's illustrious history is assured and he will always be welcomed back to Rugby Park with open arms."