It will "take a long time" for Manchester United to challenge for the Premier League title again, says manager Ole Gunnar Solskjaer.

United ended their season with a dismal 2-0 home defeat against relegated Cardiff to finish sixth, 32 points behind champions Manchester City.

The Red Devils won just one of their last seven league games.

"The last couple of months have been extremely hard for the team, the club and for the players," said Solskjaer.

United finished second under Jose Mourinho last season, but the Portuguese was sacked in December following a run of poor results.

The Old Trafford club's legendary former striker Solskjaer was appointed on an interim basis, taking the the club on a run of 12 games without defeat, but they collapsed in the final few months to finish five points off a Champions League place.

They last won the title in 2012-13, in Sir Alex Ferguson's last season in charge, while it is now two seasons without a trophy after the Europa League and League Cup triumphs in 2016-17.

Solskjaer told BBC Radio 5 Live: "More or less the only positive from today is that the season is over. We meet again on 1 July and we will work back to where we belong.

"To reach the leaders it will take a long time. For ourselves, the short-term focus in the league will be getting into the top four.

"We have got the Europa League, FA Cup, Carabao Cup to go for a trophy because Manchester United can't go many years without winning a trophy. Jose [Mourinho] won the Europa League last and that is a realistic ambition.

"In the league, the points we are behind the top two, they have been excellent, those two. Absolutely exceptional. And we are five or six points behind Arsenal, Tottenham, Chelsea. They are the ones we have to make sure we catch up and don't let anyone closer to us."

Speculation continues over the futures of several big-name players at United, mainly midfielder Paul Pogba, who has been linked with a move to Real Madrid.

In videos on social media, the French World Cup winner received abuse from his own supporters while performing the end-of-season lap of honour.

Club captain Antonio Valencia and midfielder Ander Herrera will leave, while Juan Mata's contract runs out at the end of the season and Alexis Sanchez could also move on.

Against Cardiff, Solskjaer gave a full start to academy product Mason Greenwood at the age of 17.

"We will need players in," said Solskjaer. "We will need some characters in but, of course, you see Mason [Greenwood] today, he is made for Manchester United and a player we will see a lot of."

'I was always a professional in all aspects' - Sanchez 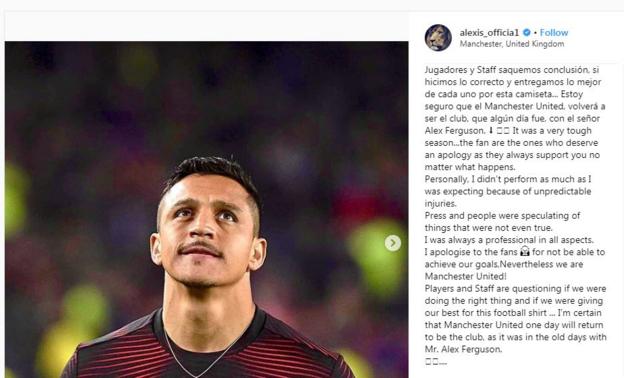 Meanwhile, forward Alexis Sanchez took to social media to "apologise" on behalf of the team and defended himself against accusations against his own commitment to the cause.

The Chilean, who only managed 27 appearances this season, said: "Personally, I didn't perform as much as I was expecting because of unpredictable injuries.

"Press and people were speculating of things that were not even true. I was always a professional in all aspects.

"I apologise to the fans for not be able to achieve our goals, nevertheless we are Manchester United!

"Players and staff are questioning if we were doing the right thing and if we were giving our best for this football shirt... I'm certain that Manchester United one day will return to be the club, as it was in the old days with Mr Alex Ferguson."