Manchester City claimed their second successive Premier League title with a thumping 4-1 win at Brighton with Liverpool finishing a point behind in second after a 2-0 win over Wolves.

Chelsea and Tottenham did just enough in recent weeks to take the other two Champions League spots as the challenges of Arsenal and Manchester United faded.

At the other end of the table we bid farewell to Cardiff, Fulham and Huddersfield.

Here's my team of the season - have a read and select your own below. 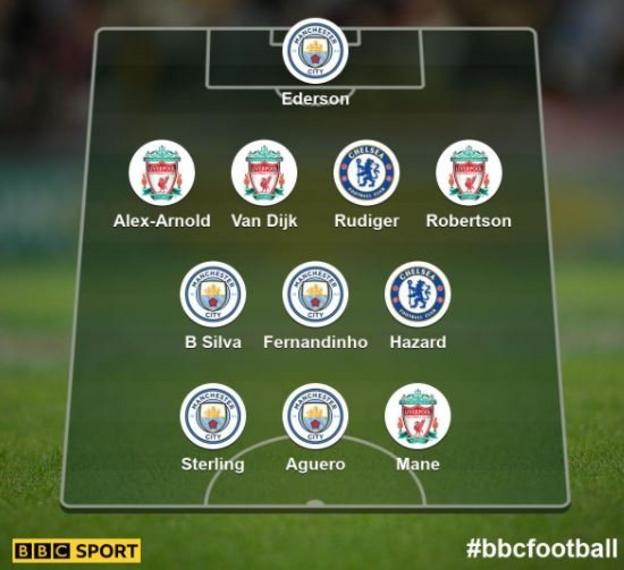 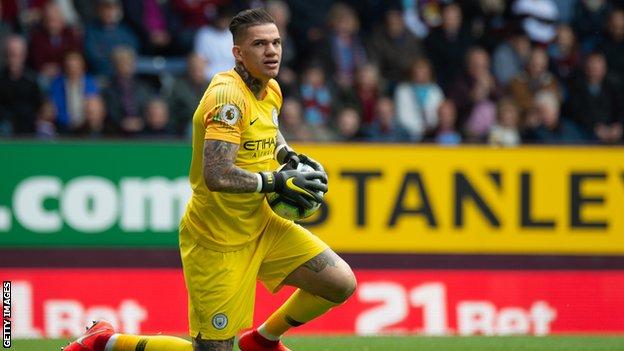 Ederson: From the moment Ederson arrived at Manchester City it was obvious that Pep Guardiola wanted a goalkeeper who was comfortable with the ball at his feet as well as his hands.

Ederson's performances this season have been courageous, consistent and, on occasion, downright brilliant. His greatest strength is his composure under pressure. A goalkeeper who can start and end attacks with tremendous skill.

Did you know? Ederson kept 20 clean sheets in the Premier League this season - the most by a City goalkeeper in a single campaign in the competition. 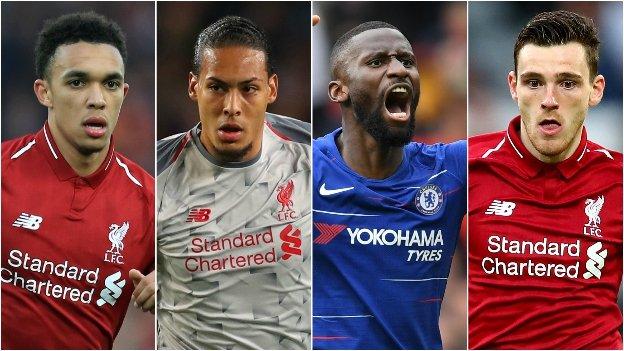 This lad has grown in stature and confidence at an alarming rate. However nothing prepared me for the incredible initiative he showed when he spotted Barcelona napping in their own 18-yard box before presenting Divock Origi with the chance to score Liverpool's fourth goal in their Champions League semi-final win.

At this rate he could be an England regular in a year and world-class in two.

Did you know? Alexander-Arnold provided 12 assists for Liverpool in the Premier League this season - the most by a defender in a single campaign in the competition's history.

Virgil van Dijk: I have almost run out of superlatives to describe Virgil van Dijk's performances this season - he has featured in my team of the week more than any other player.

What the Dutch international has brought to Liverpool's defence is almost unquantifiable. I do feel however, that if Liverpool fail to win the Champions League, and that is by no means certain, it may hasten Van Dijk's departure. Players of his class need to be playing for the best team in the world.

Antonio Rudiger: It's very unfortunate that an injury to Antonio Rudiger will rob him of an appearance in this season's Europa League final. His absence is a big deal for Chelsea and might be the difference between them winning and losing against Arsenal.

His performances have been outstanding during a difficult period for the Blues. Every time I watch this lad play I am bowled over by his enthusiasm and competitive nature. A man for a crisis.

Did you know? Rudiger had the best passing accuracy (minimum 500 passes) of any Chelsea defender in the league this season (91.5%).

Andrew Robertson: Full-backs who have the ability to produce wonderful crosses into the opposition's penalty area and then defend as though their life depends on it are worth their weight in gold.

Andrew Robertson has been doing that better than any other full-back in the country this season. He also possesses a terrific change of pace which enables him to recover situations when others are left for dead. This young man could get into any international team in the world right now. Scotland are desperately lucky to have him.

Did you know? Robertson created more chances from open play than any other Premier League defender this season (47). 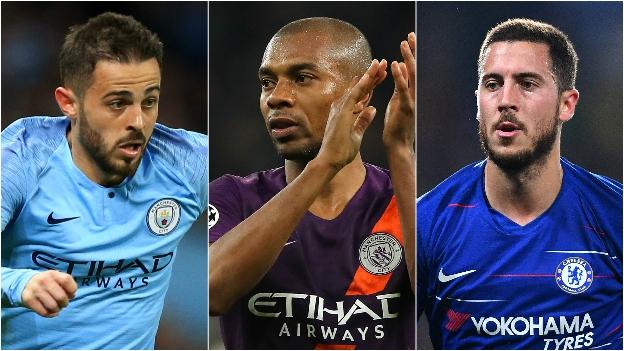 Bernardo Silva: The departure of Yaya Toure and injuries to Kevin de Bruyne have created a space for someone else to shine and that person has been Bernardo Silva.

The Portugal international has been an inspiration for Manchester City this season while never insisting on hogging the limelight when City have a full complement of players available.

It takes a special individual who is prepared to fit in regardless of the cost to his own performance. That makes him a real star in my book.

Did you know? Against Liverpool in January, Silva covered 13.71km which was more than any other player in a single Premier League game this season.

Fernandinho: Whenever Manchester City have been in trouble this season more often than not it has been Fernandinho who has bailed them out.

This is one of the Brazilian footballers I have seen adapt to the English game better than any other. This man plays his football and approaches the industry as if he were born in Wallsend or Kirkby. Compliments in English football don't come much bigger than that.

Did you know? The Brazilian made more tackles (57) and interceptions (41) than any other City player in the Premier League this season.

Eden Hazard: Without Eden Hazard Chelsea's season would have fallen apart. With the Belgium wizard in their side they not only remained relevant in the Premier League title race but in contention for a European trophy.

His conduct amid some challenging moments at the club has been exemplary. If the rumours are true and the player is heading for Real Madrid, then Chelsea must give him a dignified exist. He's certainly earned it.

Did you know? The Belgian was involved in more goals than any other player in the Premier League this season (31 - 16 goals and 15 assists). 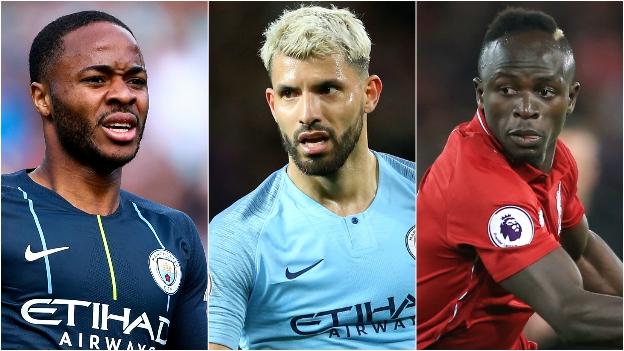 Raheem Sterling: I've seen this lad develop from a talented player at Liverpool into a superstar at Manchester City. What has impressed me most about this footballer is the way he has slowly convinced his critics he is more than just an excellent footballer, but a player with courage and conviction.

Sterling was and has never been anything other than a wonderful professional who conducts himself with grace. Professional Footballers' Association Young Player of the Year and Football Writers Footballer of the Year, we salute you.

Read more about what I think of Sterling's convictions in The Crooks of the Matter below.

Did you know? Sterling was involved in more Premier League goals than any other English player this season (17 goals and 10 assists).

Sergio Aguero: Regular readers of my team of the week will know how highly I rate Sergio Aguero. As far as strikers go they don't come much better.

His goalscoring record at Manchester City is unsurpassed by any other mortal at the club. Whenever Aguero has been at his best City have either won a title or a trophy. This season they've won both and are now on the verge of an extraordinary treble.

Did you know? Aguero has scored 32 goals in all competitions for Man City this season - only in 2016-17 (33) has he scored more in a single campaign for the Citizens.

Sadio Mane: This has not been an easy season for Liverpool because Roberto Firmino and Mohamed Salah have either been injured or off the boil. Enter Sadio Mane. The Senegal striker has held the fort during his team-mates' difficulties and kept them in contention.

If Liverpool win the Champions League final, and that is by no means a foregone conclusion, then Mane will have played a massive part in their success. Van Dijk may be the Professional Footballers' Association Player of the Year but for me Mane is Liverpool's player of the season.

Did you know? Mane scored 18 home Premier League goals for Liverpool in 2018-19 - the most by any player, and eight more than Huddersfield Town scored in total in their home games this season.

You've seen my selections this season. But who would you go for?

My PL team of the season

Pick your Premier League team of the season and share with your friends.

Last week, I told you the game was at its unpredictable best and English clubs were on the verge of making European history by reaching both the Champions League and Europa League finals. Well they have.

I write this Crooks of the Matter column of the season from the Amex Stadium where I expected Manchester City to lift the Premier League title - and they did.

I also wanted a chance to say thank you to Vincent Kompany for his marvellous years of service to the game and to congratulate Raheem Sterling on his personal achievements and the way he has conducted himself.

He comes from a long line of distinguished black players with Afro-Caribbean heritage but his standout quality is in his courage to call out racism whenever confronted by it. He hasn't taken the easy route and waited for his career to end but he has attacked the issue head-on while still playing.

I cannot predict the outcome of either of the European finals but what I have learned is that in football you cannot take anything for granted. That is a lesson some of those outstanding young Ajax players will never forget and one Barcelona's Lionel Messi and Luis Suarez should have known better.