The battle for the title has gone to the final day seven times in the Premier League era but, the Aguerooooooo season aside, few have been as compelling as the one between Manchester City and Liverpool this year.

Liverpool were even top for 21 minutes on a nervy final day. So just how close did the Reds come to winning their first title in 29 years?

Depending on how you look at it, the fine margin between success and failure, becoming heroes or remaining nearly men, was just the width of a paracetamol...

Nine grains of sand away from the title?

All credit to BBC Sport reader Dan Middlehurst, who tweeted back in January: "I've got a sneaky suspicion that the John Stones clearance might be one of the defining moments of the season."

How right he was.

Liverpool came to Etihad Stadium on 3 January with a seven-point cushion at the top of the Premier League. Jurgen Klopp's side were unbeaten and knew that a win would put the defending champions 10 points behind them and potentially out of sight.

After 18 minutes, with the score locked at 0-0, Sadio Mane poked a shot past Manchester City goalkeeper Ederson that hit the post, only for Stones' attempted clearance to rebound off the keeper and come agonisingly close to crossing the line, before the defender hooked it away.

It was a moment Stones would describe as "something special" as he celebrated on the pitch at Brighton after the final-day victory that clinched the title by a single point.

So how close was it? Goalline technology showed the ball was 11.7mm away from crossing the line. Or about the width of a headache tablet. Or nine grains of sand... 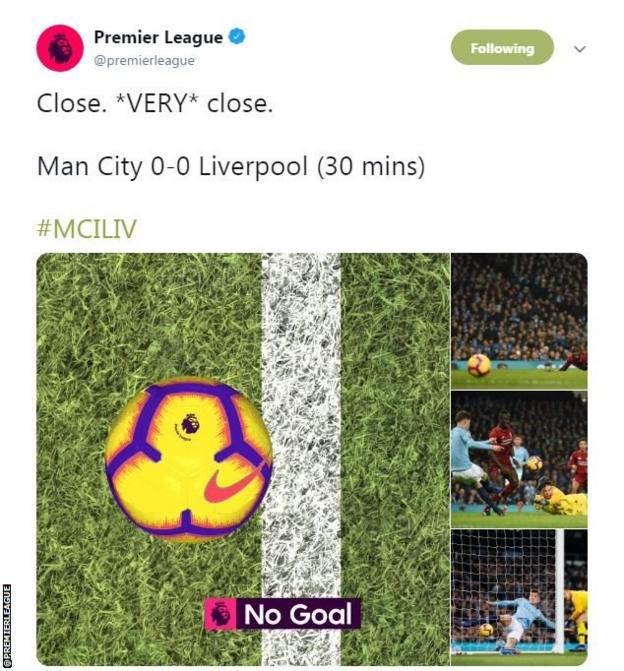 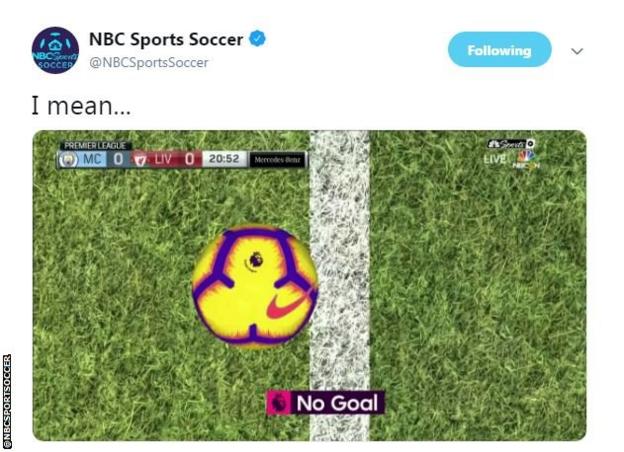 Ifs, buts, and maybes. But had Liverpool taken the lead would they have gone on to win? Ten points is an awful lot to make up in the remaining 17 games of the season.

As it was, goals from Sergio Aguero and Leroy Sane gave City the win and inflicted Liverpool's only defeat of the whole campaign.

Fast forward a few months and Pep Guardiola's side were grateful for another bit of sharp work from the goalline technology cameras.

With Liverpool on top of the league again, City were being held to a frustrating draw at Burnley when Aguero squeezed off a shot in the 63rd minute.

Clarets defender Matthew Lowton blocked it on his chest and hoofed it away. But it was over the line. By 29.51mm this time. A comparative chasm. But still only half as long as a golf tee. We're talking 2% of Danny DeVito.

Would an assistant referee have given it? Maybe not. But that's what technology is for, right?

In a title race so tight and so intense, the two head-to-head games were always going to be massively significant. City may have landed a crucial blow with that win in Manchester in January, but they missed a chance in October that would have helped them out even more.

Champions City had not won a league game at Anfield in 15 years. They had a great chance to end that run but Riyad Mahrez fired an 85th-minute penalty high over the bar. The game ended 0-0.

Why was Mahrez taking it? The £60m summer signing had missed three of his previous five penalties and unsurprisingly hasn't taken one since.

Liverpool had a few helping hands on the way, certainly from opposing goalkeepers.

Everton and England number one Jordan Pickford served up a howler in the Merseyside derby back in December, inexplicably shelling a hopeful punt on goal by Virgil van Dijk and allowing Divock Origi to head in.

A month later and Julian Speroni caught the bug, or rather failed to catch it, juggling a routine cross from James Milner back over his own head to gift Mohamed Salah a tap-in. A needed tap-in too, as Liverpool scraped a 4-3 win.

Fulham's Sergio Rico got in on the act in March, dropping a Salah effort at the feet of Sadio Mane and then hauling the Senegal striker over for a penalty just when it looked like a costly draw was on the cards. Milner converted from the spot to give the Reds another win.

Lose one game and lose the title?!

Liverpool fans, players, and management have a right to feel cheesed off.

No team had finished as Premier League runners-up with more than 89 points before now. In the top five European leagues, the runners-up to finish with the most points were Real Madrid in the 2009-10 La Liga season (96 points), an unwanted record Liverpool can now claim as their own.

When Arsenal's 'Invincibles' went unbeaten en route to the title in 2003-04 they picked up 90 points, while only one other side has gone through a whole season losing just once - Jose Mourinho's Chelsea team who were champions in 2004-05.

Sanchez instead of Silva?

And a final thought.

Bernardo Silva's performance in the game between the title rivals in January was one of the standout individual displays of the season - former England winger Chris Waddle told BBC Radio 5 Live that night that he "was everywhere and kept dragging the team forward".

Silva and fellow forward Raheem Sterling both made it on to the six-man shortlist for the Professional Footballers' Association Player of the Year award, while along with Aguero and Sane they have formed a devastating attacking line-up.

Yet it could all have been very different.

In January 2018, Manchester City and Manchester United were involved in a transfer tug-of-war over Arsenal's Alexis Sanchez.

The Chile striker eventually moved to Old Trafford, after City pulled out of a deal over fears his wage demands might affect team spirit.

Since then Sanchez has scored five goals in all competitions for United, while City's forwards have thrived. Eight City players have scored more this season than Sanchez has managed in 16 months at Old Trafford.

How much less game time would they have got if Sanchez had moved to Etihad Stadium? We will never know - but perhaps that decision not to sign a player was just as important as the ones to sign the likes of Silva, Sterling and Sane in the first place.