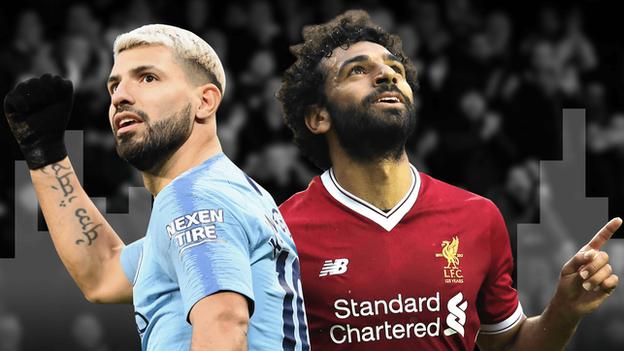 Manchester City have sealed the Premier League title, needing a 14-game winning run to keep themselves above Liverpool - the best second-placed team in English top-flight history.

It felt like an absolutely relentless battle between two great Premier League sides. But do the stats back that up?

The best top two ever

It has been a title race of unparalleled quality and the numbers bear that out.

This is the form guide for the second half of the season:

The top two have amassed 195 points - a top-flight record for the champions and runners-up. They actually passed the previous Premier League record in their 36th games of the season. They also recorded the most combined wins (62) for a top two.

In both those instances, the previous record was last season, although City had provided a much greater share of the combined figures than second-placed Manchester United.

City and Liverpool have also broken the record for the fewest combined defeats - five. The top two in 2004-05 (Chelsea and Arsenal) and 2008-09 (Manchester United and Liverpool) had six defeats between them.

All season the title race has seemed too close to call, not least because the lead at the top has changed so many times.

In fact, it has never changed hands so many times in a season.

By the time the title was won, it had switched 32 times at the end of a day this season, although plenty of those came as a result of staggering City's and Liverpool's games.

The previous record had been 2001-02, when the lead changed 28 times. Arsenal won the title that season, but both Manchester United and Liverpool had led in the final 10 games - and Newcastle and Leeds were both top over the festive period.

Liverpool have spent 141 days top of the Premier League - 16 more than Manchester City. Chelsea spent nine days top - and Manchester United were top for one day, beating Leicester 2-1 in the first game of the season.

The last time Liverpool spent more days on top in a season was 1990-91 (163 days), when they also finished second. They are far away from the Premier League record for a team spending the most time top without winning the league though - Newcastle United's 212 days in 1995-96 may never be surpassed.

City's points haul in itself was not record breaking - mostly because of their 100-point tally in 2017-18. But they have broken plenty of other records.

Only five top-flight title-winning teams have ever won 30 games in a season, including football before the Premier League and 42-game seasons. City's record 32 wins last season put them on the list, and this season's vintage are on it again with the same figure.

City have also scored more goals than any English top-flight team in a season. They have managed 163 in all competitions. They also had the previous record, 156 in 2013-14. In fact City have three of the top five scoring seasons, with 143 in 2017-18.

So near, yet so far for Liverpool.

The Reds have the highest points tally of any team to finish second in the English top flight. Their 97 beat the previous record of Leeds United in 1970-71 (91) - adjusted to three points for a win. The previous highest Premier League total which failed to secure the title came when Manchester United finished behind Manchester City on goal difference with 89 points in 2012.

Liverpool's 97 points would have won them every single Premier League title apart from last season and this season.

They are one of only 10 teams in the Premier League era to pick up 90 or more points. Unfortunately for them City this season are one of the others.

Liverpool have won 18 English titles, but only once have they ever picked up more points than they did this season - 98 in 1978-79, adjusted to three points for a win. And that was from 42 games, making this Liverpool's best-ever points per game return.

In fact, the Reds have the highest tally of a runner-up in any of Europe's top five leagues - eclipsing Real Madrid's 96 in 2009-10. The champions that season? Guardiola's Barcelona.

For two such attacking sides, it is only right that players from both teams recorded historic goalscoring feats this season.

City's Sergio Aguero, with 21 goals, became only the second player to score 20 or more Premier League goals in six different seasons. Alan Shearer managed it in seven - three for Blackburn and four times for Newcastle.

Liverpool pair Mohamed Salah and Sadio Mane have also hit at least 20 league goals. That is only the fourth time two players in the same team have reached that landmark in a Premier League season.

They shared this season's Golden Boot with Arsenal's Pierre-Emerick Aubameyang on 22 goals.