It all started with a fancy-dress night.

In 2006, Doug Bierton was a business management student at the University of Manchester who wanted to go to a fancy dress party as Paul Gascoigne. In a charity shop in Withington, he found an England Italia 90 away shirt for £5, and had the basis of his outfit.

Short of money, he put the shirt on eBay a couple of days later and was surprised to see it sell for £50.

He calls it the lightbulb moment.

On Doug's course was Matt Dale, who also loved football and had dreamed of buying and selling shirts to build a collection. The two of them met and spoke about their shared passion. Neither was particularly enamoured with entering the corporate world, and so explored the prospect of joining forces. An idea was born. So too was Classic Football Shirts (CFS).

The pair had a friend who hastily made them a website, and by the time they graduated later that year they were stockpiling football shirts in their student house in Fallowfield.

Every spare minute and penny was spent scouring online for shirts available at knockdown prices that could be sold with the sole intention of buying more.

"Everyone else had the Manchester United home shirt, but my brother would have the third shirt from some weird and wonderful foreign team. You could find those shirts in the back of magazines, but not if you were going shopping with your mum and dad. That's where the curiosity stemmed from.

"The first few months were pretty terrible. I remember going to watch Liverpool play Manchester United at Old Trafford and went to their house before the game. At 15, I remember having more money than them.

"They were almost malnourished, eating basic food, because everything was spent on shirts. There were no sales, no money, a grey Manchester sky and them just buried away in this student house.

"But they were so resolute. In any normal company, you have to satisfy other people's terms. This was just two people doing something they love, on their terms, with the excitement of handling football shirts.

"They sat in the living room all day on laptops searching, buying and selling. We would go on nights out, come back at 3am, pick the laptop up and start working." 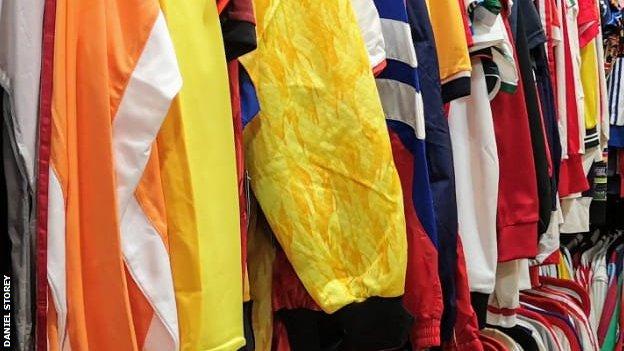 One weekend, everything changed. Matt and Doug had found a collector willing to sell his complete collection of Manchester United kits from the 1980s to the present season, and paid for it with a single match-worn Mark Hughes shirt they also found online. From then on, the collection only grew in value.

Gary is more than happy to admit that their timing was incredibly fortuitous.

In 2006, e-commerce was becoming dominant but there was no obvious outlet for vintage football shirts. Football's commercialisation had led to an explosion of kit sponsorship deals and Premier League clubs were starting to release three new kits every year.

With the designs and fabrics only getting more formulaic, a nostalgic appetite for older, more individual styles grew.

Nostalgia often works in 20-year hindsight. In 2006, that meant World Cup 86 leading to Euro 88 leading to Italia 90, football Enlightenment. Ask any collector for their top five, and almost all will include a shirt from that period.

But it goes beyond pure nostalgia. To those who adore and obsess over them, football shirts provide a connection to their club that has been lost somewhere along the way as the football experience, particularly at the top level, has become increasingly homogenised.

"I think every football fan has that moment that sealed the deal for them," Gary says. "The moment or match that turned football from something you followed to something you obsessed over. That works for every team and every supporter.

"And typically, people prefer nostalgia over what's happening currently; some vague idea that things were better before.

"The shirt is the link to that. You see the shirt, you remember the moment. It gives you a brief second of the initial rush all over again. We've had grown men walk into the big stock room and burst into tears because it takes them to a special place." 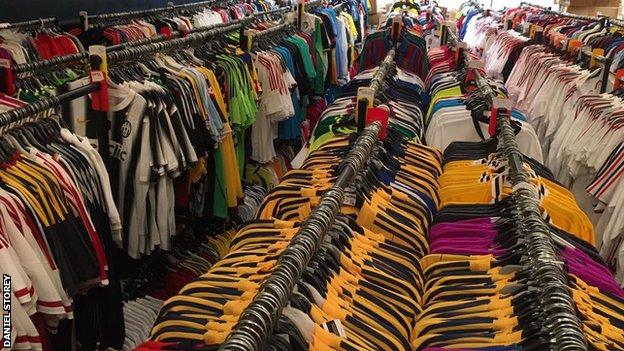 If this astonishing collection has formed through a series of fortunate, bizarre twists of fate, the most memorable came through an Italian named Ettore.

He was a kit obsessive who had longed to help the team and so rang around Italian football clubs and shops in the hope of finding available stock. Ettore learned that AC Milan had a huge amount of old kit that they were prepared to part with.

"Nothing prepared us for what we found in Milan," Gary says. "You learn that they have this stuff, but cannot imagine it.

"It was almost too much, like the world had become a simulation. There were Beckham's personalised pants sat next to Andriy Shevchenko's Champions League final shirt.

"On that day, with the realisation that every club might have a similar situation, we knew that things were going to get much bigger - and quickly."

Walking into the warehouse literally takes my breath away; the sheer breadth and volume of the collection is truly unique. CFS have 25,000 vintage shirts listed on their website, plus 9,000 lines of clearance stock. Their match-worn player collection adds another 15,000 shirts.

In total, the estimation - and there is no exact figure - stands at around 75,000 individual products that totals more than a million units of stock. This is no Aladdin's cave; it's Aladdin's mansion.

If CFS's website allows them to buy and sell shirts, this is about far more than that. The aim is to build up their extensive collection of items that will never be sold, simultaneously creating the largest archive of rare football shirts in the world in order to preserve and exhibit a part of football's culture that might otherwise be spread across thousands of individual collectors. There is talk of a museum. I ask the obvious question: which items make them most proud?

"The holy grail is Argentina's away shirt from 1986," Gary says. "About a year ago we got one of the substitute's shirts from the quarter-final against England. Argentina didn't have an away kit that they liked, so they went to a local sports shop in Mexico which was selling Le Coq Sportif teamwear that was basically PE kit for school.

"To think that you've got the team that won the World Cup wearing a kit that they got from a Mexican sports shop is incredible. That's not about financial value, it's about how much it means and about the sheer rarity of it. It shouldn't even exist.

"We also recently got Cristiano Ronaldo's Sporting shirt from the second half against Manchester United in a friendly match; they signed him immediately afterwards. Sporting wore their home shirt in the first half, but this special gold shirt after the break. That's actually the last shirt he ever wore before going to United. That's a keeper."

CFS have been able to increase their match-worn collection through forging relationships with former players and the PFA. Some retired footballers might wish to keep all of their shirts and those swapped with opponents, but most prefer to keep hold of a few particular items - debut shirt, high-profile opponent, memorable matches.

Via this route, they have acquired pieces that they could never have dreamed of, including suit jackets with tactical formations, dry cleaning tickets and even love letters still in the pockets. But the tale of their first footballer collection is the most remarkable.

"We saw a guy selling United States shirts from the 80s and 90s on eBay," Gary recalls. "We contacted him and he knew nothing about football, but had bought a storage lot that had unpaid rent at blind auction.

"The storage lot had belonged to a guy called Des Armstrong, who won 81 caps for the United States. It had shirts, but also photographs from pitchside at Italia 90 and all sorts of personal memorabilia.

"So we bought it all and then contacted Des. He had no problem with us having the shirts, but was incredibly grateful that we could gift him back his memorabilia. Things like that will stick with you forever."

Speaking to Gary, one thing is obvious: none of this would be possible without their love and obsession for what they do. From watching old Champions League matches in damp student houses to making videos about their shirts with Gareth Bale and Gary Lineker, it is an incredible journey, but this is still just a group of friends who react like children at Christmas when a new source of potential items is identified and explored.

Anyone who collects anything, from porcelain dogs to stamps to autographs, knows that rush. And it never goes away.

"It feels brand new because every day you are constantly discovering new things," says Gary. "We are always on the hunt.

"In 20 years, we'll probably all be married and divorced because we think about football shirts too much. It's a hobby that has gone out of control and turned into an obsession. And there's one conclusion that dawned on us a long time ago: We are completists in an area where 100% doesn't exist."