Dutch duo Virgil van Dijk and Vivianne Miedema have won the Professional Footballers' Association Player of the Year awards for 2018-19.

Van Dijk succeeds Liverpool team-mate Mohamed Salah, who won in 2017-18, and is the first defender to take the award since Chelsea centre-back John Terry in 2004-05.

The rock at the heart of Liverpool's title challenge

Van Dijk has been one of the key players in Liverpool's ongoing title challenge this season, playing in every one of their Premier League fixtures.

Signed in January 2018 from Southampton for a world record fee for a defender of £75m, the Netherlands international has been a rock at the heart of the Reds' defence.

Liverpool have kept 19 clean sheets from their 36 league games this season, 28 of which they have won.

He has also contributed three goals and two assists during the campaign.

"It's the highest honour you can get as a player to get voted player of the year by the players you play against every week," said Van Dijk.

"It's special. I'm very proud and honoured to receive it."

Van Dijk could still end the season with a Premier League winner's medal with Liverpool trailing Manchester City by a single point with two matches remaining.

Chelsea playmaker Hazard, who won in 2014-15, was nominated alongside the City trio of Aguero, Silva and Sterling, and Van Dijk's Liverpool team-mate Mane.

Netherlands international Miedema is the top scorer in the WSL this season, netting 22 goals and providing 10 assists in her 19 appearances.

In all competitions this season, the prolific striker has scored 39 goals in 46 appearances.

The former Bayern Munich player hit the opener as Arsenal secured the WSL title with a 4-0 win at Brighton's Amex Stadium, in front of a new league-record crowd.

"I'm obviously really proud to represent my team here, we've had an amazing year, especially with winning the league," she said.

"I'm just really happy I could help my team all season long with scoring goals and it means a lot."

Miedema, who was also nominated for the women's young player award, is the first Arsenal player to win the senior prize since team-mate Kim Little claimed the inaugural award in 2013.

This summer, she will hope to propel the Dutch to success at the Women's World Cup in France, as they look to build on their triumph at Euro 2017.

Miedema was the only Arsenal player nominated, seeing off City trio Houghton, Parris and Walsh and Chelsea pair Cuthbert and Ji.

Many believed it was a two-horse race between Van Dijk and Sterling for the men's Player of the Year award.

He succeeds City team-mate Leroy Sane in winning the award.

He could end the season with a domestic treble of winner's medals, having already won the Carabao Cup with City, who lead the title race and face Watford in the FA Cup final on 18 May.

Sterling has also received recognition for his stance against racism in football this season, having criticised newspapers' portrayal of black players and calling for stronger punishments for supporters who racially abuse players. Van Dijk was also the pick of both the BBC Sport readers and pundits for player of the year.

The Dutchman received 56% of votes by BBC Sport readers, with Sterling in second place on 26%.

Tottenham forward Son Heung-min, who was not shortlisted for the PFA award, got 6% of votes in third.

Van Dijk and Sterling were their two outstanding candidates, with the former earning 14 votes to the latter's seven.

Both were selected in a PFA Premier League team of the year dominated by Liverpool and Manchester City players.

The only non-Liverpool or City player in the side is Manchester United midfielder Paul Pogba - a selection that has been met with some criticism.

City women pick up other awards

Women's Young Player of the Year Stanway has scored 11 goals in the WSL this season.

She has the chance to win two domestic trophies this season, with City facing West Ham in the FA Cup final at Wembley on Saturday, having won the League Cup in February.

Special Achievement award winner Houghton, 31, is set to lead the Lionnesses at this summer's World Cup in France, having won 104 caps for her country to date.

Houghton has said she would give up her World Cup place to care for him if necessary, although he has said he will not let her do that, while England boss Phil Neville has praised her response to the news.

Houghton was also named in in the PFA's Women's Super League Team of the Year alongside City team-mates Parris and Demi Stokes.

Baggaley and Birmingham City defender Aoife Mannion make up the 11. 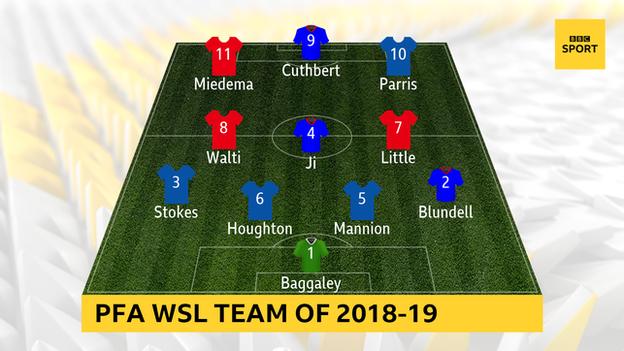