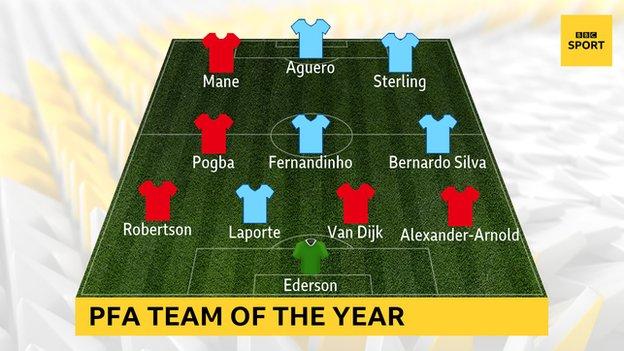 Six Manchester City players and four from Liverpool make the PFA Team of the Year - but it is the inclusion of the remaining player that has been the most notable selection.

Despite an inconsistent season, Manchester United midfielder Paul Pogba finds himself in the 11, the only player in the side not from the Premier League's top two clubs.

The team was voted for by his fellow professionals, but should Pogba be in the team? And if not, who should be in it instead?

You can watch the full debate on The Premier League Show on Thursday at 19:00 BST.

Pogba 'does not deserve' to be in

France World Cup winner Pogba's 13 goals and nine assists so far this season put him in the top 10 for both categories - but none of the four pundits included him in their teams.

Lineker: Pogba is a beautiful footballer, there is no question about that and has lots of qualities. In certain performances this season for Manchester United he has been exceptional. I don't think he deserves to be in the team of the year because his form has been erratic, certainly in the Mourinho part of the season. He has not been consistent enough.

Shearer: I am really surprised other players think he has been so consistent that a lot of them have decided to put him in their team. You should respect him for what he has done in the game but he has not been as consistent as he should be.

Hasselbaink: Pogba's individual ability is magnificent but I don't think he should be even close to this team.

Reddy: He is supremely talented but nowhere near consistent enough. He is not reliable enough and not the reference point for his team. When you are that gifted, you should be and everyone should be looking at him as the leader. Perhaps the name helps.

Who should have been in instead? 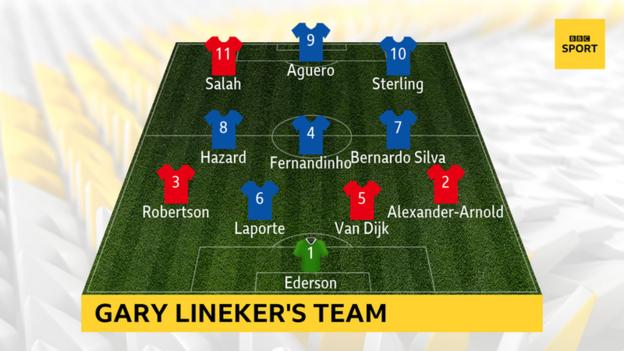 Chelsea are challenging for a top-four place but may not have been there without the contributions of Eden Hazard, who has scored 16 goals and provided 13 assists. All four pundits selected Hazard in their teams.

Midfielder Georginio Wijnaldum has been instrumental in Liverpool's quest for a first league title in 29 years, while Declan Rice's performances for West Ham have earned him a call-up to the England national team.

Lineker: When you judge players and how good they are, the element of joy they bring to the game is very important. Hazard is probably the closest to Lionel Messi in style - low to the ground, strong, with an electric burst of pace - and I love watching him play.

Shearer: Wijnaldum is Mr Consistent. I don't think Liverpool would be where they are without his performances. He offers solidity and is a leader in that midfield. Not many people mention him compared to the others, but he has been a regular 8/10 each week.

Hasselbaink: This boy Rice has caught my eye. I saw him play and followed him, he left Chelsea to join West Ham and they have nurtured him. He is 20 but plays so maturely and in an important position where you have to be unselfish. What I have noticed is he does it simply, getting the ball and playing it. He has a pass accuracy of around 80%. He has been very consistent and against Manchester United at Old Trafford, he played a magnificent game and was above everyone else.

Reddy: Chelsea would not be anywhere near the conversation for a Champions League place without Hazard. When you speak to players who have played against him, they say he is unplayable. He is so quick in his mind so is three steps ahead of you. He is so strong so it is difficult to get the ball off him. You have to have multiple players defending against him and a gameplan to stop service to him.

The two they could not leave out... 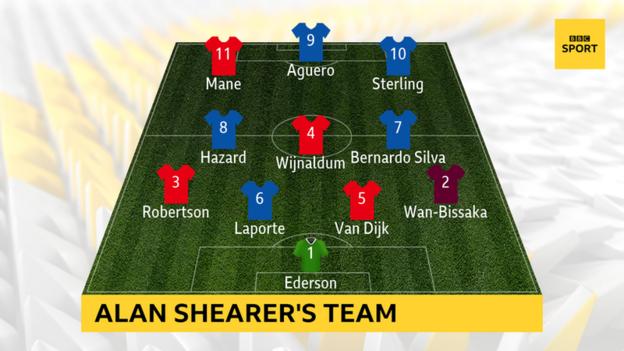 Liverpool defender Virgil van Dijk plugged the gap in defence that the Reds required for a concerted title challenge, while Raheem Sterling has scored 17 goals and provided 10 assists as both players vie for the main PFA Player of the Year award.

Lineker: What Sterling has done post World Cup is nothing short of remarkable. Looking at Manchester City and the plethora of talent in the squad, Pep Guardiola rotates them but Sterling is the 'go to' player. He has become a real role model for football in this country.

Shearer: Sterling's improvement in goals and assists is superb. His finishing is massively better and his positioning on the pitch and scoring vital goals is incredible.

Hasselbaink: Van Dijk has been the Rolls Royce of defending. I look at which striker has given defenders the runaround - not a single one has been able to do so against Van Dijk. He has been exceptional.

Reddy: When Liverpool signed Van Dijk, they called him a transformer. They felt £75m, a world- record fee for a defender, would be a bargain. They wanted a centre-back that was good in big spaces and aerially dominant. He needed to fit into Jurgen Klopp's blueprint of being very assertive and aggressive while in possession. When the club missed out on Van Dijk in the summer, there was so much pressure to get someone else but they did not deviate from their plan and he completely changed Liverpool. 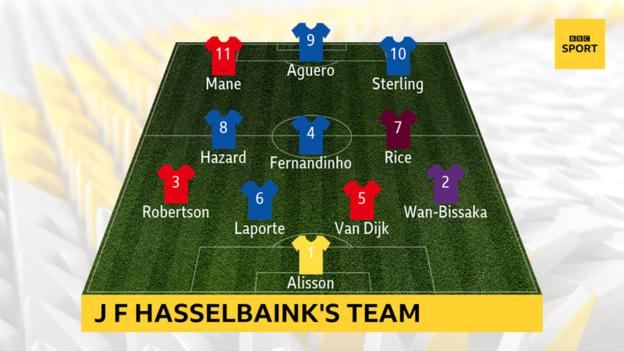 The pundits were split in the goalkeeper category, with Manchester City's Ederson and Liverpool's Alisson the two clear options.

Lineker: It is easy to make a great case for both Ederson and Alisson, there is not a lot in it. They are vying for the top spot for Brazil too. Alisson has been helped by a stern Liverpool defence and both can play football but Ederson gets the nod because he could probably play in midfield for Manchester City and has been consistent - he has made fewer errors than Alisson.

Shearer: For the goalkeeping position, my mind was 50/50 up until last weekend when Ederson made four one-on-one saves in their 1-0 win over Tottenham and it tipped it in his favour. Both he and Alisson have made a huge difference and added something else to their teams.

Hasselbaink: Alisson has made such a big difference to Liverpool compared to last year. I appreciate how he has come in and how he has changed the backline and the confidence he has given to the Liverpool fans and the defence. He has made the big saves in the big moments. They have only conceded 20 goals so far this season. He is not as good with the ball at this feet as Ederson, but I like a goalkeeper to be a goalkeeper - make saves and catch balls. Alisson does that.

Reddy: When he walked in, the players stopped and marvelled at him. In the tunnel, there is a sense of 'that is our goalkeeper' and psychologically that has had an impact. His playing style allows Liverpool to win in a variety of ways, which is something they have not done before. They can rely on a steely foundation. Ederson is exceptional, but I do not think he has had an impact like Alisson. 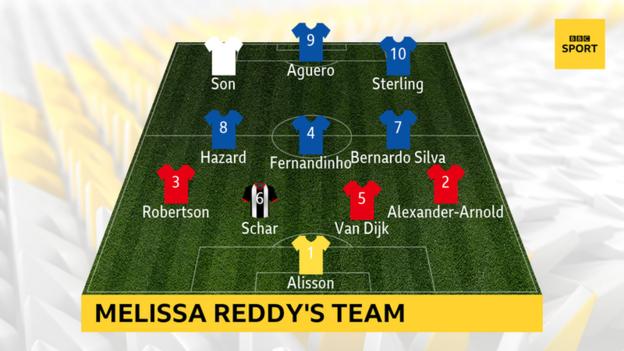 Again, the right-back position was split two each across the four pundits.

Lineker: Alexander-Arnold is a full-back I would have loved to have played with. He has a bit of everything, he does not defend as well as Wan-Bissaka but going forward - which is crucial for a modern player - he is a special player. His passing range is as good as any midfield player and he will probably end up playing there. He can take set-pieces too, has good crossing and of all the footballers we have, he is the most exciting talent.

Shearer: Wan-Bissaka's improvement has been incredible. The pressure that a young player is under is hard enough anyway but to be in a team battling relegation and be the stand-out player, playing so many games and staying injury free is magnificent.

Hasselbaink: Wan-Bissaka has come out of nowhere. I saw him against Eden Hazard and he held his own. At 20, he is still improving, getting stronger and he is so athletic. Nobody gets past him and he plays in a side that is not the best, but still shows composure and defensive solidity.

Reddy: We speak about young players and the pressure they are under, Alexander-Arnold not only got his opportunity but held on to it. He is doing it in a title-challenging team in a city where they are heavily reliant on their club. He has a lot of work to do in games and the expectations on him as a local lad, with Liverpool so desperate to end their title drought, the composure with which he handles it is excellent.

And a quick word on the others...

Lineker: Bernardo Silva's attributes are clear, he ghosts past players, is a lovely passer of the ball, can keep possession and creates chances for the side. He chips in with a few goals too.

Shearer: Sadio Mane, Sergio Aguero and Sterling have all had a superb season. I went for Mane because Mo Salah hit incredible numbers last season but he has not hit those this term and went a number of games without scoring. When he did not score, Mane stepped up and has 18 goals. He has had an excellent season.

Hasselbaink: I think Fernandinho is a class act, he is the best in the holding position. He is so unselfish and when you take him out of the Manchester City team, you see the difference he makes. He protects the back four and stops the counter-attacks. He gives the license for the three or four up front to stay there when they lose the ball.

Reddy: City are so deep with their squad, they can rotate and won't miss players but you notice when Fernandinho is not there. He picks up the second balls, can recycle possession quickly and is the safety net for all the attacking talents in the side. He is the destroyer, does all the dirty work and is so skilled in the dark arts of the game.

Think it should be different? Select your own team below.

My PL team of the season

Pick your Premier League team of the season and share with your friends.