McNeill - the first Briton to lift the European Cup in 1967 - died on Monday aged 79 after living with dementia.

Republic of Ireland international Bonner played under McNeill during both his spells in charge of Celtic.

"You had to have your socks up, jersey tucked in, clean shaven - little qualities," he told BBC Scotland.

"He was hard on us. I remember hanging up my jacket on peg before a game and he said 'hang it up properly'. He made me hang it up by the little loop at the back. He had a real presence."

'He was a giant of the game'

In two spells as Celtic boss, he won four titles and four cups. He managed Clyde, Aberdeen, Manchester City and Aston Villa too.

The club's current manager, Neil Lennon, described McNeill as "a giant of the game" in whose footsteps he is "lucky" to follow.

"When you think of Celtic and our incredible history, Billy is always one of the first names that comes to mind," said Lennon who, like McNeill, has captained and managed the club.

"I love Billy's statue, which is the first thing you see whenever you walk up The Celtic Way. It's the perfect image of him, holding aloft the European Cup, and it will remind future generations of supporters of what a great Celtic man he was." 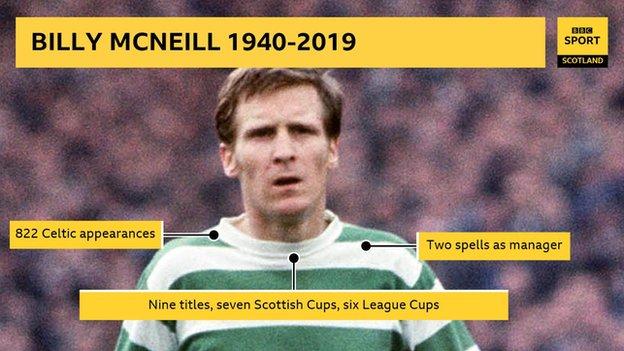 Scott Brown is another who has shared the "great honour and privilege" of succeeding McNeill as captain.

The 33-year-old was adamant that "there will only be one greatest-ever Celtic captain and that is Billy McNeill".

"Billy set the benchmark as a Celtic player and captain, and that's something everyone who pulls on the jersey has to aspire to," Brown said.

"It is only right that at a massive club like Celtic we have the highest targets to try to achieve, and those were set by Billy McNeill and that team who achieved such incredible things."

McNeill was given an ambassador role by the club in 2009 and a statue of him lifting the European Cup was erected at Celtic Park in 2015.

Chief executive Peter Lawwell said "there was no more fitting candidate" for the honour.

"It is often said that you shouldn't meet your heroes, but with Billy, as with all the Lisbon Lions, meeting them has always been a wonderful experience," Lawwell said.

"They have remained humble men, regardless of their incredible achievements as Celtic players, embodying everything that is good and positive about Celtic Football Club."

'We were very good friends'

Tributes to McNeill also came in from across the Glasgow divide.

Rangers' honorary life president John Greig captained the Ibrox club during the same era as McNeill led Celtic and described his counterpart as "a great man".

"We were very good friends for many years and we had a great respect for each other both on and off the pitch," he said.

"We were the captains of Rangers and Celtic in the past but, more recently, we received our honorary doctorates from Glasgow University on the same day which was a special occasion."

Another former Rangers rival, Sir Alex Ferguson, has also been recalling his duels on the pitch with McNeill, who he also replaced as Aberdeen manager in 1978.

"He was a giant, a man with an incredible presence and I'll always cherish the fact that we entered professional football at the same time," said the former Manchester United manager.

"We played against each other on many occasions and, as anyone who played against him will testify, he was the fairest of players. He was also a truly good man and will be a loss to everyone who knew him. Farewell Cesar."