Leyton Orient won promotion to the English Football League after their goalless draw against already-relegated Braintree Town confirmed them as champions of the National League.

The O's only needed a point to secure a return to the EFL after two seasons in the fifth tier, but title rivals Salford City were beaten 3-2 away at Hartlepool United, and Solihull were held to a draw at Dagenham & Redbridge.

Orient almost opened the scoring on the hour mark when Macauley Bonne found the net, only to be flagged offside.

Josh Koroma had a shot cleared off the line as the hosts pushed for a goal, but they did enough to secure top spot and the solitary automatic promotion place.

In a game which Orient dominated, the pressure on them began to ease as news filtered through of Hartlepool's three second-half goals against Salford.

Monday's goalless draw against Solihull had put Orient into pole position to win promotion as long as they avoided defeat by Braintree.

Salford needed to win with a five-goal swing against Pools and hope Orient lost, while Solihull had eight goals to make up if they won and both Salford and Orient were beaten.

There were rapturous celebrations at the final whistle, with over 8,000 home fans flooding the pitch as Orient's draw meant they had sealed their EFL return regardless of other results.

Orient's route back to the EFL 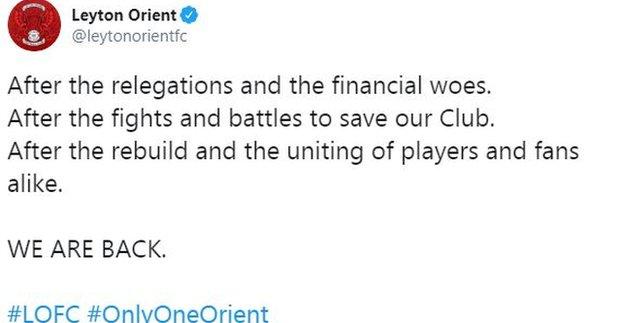 Orient sealed the National League title and promotion at the second attempt, having finshed 13th last season after their 112-year stay in the EFL came to an end in 2017.

Soon after their relegation the O's were taken over by a consortium headed by Nigel Travis, who helped turn the club around following a tumultuous three years of ownership under Italian businessman Francesco Becchetti.

The appointment of ex-boss Martin Ling as director of football and the return of former chief executive Matt Porter to the board of directors brought stability back to Brisbane Road.

The O's suffered just one league defeat in the first half of the campaign and five straight wins in March cemented their promotion credentials.

Top spot was virtually assured following a 0-0 draw at third-placed Solihull Moors on Easter Monday, leaving Orient three points clear at the top of the table with a superior goal difference over second-placed Salford City and the Moors.

Manager Justin Edinburgh, appointed in November 2017, seals his second promotion to the EFL, having guided Newport County through the play-offs in 2013.

The east London club could yet seal the non-league double, emulating Colchester United and Wycombe Wanderers. with the FA Trophy final against AFC Fylde coming up on Sunday, 19 May.

"I realised today [what it meant to the fans] after the final whistle and being involved in the celebrations and seeing the jubilation on so many people's faces.

"The players have played under an incredible amount of pressure home and away. We are everyone's cup final and I don't care what anyone says but everyone raises their game against us.

"What we have to realise is that today is a start and we're not going to step back or stay where we are, we want to try and continue to move forward.

"There's some players we need to try and keep at this club but where we are now, we shouldn't have any difficulty in keeping them."