For different reasons, Kevin de Bruyne and Mohamed Salah have not hit the heights of last season during the current campaign - but they both showed their quality when it mattered on Sunday.

With Manchester City and Liverpool both facing tricky fixtures and playing on the same afternoon for the final time in 2018-19, it was seen as potentially pivotal day in the title race.

But De Bruyne made two of City's three goals and put on a midfield masterclass as they clinched what was ultimately a comfortable win over Crystal Palace, a couple of hours before Salah's spectacular strike cemented Liverpool's victory over Chelsea to put his side back on top of the table.

Former Reds midfielder Danny Murphy explains how both players were so impressive, why they will have a big part to play in the title race - and gives his verdict on who will finish on top.

'At his best, De Bruyne is unstoppable'

Danny Murphy: "Injuries have spoilt De Bruyne's season so far, which tells you how wonderful City's squad is.

"Although they have been without someone who for me was the best midfielder of last season, and arguably the best player in any position full-stop, the destiny of the title is still in their hands.

"But what was also hugely evident against Palace was that, when De Bruyne is playing at his best, he is not far off being unstoppable.

"His ability to see a pass and open up teams is as good as any midfielder in the world, which he showed yet again with the way he set up City's opener for Raheem Sterling.

"Of course he has got a tenacious side too, and is willing to tackle back for the team, but that is the same for every City player. What De Bruyne brings is that extra quality on the ball that some of the others don't have.

"In the situation City are in now, chasing the quadruple, they are going to have some close games that might be decided in a single moment by someone who can be calm and see the all-important pass.

"For them it is all about who can make the difference when it is maybe 0-0 with 10 minutes to go in a big game - and De Bruyne is that man.

"Whether it be with a cross, a pass, a defence-splitting through-ball, a set-play or a strike from long range, you know that he will deliver. He can do the lot, and he makes it look easy.

"Whatever City win in the next few weeks, De Bruyne is going to play a massive part because, when he plays, they are a better team.

"The good news for them is that not only will he be fresh for the run-in, he also looks like he is finally getting back to full fitness and his best form.

"Pep Guardiola only brought him on right at the end of Tuesday's Champions League defeat by Tottenham, but I would be amazed if he is not in another starting line-up in the next few weeks."

'Salah's goal was a reminder of how good he is'

Danny Murphy: "You cannot really compare Salah's campaign up until now to De Bruyne's - he has played nearly every game this season and has actually made a massive contribution to getting Liverpool where they are, even though his goals tally is down from last year.

"Because he has not been as prolific, he has taken some unfair criticism but, whenever I watch him play, he still has that same hunger and sharpness. He still occupies opposition players and puts himself in wonderful positions.

"I like his humility when I hear him talking about how important it is that the team wins games and trophies, rather than any success being all about him.

"I think that says a lot about him, and that's why I was pleased to see him score on Sunday, especially with such a wonderful strike.

"Even before his goal, his performance against Chelsea was as good as I've seen from him - right from the start, with his touch and his appetite.

"His goal was sensational though, and of course that rounded it off because it was always going to create more emphasis on his performance, but even if he had not scored then I would be praising him.

"Because what Salah did last year was so remarkable, there was a kind of inevitability that people would question him if he did not repeat it.

"I don't see how anyone can say he is having a poor season, because he is joint-top Premier League scorer with City's Sergio Aguero. The fact he has a very good chance of winning the Golden Boot again says it all.

"Defenders know him, and what he wants to do, better this season but they still can't stop him. 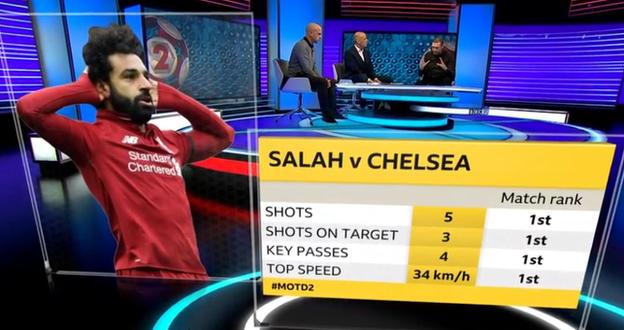 "Teams have actually set up to deal with him, but that just means other players like Sadio Mane, have been given more freedom to contribute more than they have done before.

"All of that is positive, because it is important that you are not reliant on one player too much, but Salah's goal on Sunday was a reminder of how good he is.

"He is a big-game player, a world-class talent who will score more big goals between now and the end of the season in the Premier League and in Europe."

'One slip now is all it takes' - Who will win the title?

Danny Murphy: "All goals are important, but Salah's strike on Sunday took the roof off Anfield.

"Liverpool have scored a lot of important goals in recent weeks - some fortunate - but that one was so good it made the fans believe they would win that game. They kind of saw it out together, the players and the crowd.

"Whether it is a wonder goal, deflected goal or goalkeeper error that gets you the points, nobody really cares once the game is won, but of course a strike like that is going to give everyone a lift when the title is on the line.

"I don't think Reds boss Jurgen Klopp, his players or the fans will be getting carried away, though. It was a great performance capped off by an unbelievable goal but their situation has not changed - City have still got so slip up somewhere.

"How ironic it is, given the rivalry between Liverpool and Manchester United, that it could be City's trip to Old Trafford next week that decides the title race.

"I think Liverpool will win their last four games - I would be amazed if they don't.

"That would mean that, if City do slip up, then Liverpool will be champions.

"City have to play Tottenham first but going to Old Trafford will be a massive test for them because it is a derby and United have still got a lot to play for.

"For all the 'we don't want Liverpool to win it' you hear from United fans, they still want to finish in the top four.

"And players don't have that supporters' mind set anyway. The United team will want to win that game because when you go on the pitch you have your personal pride, pride for your family and the club you are playing for, and respect for your manager.

"In United's case, they will also want to play Champions League football next season.

"Yes, United have got some injuries and they are not playing well but when it comes to the crunch they are going to be playing City under the lights at Old Trafford and, if they win, they have got a great chance of making the top four.

"So of course they are going to be well up for that, and it is going to be one heck of a test for City to take three points from a game they will need to win.

"My gut feeling is they won't do it. I just have a feeling that they will drop points against either Spurs or United.

"Don't get me wrong, if City go and win every one of those games comfortably and play brilliantly, it would not surprise me because they are such a good team, but their run-in is more difficult and they are more likely to slip up.

"Whoever wins it now, Liverpool and City both deserve huge credit for their consistency and also their style.

"The sad thing is one of them has to finish second with a points tally, attacking power and way of playing that would have won many a league title down the years, but it is going to be great to watch and find out who ends up on top."