Just a handful of years ago, David Turnbull spent his school Easter holidays standing on the periphery of a muddy training pitch, warmed with excitement.

Along with his dad and brother, the Lanarkshire schoolboy would make the short journey to Motherwell's Dalziel Park training base, a regular pilgrimage to grab a photo or autograph with one of his heroes.

Now, the 19-year-old is no longer on the periphery. Instead, he is at the very heart of the team he has supported all his life, providing the beating heart behind their 2019 resurrection that has taken them for relegation fodder to top-six contention.

"The other day at training there was a few young boys down watching us because it is the holidays. That's what I used to do," Turnbull told BBC Scotland.

"It's brilliant. I used to be one of those wee boys asking for pictures.

"I'd always dreamed of playing for Motherwell."

'I just want to keep doing what I'm doing for Motherwell'

Turnbull's ascent into the Motherwell first team has been meteoric.

Three games in meaningless post-split fixtures last season game him a flavour of first-team football. A couple of substitute appearances followed this term, before a start against St Johnstone in October propelled him into the realms of a regular under Stephen Robinson.

Since then the Fir Park academy graduate has scored nine times and claimed five assists on the way to participating in 38% of Motherwell's Premiership goals this season. 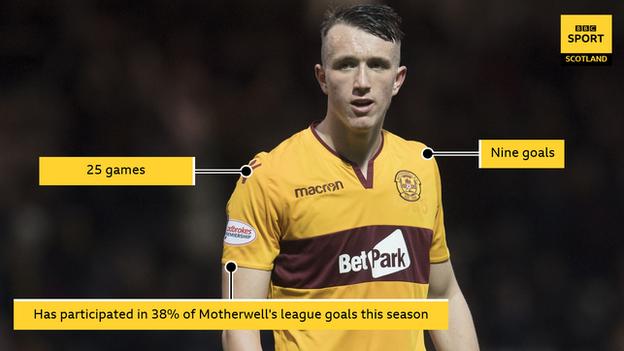 "I didn't think I'd make the impact this season I have done if you look at the goals I've contributed. It's just been amazing," he said.

"I know what I can do and I'm always confident. I'll try do my best, make things happen and score goals.

"I just want to keep doing what I'm doing at Motherwell."

Motherwell's top-six dream may have died at Pittodrie on Wednesday night but the Fir Park club still have designs on a strong finish to the campaign.

Well have won their last five home games on the bounce. Up next is Sunday's visit of Rangers, and Turnbull added: "I can't wait for the game on Sunday. I feel we can get a result.

"I hope we can just make up for the last time at Ibrox [where Rangers won 7-1]. It was tough but we need to move on, learn from it, and try to put it right on Sunday."

'It's set up for a brilliant game tomorrow' - analysis

I don't think Rangers can relax too much with Kilmarnock and Aberdeen winning their games, the race for second is still on although Rangers have quite a comfortable lead.

It's a difficult game for Rangers. I thought that they were brilliant during the week against Hearts, it was probably one of their best performances of the season. They've proven they can live without Alfredo Morelos, I thought Jermain Defoe was good, Steven Davies looked back to his old self, Glen Kamara in the midfield was good as well.

But they're going to a club whose home form is absolutely sensational, five wins in a row for Motherwell. They are not just winning games at home, they are winning them scoring goals and playing great football. It's set up to be an absolutely brilliant game tomorrow.