Brighton manager Chris Hughton said "it could have been worse" after his side were thrashed 5-0 at home by Bournemouth.

The Seagulls' Anthony Knockaert was sent off in the second half for a reckless tackle on Adam Smith, with his side already behind to goals from Dan Gosling and Ryan Fraser.

Further goals from David Brooks, Callum Wilson and then Junior Stanislas in injury time sealed a result that leaves Brighton one place above the relegation zone.

"In the end it was about keeping that score down. The fear is - it could have been worse," said Hughton.

The Seagulls are five points above next-placed Cardiff, who visit the Amex on Tuesday, 16 April.

"I think it was one of the poorest performances since I've been here," added Hughton, who took over at Brighton when the club were near the foot of the Championship in December 2014.

Bournemouth climb into 12th in the table, and with 41 points they are close to securing their place in the Premier League for a fifth season.

The Cherries won for only the fourth time away from home this season, with their other victories on the road coming at Watford and relegated Huddersfield and Fulham.

Brighton did not get an effort on target until the 91st minute, when Bernardo's header was easily saved by Artur Boruc.

If Brighton's run to the last four of the FA Cup had taken their minds off their league position for a short while, this performance and result will have brought reality crashing back.

Not even being on home turf would have brought much solace, with just six wins and only 17 goals scored in 15 league outings at the Amex this season prior to kick-off. 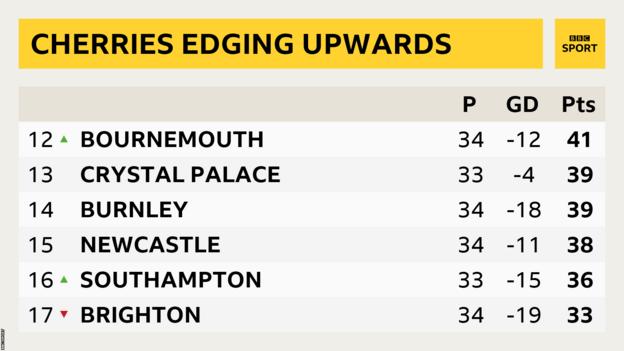 But while Brighton won plaudits for their resilience against Manchester City at Wembley last time out, manager Chris Hughton saw his side give Bournemouth time and space to repeatedly cut through their defence even when they still had 11 players on the pitch.

Hughton was furious when Gosling was given the time to line up Bournemouth's first, but the way he blanked Knockaert as the French midfielder walked into the tunnel following his red card also spoke volumes for what the Seagulls boss now has to contend with.

The collapse in morale both on the field and in the stands following Knockaert's dismissal means that Cardiff's visit on Tuesday, with the Welsh club five points behind, now takes on even more significance.

Bournemouth started the match 10 points and four places above the relegation zone, but for manager Eddie Howe this was not a position of safety.

Defeat at home by Burnley a week earlier prompted Howe to state his side "could not take any liberties" following the result, the latest in a poor run of one league win in nine since the start of February.

But after soaking up what little Brighton had to offer in the first 30 minutes, Howe's side took control when a slick exchange of passes between Gosling and Wilson ended with Gosling scoring his first goal in over a year.

Fraser's seventh goal of this season had a touch of luck, with the Scot slipping over as he shot from outside the penalty area to make it 2-0 to Bournemouth.

The impressive Fraser helped put the result beyond any doubt with key contributions in the build-up to Brooks' and Wilson's goals.

Stanislas' clincher in stoppage time gave Bournemouth their biggest-ever away win in nearly four full seasons in the Premier League.

Brighton manager Chris Hughton: "We came up against a very dynamic Bournemouth side and couldn't handle them.

"We are in a fight at the moment. Our form is very up and down. This was on the back of a very good performance last week. We have to show our character on Tuesday. Once the players cross that line it's only them who can do that."

On Anthony Knockaert's red card: "It was a reckless challenge. It was the right decision. I've spoken to the team and I think it was one of the poorest performances since I've been here. Especially knowing the qualities of the team we were playing against."

"We're pleased with some of the goals we scored today. We countered with devastating effect in the second half so I'm really pleased.

"We restricted them to only a few chances and we know if we can do that to teams then we can hurt them.

"We've been hesitating and spluttering in recent weeks so it's good to get back into the groove and show what we can do."