Well, after 1,387 days, the 29-year-old finally made his Benfica first-team debut on Saturday, almost four years after signing for the Portuguese club from the Rs.

Taarabt was a joy to watch at QPR in the 2010-11 Championship season, treating us to long-range top-bin curlers, nutmegs for days and Panenka penalties.

He was voted Championship player of the season as QPR secured promotion to the top flight, but life in the Premier League didn't end up going too well for the Moroccan.

After being called overweight by Harry Redknapp in 2012 and sent out on loan all over the place, Taarabt moved to Benfica in 2015 after his contract was terminated by mutual consent.

Four years (and more loans) later, the Moroccan wizard's debut in Lisbon definitely got some Twitter users feeling nostalgic, with some dusting off the 'the streets will not forget' meme. 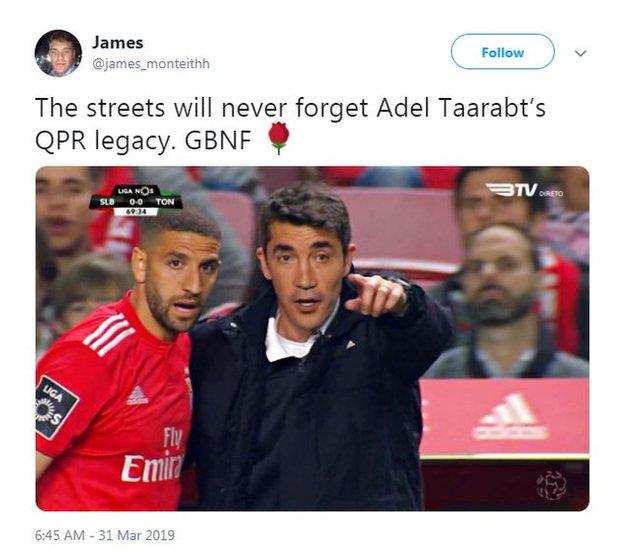 It's a popular trend that's been doing the rounds on Twitter. You get a player who showed glimpses of class in their career, post some photos or a skills montage and caption it with: 'The streets will never forget.'

There's been some worthy mentions: Portsmouth's Benjani and Blackburn's Roque Santa Cruz have got the same treatment, but here are some more players who deserve to never have their names forgotten - least of all by the streets.

Newcastle United fans have been treated to some absolute dream strike partnerships over the years: Andy Cole and Peter Beardsley, Alan Shearer and Les Ferdinand, and even Obafemi Martins and Michael Owen were a handful.

But there was something about the Senegalese duo Demba Ba and Papiss Cisse that was a little different. The two came to Tyneside without much of a reputation - no-one really knew what to expect.

Ba had played a bit for West Ham and joined Newcastle on a free in June 2011 after failing a medical at Stoke, with Cisse joining from Freiburg in January 2012 after netting a few in the Bundesliga. Neither were exactly jaw-dropping signings.

However, the 2011-12 Premier League season was sensational for the Magpies.

With Alan Pardew at the helm, Ba and Cisse fired Newcastle to fifth place, within touching distance of a Champions League spot, scoring 29 goals between them.

And we all remember that Cisse banana goal against Chelsea, don't we? Right by the the touchline at Stamford Bridge, in front of Newcastle's away support, outside of the boot, arching over Petr Cech and into the top corner - boom. Thank you Papiss Cisse.

The pair's fine form ultimately led to their downfall - for the Magpies at least - as it earned Ba a move to Chelsea in 2013, breaking up this magnificent duo.

Nineteen goals, 35 games and a ninth-place finish in the league. Michu really did light up the Liberty Stadium after his move to Swansea in 2012-13.

The striker was essential to not only Swansea but almost everyone's fantasy football team.

He scored twice at Arsenal, securing a famous 2-0 win for the Swans, and in both games against Manchester United.

It truly was a season in which anything he touched turned to gold. Headers, right foot, left foot - it was Michu's world and we were just living in it. He even helped guide the Swans to the League Cup.

However, Michu wasn't white hot for long. Injuries put paid to that. The Spanish striker never rediscovered his 2012-13 form, scoring twice in his second season in Wales and only making three appearances for Napoli when he joined on loan in 2013.

He retired in 2017 because of injury but we will never forget that memorable first season in the Premier League.

Back to Tyneside and step forward the French magician, Hatem Ben Arfa.

Initially joining on loan from Marseille in 2010, Ben Arfa was one of the hottest young prospects in football and he did not disappoint.

Twenty five yards out? No problem - straight in the top corner. Nutmegs, step-overs and flicks, it really was a sight to behold.

One particular goal in 2012 saw him pick up the ball in his own half, dribble through the Bolton defence and stick it home.

Ben Arfa became a fully-fledged Newcastle player in January 2011, signing a four-year deal, but struggled to consistently produce good performances. It must have been frustrating for Newcastle fans as they knew what he was capable of.

He left Newcastle in 2015 and moved back to France and Ligue 1. After spells at Nice and Paris St-Germain Ben Arfa found himself at Rennes, playing regularly and trolling Arsenal manager Unai Emery.

It's easy to forget that Russian winger Andrey Arshavin was one of the world's best players for a brief time between 2008 and 2009.

He signed for Arsenal in January 2009 after leading Zenit St Petersburg to Uefa Cup glory in 2008 and being one of the stars of the European Championship that summer, helping Russia to the semi-finals.

Three months after he signed for Arsenal, the Gunners faced Liverpool at Anfield in a blockbuster of a game, with Arshavin scoring all four in a 4-4 draw that effectively ended Liverpool's hopes of the Premier League title.

Arshavin went on to score a belter against Manchester United in August 2009 and helped Arsenal secure a famous first-leg win over Barcelona in the Champions League in 2011, but that was about it.

He returned to Russia with Zenit in 2013 and later moved to the Kazakhstan Premier League, retiring from the game in December 2018.

They may not have lit up the football scene season after season like some of the game's legends but if it weren't for these players football wouldn't be the same.

The streets won't forget, and neither should we.