Ole Gunnar Solskjaer has challenged his Manchester United players to "work harder" - and warned them against complacency because they will "never last at this club".

The former United striker was named the club's permanent manager on Thursday, having arrived on an interim basis in December to replace Jose Mourinho.

Under the Norwegian, 46, United have lost only once in 13 league games.

"We are looking forward, we have got to work harder," Solskjaer said.

"I want a Man Utd team to be one of the hardest working, fittest teams and that will bring results.

"Now the players know I am here for longer than expected. Players that get complacent never last at this club."

Speaking at Old Trafford after signing a three-year contract, he described the position as his "ultimate dream", and revealed Sir Alex Ferguson was one of the first people he called after his position was made permanent.

"This has been my ultimate dream, maybe a naive dream," he said. "But I've always had that dream in my mind.

"It's a huge, fantastic family of a football club and I'm so honoured to be given the responsibility."

Solskjaer spent 11 seasons as a United player, scoring the winning goal in the 1999 Champions League final.

When he took charge, United were sixth in the Premier League and 11 points off the top four. They are now just two points behind Arsenal, who occupy the final Champions League qualifying spot.

"I'm just going to be myself as I've always been. I know the trade of course. I want us to lift trophies but I can't wait to get to the challenge of improving the squad," Solskjaer said.

"We have worked with them, for three months and the improvement is there to be seen. We know there is so much more to come from them.

"Every day in training the attitude has been fantastic but we know we've a long way to go. It's going to be a mountain to climb but we've climbed a few mountains before."

'We expect to lift the Premier League trophy again'

United have not won the Premier League since 2013 - Ferguson's final season in charge - though they finished second behind Manchester City last term under Mourinho.

When Solskjaer returned to the club, United's points tally was closer to the bottom of the league than the top, but he has since led them to victories at Tottenham, Arsenal and Chelsea, with a top-four finish now within their grasp.

Solskjaer's aim is to one day lead United back to the top of the table but he admits it may take some time.

"To lift the Premier League trophy again is what we expect, what we're used to, what we have done so many times," he said.

"We can't wait too many years but it's not going to happen overnight.

"I know we will be successful but it's about taking it step by step.

"What I have done before as a player doesn't really bother me because I am always looking forward.

"It was fantastic to work with the best manager in the world but now I am working here as the manager and I think that's a bigger achievement."

Towards the end of Mourinho's reign, players and staff were understood to be unhappy with his style of football and development of younger players, while he was also publicly critical of players including Paul Pogba and Luke Shaw.

But Solskjaer immediately boosted morale upon taking over at the helm, with Pogba, Shaw and striker Marcus Rashford regaining their form under his management.

Anthony Martial signed a new contract at Old Trafford in January and he hopes his now permanent position will encourage other players to follow suit.

"To know who is the manager next season is helpful for any player," he said.

"We have a couple of players we are in talks with and hopefully we can get their futures sorted."

He added: "It's about putting a smile on people's faces."

Solskjaer plans to bring in new players over the summer and revealed numerous agents had been in touch to "say their players want to come here".

"I have got some targets," he added.

"There are so many players that have been written about that we're interested in and I'm sure when we decide what we have to do, hopefully we'll get them by pre-season." 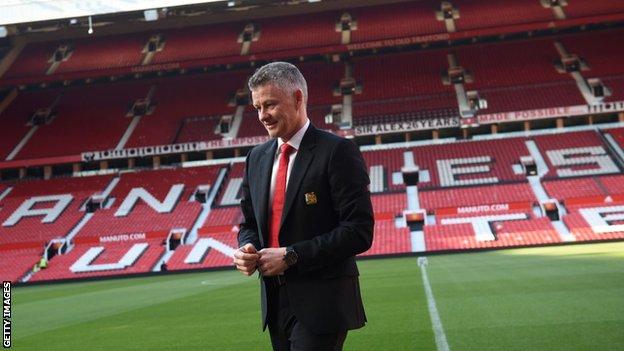 It is easy to see why Ole Gunnar Solskjaer has ended up getting the manager's job at Manchester United.

He just fits the role so easily.

The Norwegian walked into the Number Seven Suite at Old Trafford, held up a shirt bearing his name and the number one and then began to talk easily about his hopes, dreams and targets for the future.

He is evidently not overawed by the size of the job. He is clear sighted enough to know what he needs to do to return the club to their former status, and he knows fighting for a top four slot, as United must do this season, is not what is expected.

His pay-off line was excellent: "The day I walk out of here I hope it is with a smile on my face and I have given the fans a good time."

In order to achieve that, he needs to deliver attractive, winning football.

That means sifting through the numerous potential targets who, United have been told via agents, are interested in moving to Old Trafford.

It means successfully choosing which players to keep and which to let go, and it means bringing through players from the club's academy which has so much been part of their tradition since Sir Matt Busby's day.

It is not going to be easy, but it is hard to imagine anyone starting the task with so much goodwill, from inside and outside the club.