Fulham have been relegated from the Premier League with five games still to play after being hammered by Watford at Vicarage Road.

The Cottagers needed to avoid defeat to put off their inevitable demotion for another week and were level at half-time, Ryan Babel having equalised after Abdoulaye Doucoure's stunning opener for the Hornets.

However, second-half goals from Will Hughes, Troy Deeney and Kiko Femenia condemned them to an immediate return to the Championship.

Fulham spent more than £100m on 12 new players last summer but the quality has been lacking all season.

Their players looked dejected as the final whistle confirmed they will be playing Championship football alongside Huddersfield next season, making 2 April the earliest date two clubs have been relegated from the Premier League.

Fulham had lost their previous eight Premier League games and, with just two points away from home all season, a visit to high-flying Watford always seemed to be a tall order.

Caretaker manager Scott Parker has overseen five defeats since replacing Claudio Ranieri and now relegation is confirmed, it is clear a significant rebuilding job will be required.

The Cottagers impressed in the Championship last year, coming up through the play-offs, and were tipped by many to make a positive impact in the Premier League. 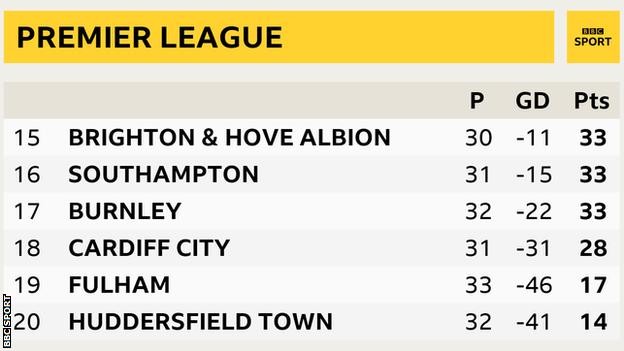 However, it has turned into a nightmare with two managers sacked and 76 goals conceded so far - 17 more than Huddersfield Town, Cardiff City and Burnley.

Babel, Sessegnon and Aleksandar Mitrovic all had chances to put the Cottagers ahead in a dangerous spell after that but the break halted their momentum and they fell apart in the second half.

Parker will hope that they can restore pride in their final five games before another hard season in the Championship.

Watford have been quietly impressive this season and move up to eighth with this comprehensive victory - a point behind seventh-placed Wolves, who beat Manchester United 2-1 on Tuesday.

Javi Gracia's side have already reached their highest points tally in the Premier League era and they go into Sunday's FA Cup semi-final with Wolves in confident mood.

Second-half substitute Andre Gray has tormented Fulham in the past and once again he proved the difference, his bristling pace and direct running causing huge problems for the visitors' fragile backline.

A mesmerising piece of skill from Gray set up Deeney for a tap in on 69 minutes before he slipped a pass to Femenia to round off the victory shortly afterwards.

Those goals put the gloss on two earlier strikes from Doucoure and Hughes, the latter a thunderbolt volley from the edge of the box that flew into the top of Sergio Rico's net.

Watford have not lost at home since Boxing Day and, with six games to play, will have their sights set on finishing as best of the rest behind the runaway top six.

Man of the match - Will Hughes

The stats - long wait for an away victory

'Devastated for the club' - What they said

Fulham manager Scott Parker: "I am obviously bitterly disappointed, devastated for the football club and fans. We always knew it was a tough ask to stay up but it is the way we lost the game which is most disappointing for me.

"The five or 10-minute spell when we conceded three goals was our season in a snapshot.

"I have ideas of [where it went wrong] but it's not the time to broadcast it. When a club gets relegated you know there are some serious issues."

Watford boss Javi Gracia: "We can now think about the next game - an important game, a semi-final. All the people are looking forward to the moment. To achieve 46 points is something amazing.

"Fulham played better than us in the first half but the whole team was much better in the second half. We are keeping a good level throughout the season."

Watford have an FA Cup semi-final at Wembley against Wolves on Sunday (16:00 BST).

Fulham have a weekend off before taking on Everton at Craven Cottage on Saturday, 13 April (15:00 BST).