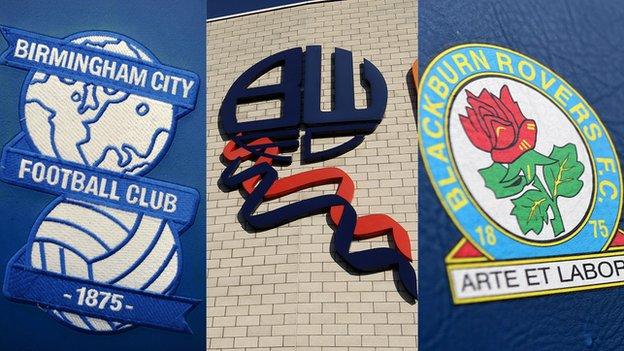 Financial issues and Championship football clubs beginning with 'B' appear to go hand-in-hand.

Yet in recent days, one faced a winding up order and the other posted record losses just a few years after both lost their places among the Premier League elite.

And then there is Birmingham City, who on Friday were deducted nine points for a breach of profitability and sustainability rules.

In seven charts, football finance expert Kieran Maguire assesses how the three clubs got to this point - and asks if there are lessons other clubs can learn from them.

"Club records were broken, bridges were built and memories were made," announced the opening statement of Blackburn Rovers' accounts last week.

But one record that the club may not be so proud of is making a loss of £17.5m in that financial year - a record for League One. Although some clubs have yet to announce their results and others choose not to publish detailed profit figures, Rovers' losses are higher than the other six clubs who have reported to date.

When Venky's bought Blackburn Rovers in November 2010, the club was 14th in the Premier League and had annual income of more than £57m. Since then, the owners have overseen a club that has been relegated twice while revenue has fallen below £9m as it ended the season as League One runners up to Wigan Athletic.

Under Venky's, Rovers have had operating losses of £153m in eight years, losses underwritten to a small extent by player sales but mainly by the owners themselves, who had lent the club £109m interest free by 30 June 2018.

The reason for these losses is simple.

Since Venky's acquired Blackburn, the club has generated income of £237m and has had player costs of £305m, which has meant that the other running costs as well as a sizeable proportion of the player costs have been funded by the owners.

The Indian owners have been unpopular with a section of the fanbase with #VenkysOut appearing regularly on social media as the club was relegated in 2011-12 and only managed a top half finish in the Championship twice in five seasons thereafter - despite Premier League parachute payments, designed to soften the financial blow of falling from the top flight, for three of those seasons - before finally being relegated in 2016-17.

A few miles away from Blackburn, Bolton Wanderers fans have been wondering whether or not they had a team to support as their club faced a winding up order from HMRC in respect of unpaid taxes on Wednesday.

Wanderers' finances to a certain extent mirrored those of Rovers, with a benevolent owner in the shape of Eddie Davies, who acquired the club in December 2003.

Bolton finished eighth in the Premier League in 2003-04 and maintained their status in the top flight until 2011-12 - but this came at a significant financial cost.

While initially Bolton were making a profit, the recruitment of players such as Nigerian superstar Jay-Jay Okocha, France internationals Youri Djorkaeff and Nicolas Anelka and Spain and Real Madrid's Fernando Hierro came at a cost as wages rose faster than income and player costs, which had been just over half of income when Davies arrived, rocketed quickly.

Soon the club was paying out more in player costs than they were generating as revenue.

As the Trotters finished eighth, sixth, seventh and sixth from 2004 onwards and twice qualified for the Uefa Cup, Davies decided to underwrite the losses made by the club because as a wealthy fan he wanted to give something back.

Even in the Premier League, the club was haemorrhaging money and lost nearly £100m in its last six seasons in the top flight.

The losses continued in the Championship despite the benefit of parachute payments and Davies underwrote these, but a combination of failing health and a small but vocal critical element within the fanbase resulted in him deciding to cut ties with the club and cease to fund the losses, with HMRC threatening to have the club wound up for unpaid taxes.

To make the club attractive to new owners, Davies wrote off £170m of the loans he had advanced to it over the years when covering the losses. In addition, some property assets were sold to generate cash to keep creditors at bay.

With the club close to administration, Davies sold it to former player Dean Holdsworth and businessman Ken Anderson in February 2016. Holdsworth has since severed his relationship with the club, leaving it in the hands of Anderson, a former football agent who was banned from being a company director in the UK for eight years from 2005 but passed the EFL Owners and Directors test when his disqualification ended.

Davies died in September 2018 and four days prior to passing away loaned the club a further £5m.

There have been many winding up orders and stories of unpaid staff and suppliers, culminating with another attempt last week from HMRC to have the club wound up for unpaid taxes. The club have a two week stay of execution with Anderson trying to find new owners who are prepared to fund the day to day running costs.

In respect of Birmingham, who have been in the Championship since 2011, their financial figures have changed drastically in the last couple of years.

After a period of relative austerity, Birmingham started to recruit players for substantial fees along with loans and Bosman signings.

The level of spending sanctioned by the Birmingham owners that started in 2016-17, which appeared to be best described as haphazard and spendthrift, meant that the club was given a soft transfer embargo by the EFL in the summer of 2018.

The subsequent signing of Danish defender Kristian Pedersen, which was registered by the EFL despite the club being unable in theory to sign players for a fee, further compounded the initial felony.

All three clubs are this season competing in a division where loss making is seen as the norm as the promised land of Premier League riches lie just over the horizon.

The 17 clubs who have reported to date have collective operating losses of £366m, and with Fulham, Sunderland, Sheffield Wednesday, Brentford, Derby and Bolton still to announce their results the Championship could be reporting a total operating loss in excess of half a billion pounds.

The reason why clubs in the division struggle is one of lack of control of player costs in terms of both wages and transfer fees.

Whoever chooses to take on the responsibility of running a Championship football club will realistically have to be prepared to pay out huge sums every month to keep the club afloat, in either an attempt to keep the club from League One, where clubs earn broadcast income of about £1m or achieve promotion to the Premier League where they can earn a minimum of £100m.

But as we have seen with Birmingham, pushing the boat out too far can have consequences.

The EFL's nine-point deduction punishment of Birmingham will set a precedent which will be seized upon by both supporters and critics of the rules. The cheerleaders claiming it will act as a deterrent and encourage better housekeeping.

Alternatively, the conspiracy theorists will claim that Birmingham were unlikely to secure a play-off place or be relegated before the ruling and realistically nothing has changed as a result of the punishment so the club is no worse off than before.

Kieran Maguire is a lecturer in football finance analysis at the University of Liverpool where he teaches on the Football Industries MBA course.