Booed by his own fans and with his place under threat as the England endured a dismal Euro 2016, the Manchester City forward was the focus of much criticism and plenty of abuse.

But fast forward three years to their first qualifying match for Euro 2020 and Sterling was the hero, scoring a hat-trick and winning a penalty as the Three Lions thrashed the Czech Republic 5-0 at Wembley.

For Sterling, who grew up down the road from the national stadium in Brent, it was the stuff of childhood fantasy.

"I'm excited," he said. "I'm in my hometown and this is what dreams are made of - so I'm really happy to see it come true."

'He has had difficult moments - but he's turned full circle'

Sterling had a hand in England's first four goals against the Czechs - the opening game for both teams in Group A on the road to the finals, which will take place across 12 countries.

He opened the scoring with a back-post finish from Jadon Sancho's cross and was fouled for the penalty Harry Kane converted to put England 2-0 up by half-time.

The 24-year-old then turned and finished superbly for his second, before completing his hat-trick with a 20-yard shot that deflected in off Ondrej Celustka.

It was the first hat-trick by an England player at Wembley since Jermain Defoe against Bulgaria in 2010 and was a landmark moment for Sterling, who had scored only four goals in his previous 47 internationals.

Before his double in the Nations League victory over Spain in October, Sterling had endured a 27-game, three-year barren spell for his country. But these latest goals - meaning he has now scored with four of his past six shots for his country - suggest those struggles are behind him.

"I'm delighted for him to get the reaction that he did from the crowd," said Southgate. "We can't hide from the fact that he's had difficult moments with England.

"The goals in Spain were an important moment for him. You could see the release that brought.

"At times, you could almost see the thought process in the past - but he's hungry for goals.

"I know he's spoken about that before, of how he's added that incentive to his game, and I thought he was devastating tonight."

Former England midfielder Chris Waddle on BBC Radio 5 Live: "He had that dry spell but now he is getting the chances and he's tucking them away. England have a lot of players who are comfortable with the ball. We were relying on Raheem Sterling to do that, but now we have three or four and it frees space up for Sterling.

"He pops up in gaps. He is in a team where the movement is good and there is confidence. We don't have to just rely on him and he is getting the benefits of it. Expectations have always been high on Sterling. He is now getting better and is playing in a team full of confidence - whether it is Manchester City or England."

Ex-England midfielder Joe Cole on ITV: "His development is going through the roof and his decision-making is getting better and better. He's turning himself into a midfielder with a striker's mindset. It's a great achievement to score a hat-trick for England."

BBC Radio 5 Live presenter Darren Fletcher: "Sterling has turned things full circle from being a player who was booed by his own supporters to being appreciated and adored."

Ex-England defender Lee Dixon on ITV: "Pep Guardiola has given Raheem that belief in his own ability. We've all criticised his finishing at times but now he has so much confidence." 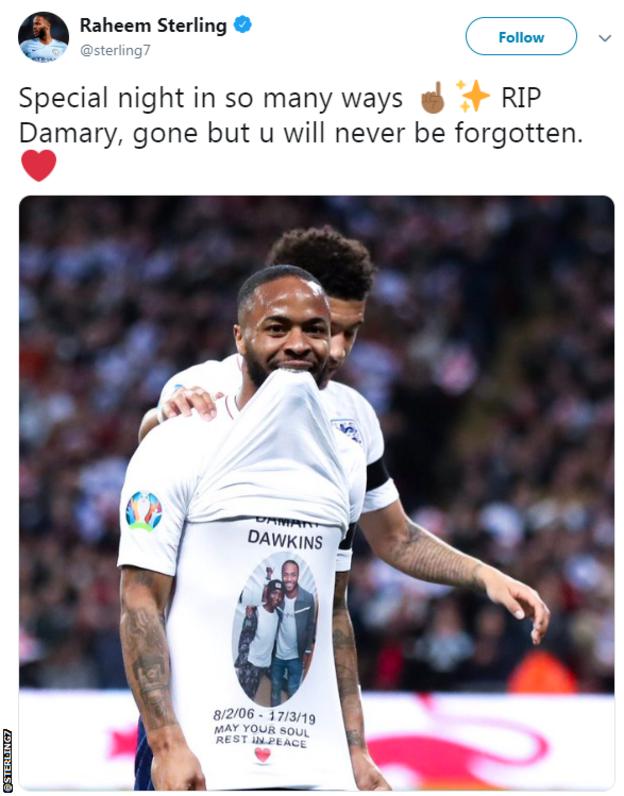 He lifted his jersey to reveal a T-shirt with a picture of 13-year-old Damary Dawkins, who died on Sunday after suffering from leukaemia.

"Damary was a kid that I was trying to help and we thought that we found a donor," Sterling told ITV. "Sadly it didn't match and he sadly passed away.

He later added on social media: "Special night in so many ways. RIP Damary, gone but you will never be forgotten."

'Doing what he does best' - how you reacted on social media

James Stevenson: Well, I'm pleased for Raheem Sterling. He's had some unfair and some justified criticism for England in the past.

Richard Cumiskey: And people say Sterling doesn't perform in an England shirt. What a season he is having.

Ed O'Toole: Wow. England showing that getting to the World Cup semis was no fluke. Playing well and Sterling deserving his hat-trick. With such a young squad as well...

Baka Omubo: The raw potential of Sterling was always there but Guardiola moulded him into a better, more complete footballer.

Josh Earl: Raheem Sterling doing what he does best. Silencing the critics and being an all-round class act.

Rachel T: Sterling on the up! Great stuff!