Scotland's 3-0 defeat by Kazakhstan is officially their worst-ever result in a competitive match, sports data company Gracenote has claimed.

Its world football ranking takes into account the relative standings of the teams along with the match scoreline.

"If Scotland had lost to Kazakhstan by a single goal, it would have been the sixth worst," Gracenote head of sports analysis Simon Gleave says.

"The three-goal margin takes it up to the top of the list."

According to the date company, a 2-1 home defeat by Poland in qualification for the 1966 World Cup finals had held the top spot as their worst-ever result for more than 53 years.

"Scotland's 2-1 defeat in Israel in October last year is also amongst the top-20 worst results achieved by the Scottish national team," Gleave added.

Thursday's defeat in Astana gave Alex McLeish's side a worst-possible start in their Euro 2020 qualification group.

Scotland are ranked 40th in the world by governing body Fifa, with Kazakhstan 117th.

Gracenote ranked Kazakhstan at 136, with Scotland 45th, but following the result in Astana, McLeish's side are down four places and the victors up to 118. 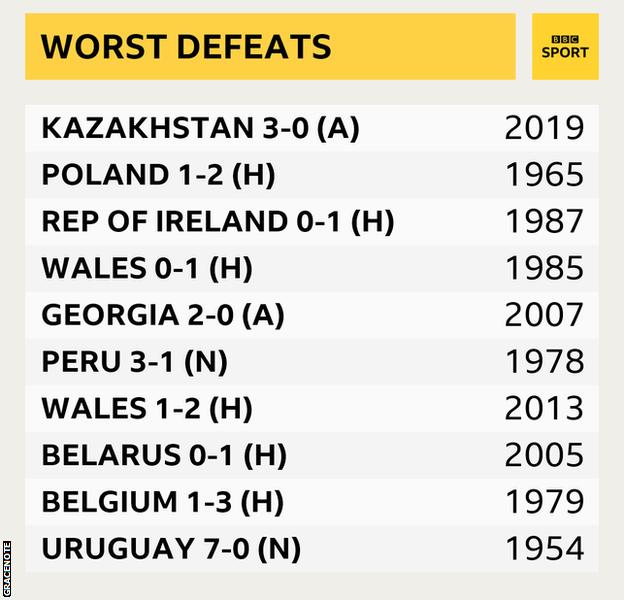 I've had this feeling before, so it is not unexpected.

The pattern since 1998 has been abject failure, so results like this appear regularly in Scottish football history and recently we've lost in Georgia twice and they had a dreadful home record, as had Kazakhstan.

We head out a long way with a series of call-offs and I'm putting forward a slight case for the manager in that he was left with a bag of potatoes really regarding a set of players.

There is an element of the players letting Alex McLeish down, but the body language was pretty poor and the game was over after 10 minutes.

Unlike our rugby colleagues, who got the troops together at half-time against England and turned it round by showing passion and pride, there was none of that on show.

He was an unpopular choice right from the start and, doing a trawl on social media, you would be hard placed to find anybody who actually thinks he should be staying in the job.