How many teams do you need for an interesting relegation battle?

Five? Six? Try 13. And cast your eyes towards League One.

More than half the sides in England's third tier are still in real danger of going down with a few weeks of the season remaining.

Incredibly, any one of 12 teams could be in the relegation zone after Saturday's football is done and dusted. So how did it get to this?

'We got seven points in a week and went bottom' 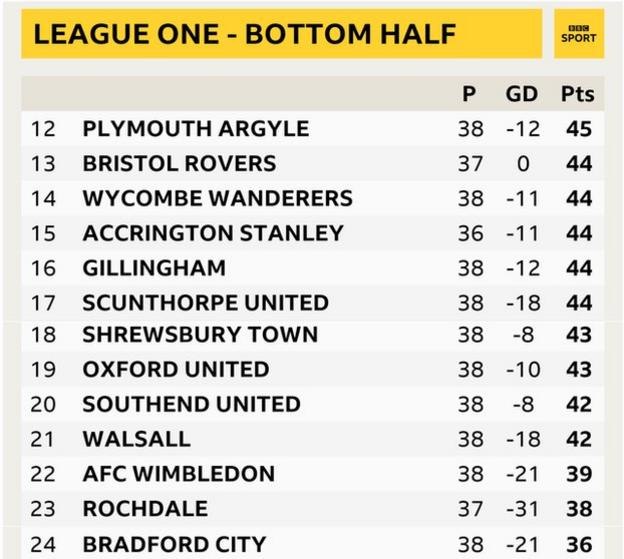 View the full League One table

The short answer is - everyone is beating everyone.

Every side in the 13-team mix for the drop has won either 12, 11 or 10 matches. In each of the other top three divisions in England there is at least a team or two who have been the whipping boys.

Recent form is also a big factor. AFC Wimbledon, who could not win a game in the early part of the season have flown since Christmas, while Plymouth were bottom in October with just one victory.

The Dons' famous FA Cup win over Premier League West Ham in January kick-started their season and they have gone from rock bottom to three points from safety. Wally Downes' side have the joint-best form of any team in the division over the past seven games.

Going in the other direction are Rochdale. Dale have gone from being nine points and five places above the relegation zone on Boxing Day to second from bottom thanks to nine losses in 13 games. 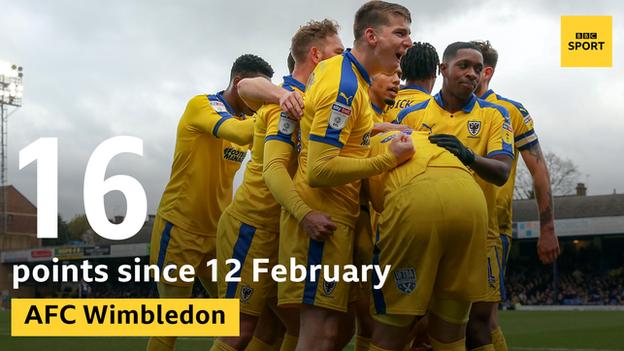 "It's all seemed to have concertinaed in the last two weeks," Wimbledon boss Downes told BBC Radio London.

"We got seven points in a week just after Christmas, an away win, a home win and a 0-0 at home. Two clean sheets, seven points and we went to the bottom of the league as all the teams around us had won - what more could we do?

"But teams at the bottom of the league aren't immediately going to turn into promotion-winning sides. Teams were having a good streak around us and it was a case of us just digging in, getting points where we could, knowing that as we improved at some stage we would get our run as long as we worked hard and pulled together."

Oxford United boss Karl Robinson has seen his fair share of ups and downs, having led MK Dons into the Championship in 2015 before a 16-month spell as Charlton Athletic manager.

"It's probably one of the most unique finishes to the last eight games of the season within the EFL," he told BBC Radio Oxford.

"It's a dogfight among a lot of teams.

"We're one of those teams and we've got to make sure that it's not us that drops below that line. We're one of many that can get out of it, but can also get dragged into it."

Walsall manager Dean Keates knows his side have a chance to move from 21st to 13th when they host promotion-chasers Barnsley in the noon kick-off at the Bescot, but feels League One is effectively two divisions in one.

"The way we're looking at it, we've got an opportunity, as we kick off early, that by the time we finish our game we could be sat 13th in the table.

"We've got an opportunity to affect the table before anyone else can and come two o'clock, all being well, we'll be sat where we want to be."

'Every game's a cup final now'

So how do you approach such a nail biting run-in?

"It's about staying calm and not getting too carried away with the situation," says Oxford's Robinson - whose side jumped out of the bottom four last Saturday by beating Bradford City, who went bottom.

"You've got to make sure the players play with a freedom and express themselves, but equally be just as well organised."

For Gillingham manager Steve Lovell this unprecedented end to a season begins with a fixture against form side AFC Wimbledon at Kingsmeadow.

"A lot of the teams down the bottom are playing against each other between now and the end of the season," he told BBC Radio Kent.

"One more point and we could go 12th - it's ridiculous. It's all about taking a game as it comes and Saturday is a big one for both teams, so it's important that we do our best to get maximum points."

Meanwhile Downes was in no doubt about how important the run-in is for his AFC Wimbledon side. "Every game's a cup final now, every game's a must-win game," the 57-year-old added.

"There's no point in going out and being cagey and trying to nick a draw because those days are gone, we're in a position now where wins are paramount."

If you think League One is tight right now, it still has some way to go to match the old Second Division (what is now the Championship) at the end of the 1977-78 season. Even going into the final round of games, any one of eight teams could have been relegated.

However, 41 years ago there was no 'final day' of the season, as postponements meant the last few games were stretched out beyond the final Saturday of fixtures.

It was Blackpool who eventually went down with 37 points - one fewer than the seven teams above them. Leyton Orient's 1-0 win at Cardiff on the Tuesday after the final weekend saw them get to the magic 38-point mark.

Could this year's drama yet match that? Get your calculators ready.