Fans celebrating goals are being turned into criminals because of a "narrative that all football fans are scum, thugs", a supporters' group says.

The Football Supporters' Federation is calling for a "real world response" to fans going on to the pitch rather than "a moral panic".

But a stewards' association spokesman said the deterrent of a criminal charge for going on to a pitch was needed.

Seven men were arrested after fans spilled on to the pitch following Newcastle United's late equaliser at Bournemouth on Saturday and five men have been charged.

Going on to the playing area at a football match is an arrestable offence under the Football (Offences) Act 1991.

Police said a female steward was injured during the encroachment, and four of the men are under investigation for allegedly assaulting her.

All five suspects are due to appear before Poole magistrates on 2 April, charged with going on to the playing area at a football match.

A 14-year-old boy from Bournemouth who was arrested was released under investigation, while an 18-year-old Durham man was released without charge.

Jacks has spoken to the mother of one of those arrested who she says was "released without charge because CCTV clearly showed a steward pulling him over a barrier and on to the pitch".

She added: "The young man was held for approximately 20 hours." 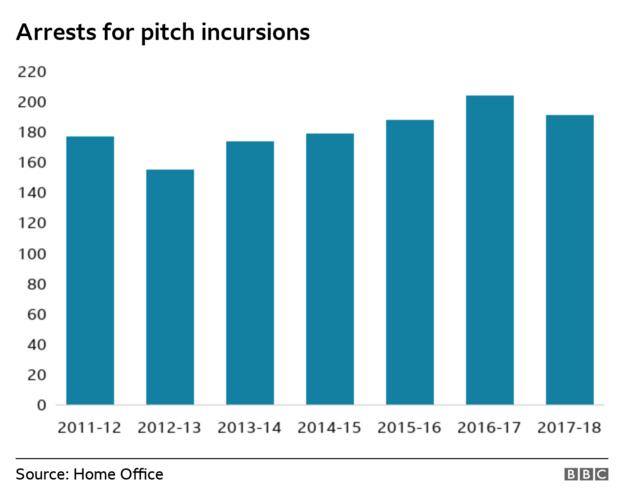 However, the incidents at Bournemouth and Swansea came a week after a Birmingham City fan ran on to the pitch and hit Aston Villa midfielder Jack Grealish.

"I am categorically not condoning fans going on the pitch or saying they should do it, rather looking at a real world response to it rather than a moral panic," said Jacks.

"The Newcastle fans going on to the pitch was clearly very different to the Grealish incident.

"We are seeing people criminalised for going on the pitch, celebrating for 30 seconds and all of a sudden they have got a criminal record which could be prejudicial for their futures.

"Is it in the public interest? Not only are you putting a fan in the dock and criminalising them for doing something in a football context, there is every chance you are taking a police officer for a day to sit around a court room to give evidence."

She added: "I think it is an issue for the safety authorities and not necessarily the criminal justice system.

"It is important that stewards understand football fans, fan behaviour and crowd psychology.

"We see players run into the crowd and the people in the yellow jackets run over and pull the players out and push the fans back.

"I watch and think 'you have no idea what you are doing'. Why not stand back and give it 30 seconds and the crowd will sort itself out?"

What is the view of stewards?

John Newsham, a consultant chief executive officer at the FSOA, says stewards are "trained to use common sense", but that there needs to be a deterrent to stop fans entering the field of play.

"It's far too easy for the FSF and others to blame stewarding and police when things happen," he said.

"Stewards are trained to use common sense. If they could see the fans had to go on to the pitch for whatever reason they would deal with it appropriately."