Roberto Firmino set up Liverpool's first goal in Sunday's win over Fulham but he has only scored himself in one of his past nine matches for the Reds.

I know what an important and unselfish role the Brazilian has in Jurgen Klopp's side but his team needs to increase their all-round attacking threat and as part of that I would like to see him getting in the box more.

I want to see Firmino demanding more chances from his team-mates, because at the moment he does not get enough.

We know what a good finisher he is when he gets an opportunity in front of goal, and what I really like about him is that he is so calm in those situations.

When the chance comes, he sees the picture so he is in the right place - and he can execute it too.

The first bit is the easy part, but then you need composure to find the net. Not a lot of players have it, but Firmino does, and his goals could play a vital part in the title race.

'A link-man who leads Liverpool's press'

Whether he is leading the line in a 4-3-3 formation or in a deeper role behind the main striker in a 4-2-3-1 shape, Firmino does so much good work for his team.

While Mohamed Salah and Sadio Mane are dangerous when they are running at defences, he is more of a link-man - it is through him that Liverpool can start playing in the opposition's half and look for gaps in their defence.

When that doesn't happen, he still does his defensive work off the ball and, if he is up top, he is the player who always starts the press.

When he doesn't play, they miss him significantly because they don't have another player who can carry out those roles for the team.

What they are not getting enough of from him at the moment is goals. As a former striker myself, I want to see him getting in the box more to finish things like I know he can.

The fact he plays deeper, particularly when Salah has been playing as the central striker, obviously makes that more difficult.

It leaves him a greater distance to run to attack the box and it must be tiring too, but he needs to find the right moments to get into those areas more often, and have an even greater effect on matches.

'What strikers need is a selfish streak'

Earlier this season, Firmino's team-mate Fabinho described him as a number nine who can play as if he is in number eight role, not just as a number 10 - which shows how deep into midfield he goes at times.

I can certainly see him in those different positions. He can play as a number eight because he has got the stamina and aerobic capacity to be an effective central midfielder and cover a lot of ground.

As a number 10, operating behind the main striker, you have to be the most unselfish player in the team. It is probably the most important job in helping the whole attack function correctly, but you have to think of others before yourself.

There are similar aspects of the number nine role too, like holding the ball up and bringing other people into play, and of course Firmino does all of that extremely well too.

But what you also need as a traditional striker is a selfish streak. When I played, I always wanted to score goals and I would love to play in this Liverpool side because they create so many opportunities.

Salah is struggling for goals too, but Mane is making up for that with 11 goals from his past 11 games, and he is on fire right now.

At the moment Liverpool do not have a big problem, but if Mane stops scoring they could have because they rely so heavily on their front three.

Their centre-halves do not contribute enough from set-pieces despite being very good in the air, and their midfielders also need to score more goals.

'The Champions League could cost Liverpool the title' 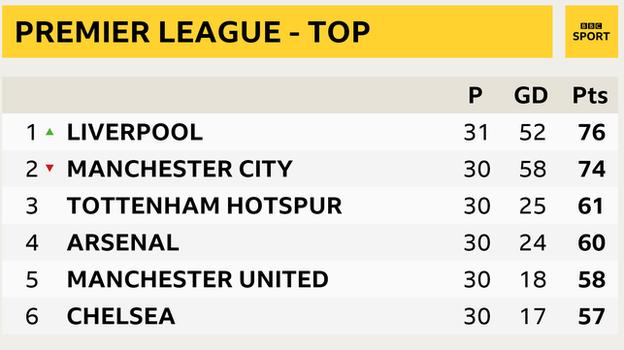 With less than two months of the season to go, Liverpool are back above Manchester City following Sunday's win over Fulham.

I thought the gap at the top of the table would be smaller than it was last season when City finished 19 points clear, but I did not expect Liverpool to be in this position. They have done exceptionally well.

After using so much energy in Wednesday's win over Bayern Munich - mentally, not physically because that game was more mentally draining than physically tiring - playing a team like Fulham was perfect for them.

They still had to work to get the three points, though. It was not a perfect performance but they left with the win, and it is a big positive that they found a way to do that even though they did not play well.

I definitely think Liverpool are maturing as a team and getting closer to City, but I still don't see them winning the title.

When I look at City's run-in, I can see them staying unbeaten and even going to Old Trafford and beating Manchester United if they have to.

The big thing that could cost Liverpool is the Champions League.

The longer they are in Europe, the more I think they are likely to drop Premier League points.

At full strength, when you compare their strongest XI to City's, there is not much between them, but Klopp's bench is simply not as strong as City's.

Liverpool will have injuries or even just fatigue to deal with in the final few weeks of the season and for me, that is when they might just fall short.