Liverpool moved back to the top of the Premier League on a weekend where Manchester City required a late comeback to secure a place in the FA Cup semi-finals.

Brighton, Watford and Wolves also made it through to the last four, while in the Premier League bottom-of-the-table Huddersfield let a two-goal lead slip against West Ham.

There was also a late victory for 10-man Leicester at Burnley and a hard-fought draw for Newcastle in their dramatic match with Bournemouth. Meanwhile, Maurizio Sarri's woes continued as Chelsea suffered a 2-0 defeat at Everton.

There were some great performances in the Premier League and the FA Cup but here is my combined Team of the Week. 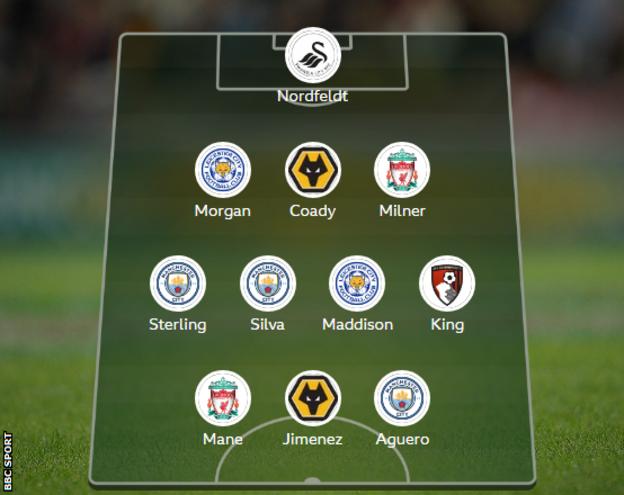 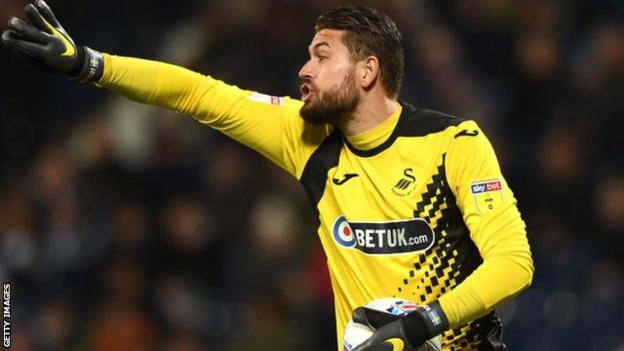 I don't think I have ever seen a performance like this from a goalkeeper to still end on the losing side. Swansea's Nordfeldt was absolutely brilliant against Manchester City as double saves with hands and feet kept the visitors at bay until they brought on Raheem Sterling and Sergio Aguero. It needed something a bit special from both players and even then the decisions by the officials were dubious. A wonderful performance by the Swedish international.

Did you know? Nordfeldt made six saves in his side's narrow defeat by Manchester City, only five other keepers have made more against Man City in a match in all competitions this season. 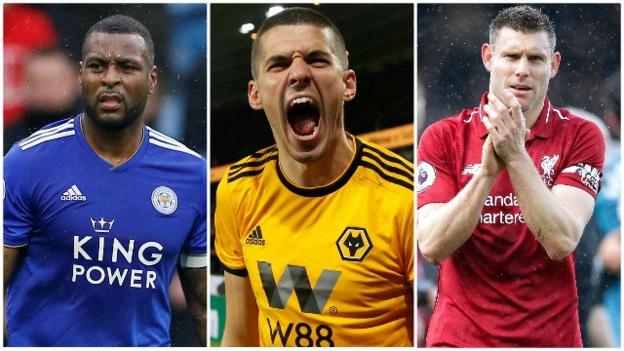 Wes Morgan: If I select a substitute for my TOTW, I can guarantee you that the player has had an extraordinary impact on the game. Well, Wes Morgan had that sort of impact for 10-man Leicester against Burnley. When the club captain entered the fray he won the crucial headers and made the vital interceptions and then popped up to clinch the winner. When your team-mates clap you into the dressing room after the game that's when you know you've done something special.

Did you know? In addition to scoring the winning goal for Leicester, Morgan made eight clearances against Burnley.

Conor Coady: It's been a long time since Wolves were in the semi-final of the FA Cup. However Coady had to give special attention to Marcus Rashford in order to do it. The Wolves captain took a booking for the team in the 86th minute with Rashford bearing down on his goal with the England striker looking to put his team back in the tie. Good call Conor. Life is nothing without good timing.

Did you know? No Wolves player made more interceptions (3) or more clearances (2) than Coady in their FA Cup win over Man Utd.

James Milner: Here is another substitute that makes my TOTW. There is no doubt about it, Liverpool are not firing on all cylinders but they can call on certain players in a crisis and James Milner is one of those players. His introduction into the game minutes before the award of the spot kick was crucial. They were gifted a penalty and the one player unmoved by completing the task was Milner. It puts them top of the table prior to the international break and now Jurgen Klopp must hold his breath and pray his players return unharmed.

Did you know? Milner has scored in 51 Premier League games without ever ending on the losing side (W40 D11), the most by a player in the competition. 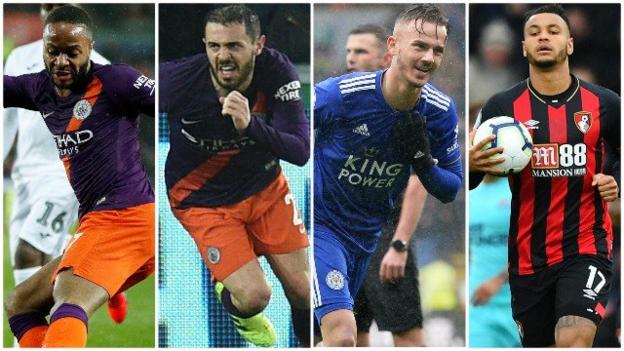 Raheem Sterling: No comeback is complete these days without the involvement of Raheem Sterling. The England forward is unplayable at the moment. There will be plenty of people who will dispute the penalty awarded by Andre Marriner (me included) but what they must accept is Sterling's directness and his ability to commit defenders in the box is undeniable. Sterling has become a game changer and the catalyst of keeping City's dream of the quadruple alive.

Did you know? Despite coming on as a second-half substitute when his side was two goals down, only two Man City players had more shots than Sterling.

Bernardo Silva: What a performance by Bernardo Silva. With only 30 minutes to play, Manchester City looked to be out of the FA Cup but with a superb finish, and one hell of a cross from Silva, the game turned and Swansea were out. This was a game Manchester City should have lost and didn't - read why in the Crooks of the Matter below.

Did you know? Silva both scored and assisted in the same match for Manchester City for just the second time since joining the club. Both occasions were in Wales, the previous time coming against Cardiff back in September.

James Maddison: I don't know what motivated James Maddison to take off his shirt after scoring a magnificent free-kick to equalise against Burnley but, whatever it was, it worked. These moments that cause players to reveal a message on their undershirt are often very personal and quite emotional for them. Perhaps it is time referees exercised a little restraint and not automatically book them but issue a warning. A little compassion on these special occasions would not go a miss.

Did you know? No Leicester player had more shots (two) or created more chances (three) than Maddison against Burnley.

Joshua King: When I first clasped eyes on this lad I thought he had a lot of work to do in order to have an impact on the Premier League. I must say, from what I can see, Josh King has worked extremely hard to become a regular first-team player at Bournemouth. His performance against Newcastle was the latest indication of how the Norwegian international has come to terms with the demands of the league. Cool under pressure with an eye for goal.

Did you know? King scored both of Bournemouth's goals in their 2-2 draw at home to Newcastle, taking his Premier League goal tally to 11 for the season. 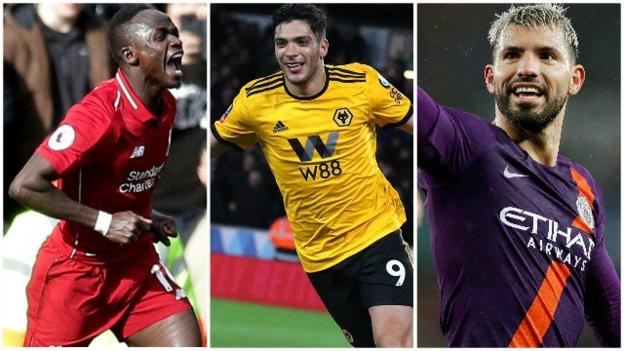 Raul Jimenez: What a season this lad is having for Wolves. The club are currently seventh in the Premier League table and in the semi-final of the FA Cup. You would have to go back to Andy Gray and John Richards to have seen days like these. Jimenez is clearly in that class, scoring goals and creating mayhem for the opposition has been the name of his game. The big test for Wolves now is can they keep him or their outstanding manager.

Did you know? Jimenez has scored 15 goals in all competitions this season, at least eight more than any other Wolves player.

Sadio Mane: He ran the show in the first half and hit the bar in the second. With Roberto Firmino never quite at the party and Mohamed Salah struggling to hit the back of the net it was left to Sadio Mane to provide the inspiration. Liverpool got away with this 2-1 away win. It was a spirited performance by the Cottagers and only a mistake by Fulham goalkeeper Sergio Rico let the Reds back into the game. I remember the days when goalkeepers could catch a ball.

Sergio Aguero: This game was a travesty. The services of Sergio Aguero had to be called upon pronto and immediately the Argentine scored two goals and put Swansea out of the FA Cup. His first goal wasn't a penalty and his second was offside so why have I selected him for my TOTW? That's because neither incident was his fault. He just administered the pain.

Did you know? Aguero emerged as a second-half substitute to have the most shots of any player in the match (five) as well as scoring the winning goal.

What is the Football Association doing with the greatest knockout competition in the world? They are making a total mockery of the competition not to mention causing total confusion. Manchester City survived what would have been the biggest cup upset of the round if VAR had been used and fair play had been administered throughout the competition. But the Liberty Stadium is not a Premier League ground so VAR was not installed for the cup tie. What nonsense.

Manchester City won the match against Swansea with two goals that would have almost certainly been disallowed had VAR been allowed to play its part. The game can cope with the luck of the draw, which is part of the custom and practice of the competition, but what it cannot cope with is selectiveness. If the FA Cup rules are not fair and equitable for all its participants it is no competition at all. 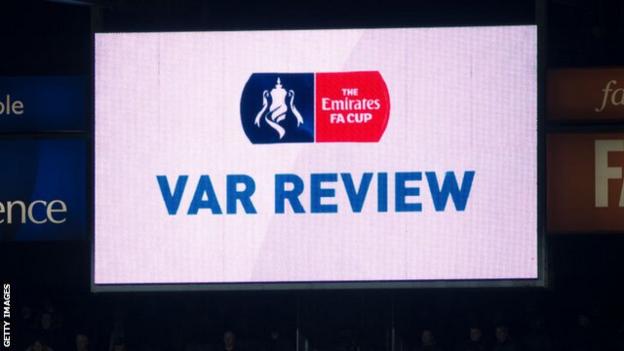