The Premier League, English Football League and Football Association have been accused of "double standards" for not holding tributes for 50 people killed in New Zealand's mosque attacks.

Six Nations and rugby league games held silences this weekend but English top flight and FA Cup games did not.

When tributes were held in 2015, Premier League chief Richard Scudamore said it was an act of "solidarity and remembrance" following the attacks in the French capital, in which 130 people died.

Lunat told BBC Sport: "There is no excuse, whenever something has happened, not even on the same scale, football has always come out and paid tribute.

"It is double standards and hypocrisy. To hold a minute's silence was the right thing to do. When it happens for the events, it has to happen across the board for every attack."

The fatal shooting at two mosques in Christchurch on Friday killed 50 people and left a further 48 wounded.

When asked for a comment by BBC Sport, the Premier League pointed to their tweet on Friday, which said their "thoughts were with those affected by the terrible events".

It is understood the English Football League allowed clubs to exercise their own discretion as to whether they paid their own tributes.

The attacks in Paris on the night of 13 November 2015 by gunmen and suicide bombers hit a concert hall, a major stadium, restaurants and bars almost simultaneously - and left 130 people dead and hundreds wounded.

France's game with Germany at the Stade de France was targeted in the attacks, when three suicide bombers detonated their devices outside the ground.

The following Tuesday, a friendly between England and France went ahead with tributes.

After the Nice attacks in July 2016, in which 86 people died and more than 300 were injured when a lorry ploughed into a large crowd marking Bastille Day, Wembley Stadium lit its arch in the Tricolour and tweeted to say "we show our solidarity with the people of France".

Watford, Swansea, Wolves and Millwall were all at home for their FA Cup quarter-final ties this weekend, with the FA telling BBC Sport "it is up to the clubs if they want to hold a silence or not. We would support them if they did".

A minute's applause was held at Craven Cottage before Fulham's game against Liverpool on Sunday, although this was in memory of a Fulham employee who passed away last month.

Employment lawyer Lunat said: "The reason this happens is because there are a lack of role models and senior ethnic executives that can identify this sort of thing. 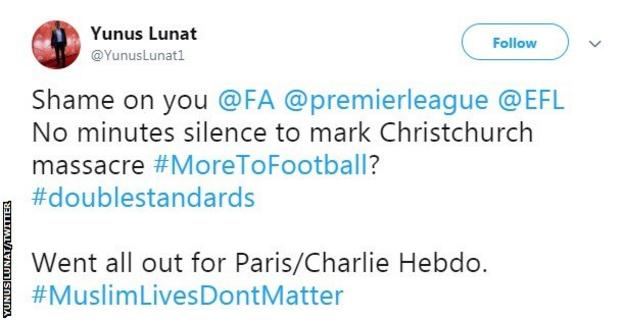 "There is a lack of Muslims in leadership roles in sport, particularly football, despite those applying being competent enough for roles.

"The FA Cup is the FA's competition. It shows a lack of leadership and it is a cop out.

"This was a missed opportunity to make a huge statement about what is happening around the world.

"This was a perfect opportunity for the chance to stand up and be counted. Fulham had a tribute but it could not be extended to what happened in New Zealand."