Scotland boss Alex McLeish was booed as his side laboured to a Euro 2020 qualifying win over minnows San Marino.

The Scots were unconvincing even in victory against the worst international side in the world.

Kenny McLean and Johnny Russell scored their first international goals, but an expected avalanche of strikes did not arrive.

The win does at least give Scotland their first win of Group I following the 3-0 loss to Kazakhstan on Thursday.

But question marks will still remain over McLeish's future ahead of June's double header with Cyprus and Belgium.

And the Tartan Army made their feelings clear, also chanting "sack the board" at Scottish FA officials.

Win not enough to satisfy fans

McLeish's image was projected on to a big screen before the teams took to the pitch, prompting boos from the travelling Scotland support.

The shockwaves from the Kazakhstan result were still evident, and were not eased by Russia winning 4-0 at the same venue earlier in the day to emphasise how poorly Scotland had performed.

McLeish's men needed a quick goal to give their fans something else to focus on. McLean stooped low to get to Ryan Fraser's cross to head in his first international goal to provide it.

But it was brief respite from the dark clouds over the national side at the moment, as from then on Scotland stuttered against the side ranked 211th in the world.

Stuart Armstrong was twice denied by home goalkeeper Elia Benedettini - the second of which was a fine save low down - but little else threatened the San Marino goal.

Callum Paterson, deployed as a forward despite three recognised strikers on the bench, hobbled off before half-time, but it made little difference in front of goal.

Passes went astray, crosses failed to find a yellow shirt, and on more than one occasion the hosts raced forward on the counter-attack and threatened to do the unthinkable and level.

There were 70 minutes between the first and second goals, and it came on the break with San Marino caught up field on the attack.

James Forrest drove the ball across to Marc McNulty, with the Hibs man dummying it to open up space for Russell, who moved back on to his right foot and hit through the middle of the goal.

Forrest then picked out McNulty again, who this time took the chance on but put what looked a simple header wide.

Forrest's introduction on 71 minutes had begun to give Scotland more drive and energy down the right hand side, but it was still a lacklustre end, with the three points unlikely to be enough to settle an agitated Scotland support. 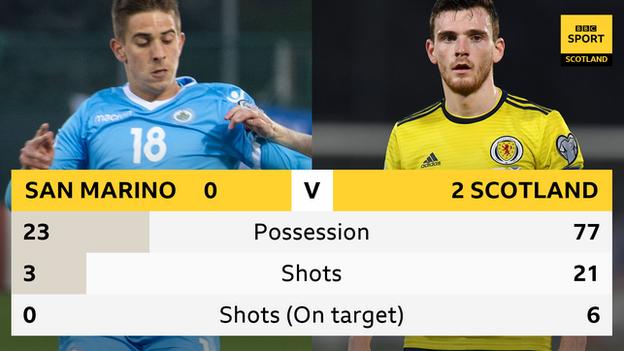 It was a win, but not without some scary moments. A team with six changes to the starting line-up that were thumped in Kazakhstan should have been good enough to record a more convincing victory against a team who are officially the worst in international football.

Around 4,000 of the Tartan Army made their way to San Marino and around 300 of those had also been in Kazakhstan and they were looking for a response. They were not impressed.

The longer the game went on the more tense the atmosphere became. With calls of "You're getting sacked in the morning" heading in the direction of boss McLeish.

However, the mood lightened when Russell scored the second and the nerves eased, but overall it was a performance that lacked pace and drive against players who tomorrow will be back working in their factories and driving their taxis.

Questions will undoubtedly be asked about the preparations and the performances.

The biggest question though is will McLeish remain in charge for these June qualifiers.