Real Madrid might boast one of the most star-studded squads in the world, but only one man has been the centre of attention in the last few days: Zinedine Zidane.

The charismatic French coach returned to the club after nine months away - which feels more like nine years considering everything that has happened in the meantime - for Saturday's home meeting with Celta Vigo.

And Zidane's first game back on the Bernabeu bench, which resulted in a 2-0 victory over the relegation-threatened Galicians, certainly didn't lack talking points… so let's review a busy day for a Real icon.

The general mood surrounding Zidane's return was captured by Saturday's front page of sports newspaper Marca, featuring a picture of Zidane stepping onto the touchline with a headline loosely translated as: "Can't wait to see you."

After his stunning exploits as both a player and manager, Zidane's status as a club legend is secured for life and his reappointment was always bound to be warmly welcomed, especially at such a desperate time in the wake of three home defeats and two cup exits in the space of a week.

However, it would be easy to overstate the level of euphoria surrounding his return among a group of supporters who are, on the whole, pretty sceptical about the prospects for their team and don't believe the return of Zidane - who was regularly criticised during his last season in charge - will automatically solve everything.

For all the trophies that he won, Zidane has never been able to shrug off the suspicion that, although his man-managerial skills are undoubtedly second to none, his tactical abilities as a coach are limited. 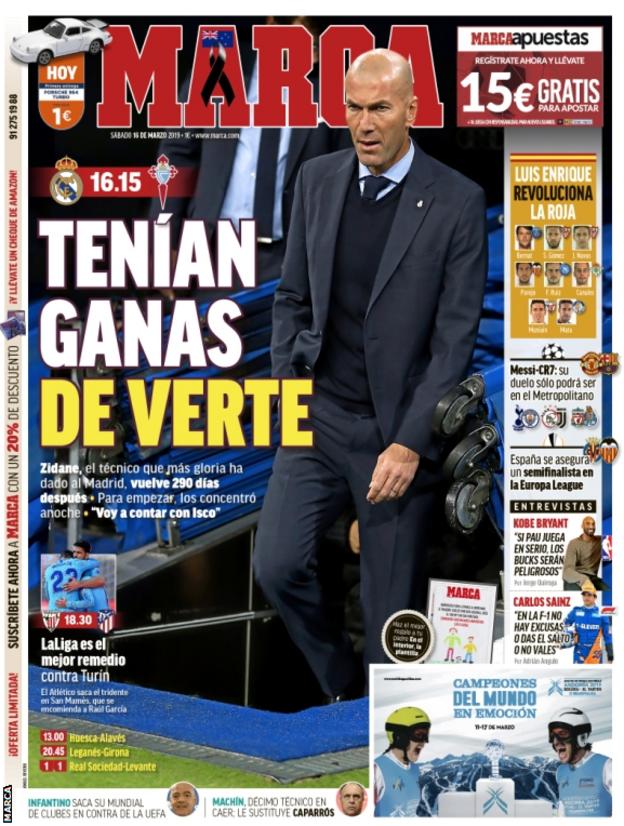 That attitude was expressed again this week when a poll by newspaper AS saw 55% of respondents say the players were responsible for the team's three consecutive Champions League victories, while 36% voted for Cristiano Ronaldo as the main factor and only nine percent believed the trophies were mainly down to Zidane.

The "we love him, but…" sentiment was reflected in Zidane's low-key entrance for Saturday's game. There was no passionate badge-kissing or even a real hero's welcome, with the new/old boss, instead he casually wandered out of the tunnel a couple of minutes before kick-off and, heading straight to the bench, received a warm round of applause but not exactly a standing ovation.

The hard-core 'ultras' behind one of the goals launched into a chant for their manager ('Hey Jude' by the Beatles, with 'Zizou' as the chorus refrain), but just as noticeable were the swathes of empty seats around the stadium (the attendance was 65,054, a few hundred above this season's average league gate).

All in all, then, Zidane's return has prompted cautious optimism, but the issues which led to his departure - and which have dogged the team ever since - have not simply been swept under his magic carpet.

Bale back in favour?

Zidane's reappointment was widely interpreted as bad news for Gareth Bale, who suffered a deteriorating relationship with the coach during the Frenchman's previous spell in charge and recently admitted he was angry to be omitted from the starting line-up for the Champions League final, Zidane's last game in charge.

This has been another frustrating season for Bale, who was repeatedly overlooked in favour of rising star Vinicius Junior and workmanlike Lucas Vazquez by previous boss Solari, and he has consequently been heavily linked with a summer departure from Madrid.

However, Zidane defied the predictions his return spelt doom for Bale by naming the Welshman in his team to face Celta, giving the winger a chance to live up to his agent's claims that he wants to stay at the Bernabeu for the rest of his career.

And to Bale's credit, he produced a very bright display, looking sharp, committed and eager to make a good "first" impression on his former, and now current, coach.

Bale was unlucky not to open the scoring after half an hour with a powerful volley that crashed against the crossbar, and he continued to regularly threaten before finally grabbing a deserved goal with a low right-footed shot inside the final 15 minutes - his first goal at the Bernabeu since September.

It should be noted that Zidane's hand was forced to a significant extent by five absentees, including injured wingers Vinicius and Vazquez. In the circumstances, he would have been hard pushed not to pick Bale, and selecting him for this game does not necessarily mean he intends to persist with him in the future.

However, Bale certainly could not have done much more to impress on this occasion. The longer-term prospects remain uncertain, but for now his rollercoaster life at Real Madrid appears to have taken an upward turn.

Zidane goes back to the future?

Bale's inclusion on the teamsheet was by no means the only name to raise a few eyebrows, because Zidane went back to his tried and trusted old favourites by also selecting Keylor Navas, Marcelo, Isco and Marco Asensio - all of whom rarely featured under previous boss Solari.

Isco's recall was particularly notable. He often failed to even make the bench under Solari, who jabbed a few thinly-veiled criticisms at the midfielder's workrate and fitness levels, but with Zidane back in charge he returned straight into the starting line-up for the first time since January.

Like Bale, Isco responded to his recall in the perfect manner by getting his name on the scoresheet, sidefooting home the opening goal from close range after a precise cross from Karim Benzema.

The other returnees also caught the eye. Asensio nearly scored with a long-range thunderbolt and made a great run and pass in the build-up to Isco's opener, Marcelo did likewise to tee up Bale's goal, and Navas produced a superb save to keep out a first-half header from Celta striker Maxi Gomez.

So Zidane appears to be ready to give his old guard every chance to regain their former status - and that could spell bad news in particular for former Chelsea goalkeeper Thibaut Courtois, dropped to the bench as Navas made only his second league appearance since August.

The new boss also showed he is not one to hold a grudge, introducing Dani Ceballos from the bench even though the midfielder spoke out publicly against Zidane in September and said he would have left last summer if the Frenchman had stayed.

Zidane's intentions for the future are unclear, especially when he recovers Saturday's absentees (Vinicius, Vazquez, Casemiro, Dani Carvajal and Marcos Llorente), but on the evidence of his first game, he appears inclined to place his trust in the same players who served him in the past.

Saturday's victory in his second debut should not be interpreted as a sign Zidane will automatically return Real to winning ways and banish the problems that have plagued them all season.

For starters, he was fortunate to come up against a Celta team bereft of confidence after an awful run of just four points in 11 games since key man Iago Aspas suffered injury in December - and even then the visitors held their own during the first half, regularly threatening to take the lead.

It should also not be forgotten that his last spell - although it delivered three consecutive Champions League trophies - was not exactly an unqualified success, with Real finishing last season 17 points behind Barcelona in third place.

Of course, the team has also lost a rather significant force since then, and a major focus this summer will be attempting to replace the goals that left the Bernabeu with the departure of Ronaldo to Juventus.

Paris St-Germain pair Kylian Mbappe and Neymar are thought to be top-priority targets, with club president Florentino Perez jokingly (perhaps) responding when he was asked this week which of the duo he prefers by firing back: "Both!"

Whoever plays, though, the shape and structure of the team needs a lot of work - as evidenced again during the first half of Saturday's victory over Celta.

Real's current all-round picture is reflected fairly accurately by the fact they have lost 14 games in all competitions this season, including eight in La Liga. Turning that record around will be Zidane's biggest test yet…but at least he avoided a crisis in his first game in charge.