They hadn't even publicly confirmed they were an item, but two of the USA's 2015 Women's World Cup-winning squad have announced they are engaged.

Orlando Pride's Ali Krieger and Ashlyn Harris began dating nearly a decade ago when they met playing for the national side.

"We always sat next to each other on the bus and on flights and... the rest has kind have been history," Harris told US magazine People.

The couple kept their relationship quiet "so as not to be a distraction to our team-mates and the franchise".

"We wanted to be professional and make sure that we showed up every day and did our job and it wasn't just because we were together, it was because we love what we do and we're really good at what we do," Krieger said.

"Here we are nine years later, and we're going to be getting married this year."

Orlando Pride fans, who have long suspected the couple's relationship, coined a nickname for the couple, calling them: 'Krashlyn'.

Of course, they are waiting until after this summer's World Cup in France to tie the knot.

Defender Krieger, 34, made 98 appearances for the US national side and was named on the Fifa Fifpro World XI in 2016.

Harris, 33 is the long-time reserve goalkeeper behind Hope Solo on the national side and has been capped 20 times. 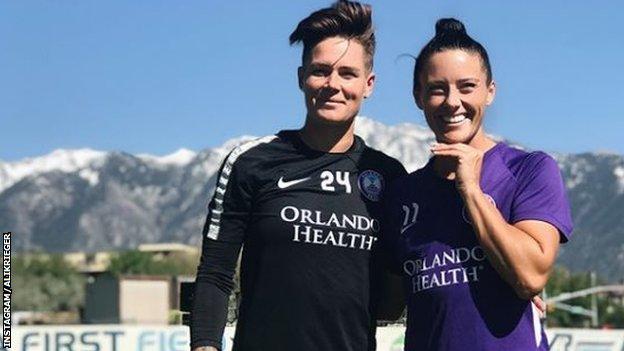