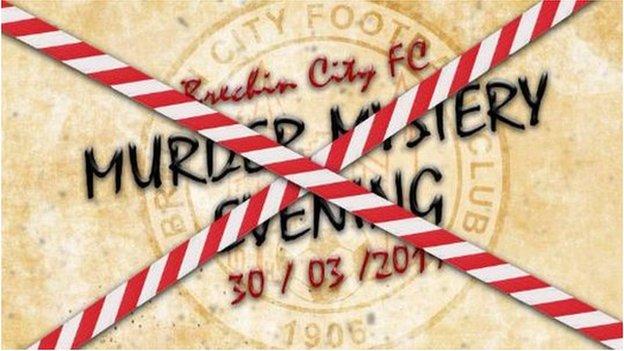 Brechin City have had to cancel a Murder Mystery Evening as a "direct result of a lack of interest".

The night, scheduled for Saturday, 30 March, "failed to generate enthusiasm locally", according to the Scottish League One strugglers.

Brechin say the format previously sold out at Sheffield Wednesday, Wolves, and Bristol Rovers, as well as Hibernian, Dundee and Airdrie.

"We originally chose to host this event as it was novel, new to the club, and had been successful elsewhere," read a club statement.

"The level of ticket sales made the cancellation decision a formality. Unfortunately we'll have to absorb the costs already incurred, but that reflects the risk associated with trying out new ideas."

Launching the event last month, the club invited "the fine people of Brechin and beyond" to attend "an evening full of intrigue and suspicion".

Seven actors had been lined up to play "prominent characters around the club and play out a drama at a fictional end-of-season awards dinner".

Guests - paying £25 each, including a buffet meal - were to have the chance to "interrogate the suspects, examine the evidence, and ultimately guess the murderer".

The winner of the "fully interactive event" would have received a "Star Detective certificate and a special prize" before "disco music" to conclude the evening.