Hapless Scotland suffered one of the most abject defeats in their history in their first Euro 2020 qualifier against Kazakhstan, ranked 117 in the world.

Alex McLeish's callow side were two down inside 10 minutes in Astana after dreadful defending allowed Yuriy Pertsukh and Yan Vorogovskiy to score.

The Kazakhs had only won one of their past 20 qualifiers, but the feeble Scots were unable to trouble them.

And Baktiyor Zainutdinov's header just after the break completed the rout.

Stuart Armstrong was denied by a stunning Dmytro Nepohodov save but it would barely have even counted as consolation, so ignominious was the performance.

This - a second defeat in 11 competitive matches - is a grievous blow to Scotland's hopes of automatic qualification for next year's finals, even before Sunday's second game of the campaign in San Marino.

McLeish's side had previously secured a place in the play-offs for a tournament which they will part host by winning their Nations League section.

'Scots second best in every department'

The match looked to be settling down after a fairly quiet opening five minutes, but there was to be a very rude awakening for the untried Scotland defence.

Alexander Merkel was allowed far too long to pick a simple ball over the top and, with David Bates and Scott McKenna napping, midfielder Pertsukh had yards of space and ample time to pick his spot high into the net beyond Scott Bain.

You would have thought that alone would have given the Scotland players a shake but after more slackness, the hosts scored their second four minutes later. Kazakh captain Islambek Kuat strode forward and played an inch-perfect pass between the Aberdeen defenders McKenna and Graeme Shinnie and Vorogovskiy slid the ball home with Bain helpless.

As the home crowd roared at every pass, the Tartan Army watched on in stunned silence fearing their dreams of automatically qualifying for next year's Euros were shot just 10 minutes into the campaign.

Oliver Burke made a couple of dashes into the box but was let down by his final ball as the Scots tried to claw their way back into the game.

Kazakhstan are ranked 67 places below Scotland but the confidence was oozing from the hosts as they controlled the pace of the game. Indeed, only a wonderful safe from Bain denied them a third before the break after a thunderbolt by Kuat looked certain to find the target.

Scotland were second best in every department and allowed Kazakhstan the luxury of time on the ball and an ease of possession that you rarely see at international level.

James Forrest was the Scotland hero in the Nations League - and had scored five in his last two caps - but whenever the Celtic winger got the ball he was surrounded by home defenders.

As the Serbian referee blew the whistle for half-time, McLeish will already have know the knives were being sharpened. Surprisingly, though, there were no changes at the break although the formation was tweaked slightly with Forrest now playing in a more central role with Burke and McBurnie providing the width in a three-man strike force.

But any hopes of a comeback were soon put to bed when Kazakhstan scored a third. A deep cross by Gafurzhan Suyumbayev was met by the head of Zainutdinov, who had climbed above McKenna to nod across Bain and into the far corner.

Armstrong came close to pulling one back but there was little change to the flow of the game as the Kazakhs completely overran the Scots. Johnny Russell replaced the ineffective Oli McBurnie and Scott McTominay came on for John McGinn but a lack of awareness in defence was clear and there was little creativity coming from the midfield.

The full-time whistle ended the agony for the Scotland players and the Tartan Army in the crowd of 27,641 inside the Astana Arena, with manager McLeish left with lots of questions to answer.

It was extremely dispiriting. The players didn't know where to look. There will be a lot of pressure on the manager after this. The players looked completely lost. It didn't look as if there was a clear idea of what they were trying to do. We were out-fought in the middle of the park, over-run in the final third, and up top we looked toothless.

Kazakhstan have no history of winning games and it's an embarrassing performance by Scotland. The players looked leggy and disinterested in the second half. The three goals we lost, you can't give them away against any team. Alex McLeish will know that and can't defend that performance. 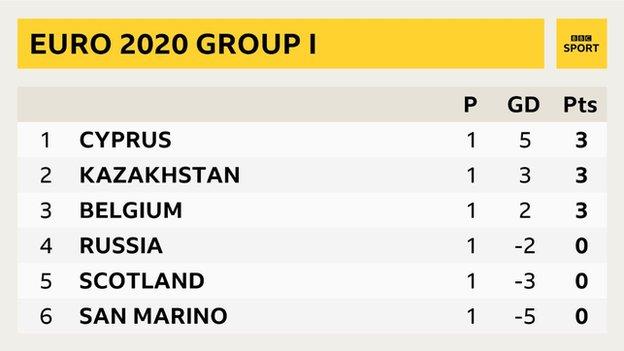