Cristiano Ronaldo was signed to win Juventus the Champions League - and he might yet do just that.

The Portuguese produced his latest masterclass in Europe's elite competition to bring the Italian side back from the brink of a last-16 exit against Atletico Madrid and book their place in the quarter-finals.

Trailing 2-0 from the first leg in Spain, Ronaldo was facing up to the prospect of failing to reach at least the semi-finals for the first time since 2010 - and only the second time in 12 seasons.

But then this happened...

His latest extraordinary performance means that:

'This is why they brought me here'

Ronaldo joined Juventus from Real Madrid last summer in a £99.2m deal, becoming one of the most expensive players of all time in the process.

His remit was, in large part, to help the Turin club win the Champions League.

"This was why Juventus brought me here, to help do things that they have never done before," said Ronaldo, who has now scored 18 goals in his past 14 Champions League knockout appearances and has been directly involved in 76 goals in 77 knockout matches (62 goals, 14 assists).

"It was always going to be a special night and it was - not only for the goals but for the team.

"This is the mentality you need to win in the Champions League. We enjoyed a magical night. Atletico were a difficult team but we were strong too. We will see what will happen."

Rio Ferdinand, a team-mate of Ronaldo's during their time together at Manchester United, told BT Sport: "Cristiano is a living football god and it is ridiculous what he is doing.

"In the Champions League he has got every record you can imagine. And it was also against an Atletico team that is renowned for having a great defence."

Have Juve finally worked out how to use Ronaldo?

The 2015 and 2017 finalists signed the Real Madrid legend in a bid to help them go one step further in Europe and win a trophy they last lifted in 1996.

He had scored 10 goals in his seven Champions League games against Juve while at Real, but had struggled this season in Europe after moving to Turin, scoring just once.

There had been no doubts about his league form - he is the second-highest scorer in Serie A with 19 goals - but his return in Europe had been below expectations for a man who has been the top scorer in the Champions League for the past six seasons.

Now 34, he had become used to being used sparingly by Real in order to ensure he was in peak competition for the latter stages of the season - in 2016-17 he scored 10 times in Champions League knockout games alone.

But Juve had not followed that model.

For the past two seasons, Real had given him a break in some domestic games. In that time he was rested for 10 La Liga matches, missing another 10 through injury or suspension. He did not play any of their six Copa del Rey games last season, and only two the previous campaign.

Last season he was left out of a La Liga trip to Las Palmas three days before he scored twice, including a famous bicycle kick, in Real's 3-0 win at Juventus. In 2016-17 he was rested for a game at Sporting Gijon and three days later scored a hat-trick against Bayern Munich to send them into the semi-finals.

But perhaps Juve, who have won every Italian league title since moving stadiums in 2011 and are 18 points clear at the top this time out, have finally realised how best to manage their star forward.

He has only been rested once all season - for Friday's 4-1 win over Udinese, their most recent match.

Before that, he had played every domestic game - 26 Serie A matches and two in the Coppa Italia. Of the 26 league matches - including one substitute appearance - he has played 90 minutes in 23.

But after being rested in preparation for what was undoubtedly the most crucial game of Juve's season, he delivered spectacularly.

If he sits out a few more league games between now and the end of the season, the Italians may be the team to beat in Europe.

Ronaldo has done this before of course - here is a reminder of some of his famous Champions League nights: 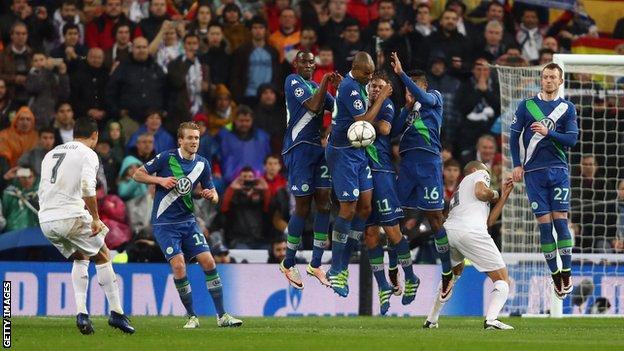 Real came into the second leg of their quarter-final with Wolfsburg 2-0 down but 18 minutes into the Bernabeu game, Ronaldo had scored twice to level the tie and his 77th-minute free-kick sent them into the semi-finals. 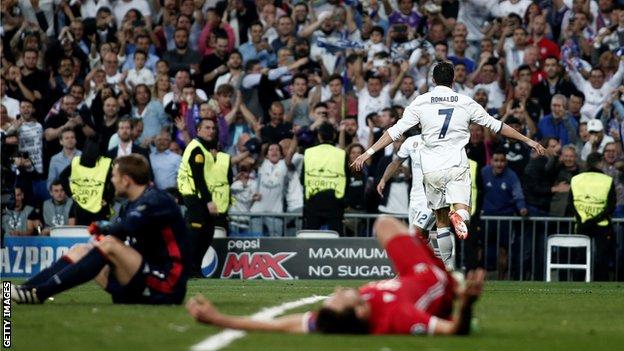 Ronaldo scored a hat-trick, including two goals in extra time, as Real Madrid knocked Bayern Munich out in the quarter-finals. His third, a tap-in from Marcelo's cross, made him the first player to score 100 Champions League goals. 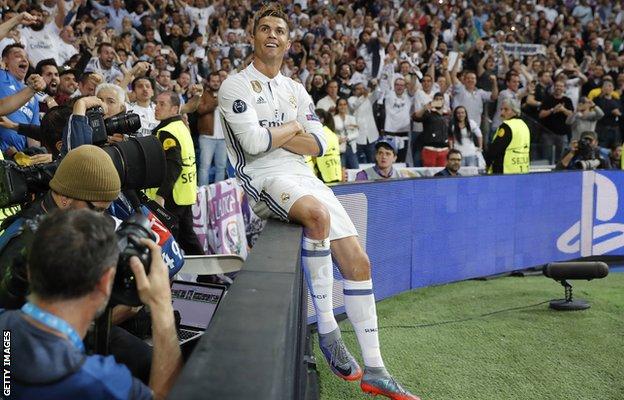 Ronaldo's next Champions League game produced another hat-trick, his seventh in the tournament. He scored with all three of his touches in the penalty area as Real defeated their local rivals in the first leg of the semi-final. 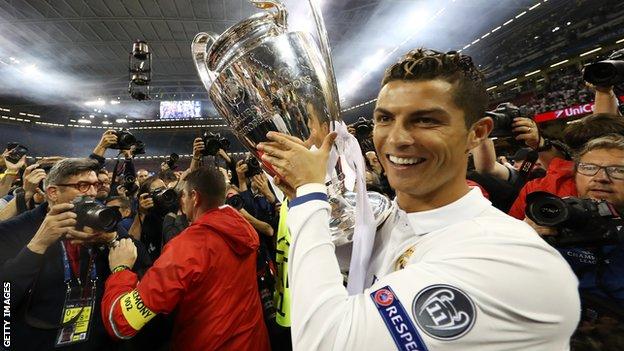 Ronaldo scored twice in the Cardiff final against his future employers, the third Champions League final he had scored in - all victories. He managed 10 goals in the last five games of that season's tournament, including the two hat-tricks mentioned above. 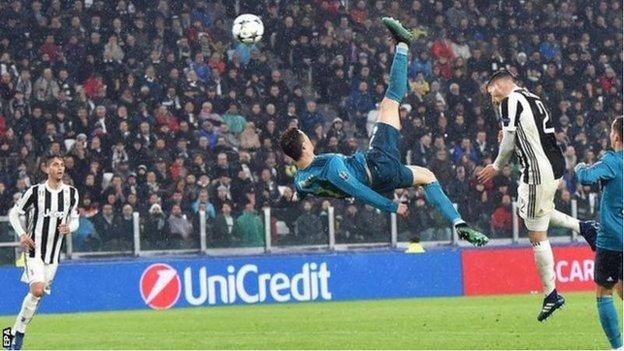 Arguably Ronaldo's greatest goal as he flew high into the Turin air to send a scarcely believable bicycle kick past Gianluigi Buffon in last season's quarter-final. The goal earned him a standing ovation from Juve's fans - a moment that surely had an influence in his decision to join them a few months later. He netted twice in the game, becoming the first man to score in 10 consecutive Champions League matches.