Real Madrid's 1,011-day reign as European champions is over.

Two years, nine months and five days since they beat fellow Spaniards Atletico Madrid in the 2016 final in Milan, they have finally been eliminated from Europe's premier club competition after three titles in a row.

Santiago Solari's team saw their 2-1 first-leg lead overturned in emphatic fashion, as Dutch side Ajax claimed a stunning and deserved 4-1 victory at the Bernabeu.

Despite only being in charge for 113 days, Solari has overseen Real's two heaviest home Champions League defeats, with this coming after the 3-0 defeat by CSKA Moscow in December.

And Tuesday's exit comes six days after they were eliminated from the Copa del Rey by fierce rivals Barcelona, whom they trail by 12 points in La Liga.

BBC Sport looks at the stats behind Real's remarkable run and the fallout from Tuesday's chastening loss...

No Ronaldo, no Champions League 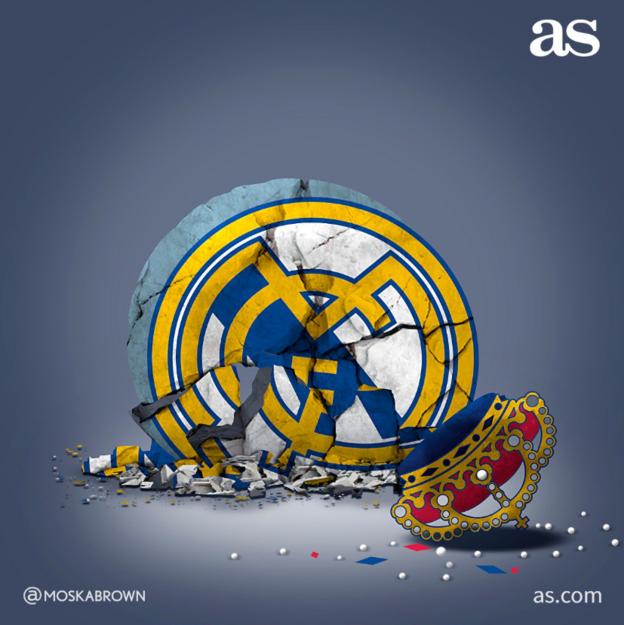 For the first time since May 2015 - a run stretching 46 months - Real Madrid are out of the Champions League.

They have a remarkable record since the start of the 2015-16 season, in which they claimed the first of their three successive titles.

Real had reached at least the semi-finals in every season since they were knocked out in the last 16 by French side Lyon back in 2010, in Cristiano Ronaldo's first season with the club.

So what has gone wrong? Too much to sum up in one paragraph, but obviously losing the goals of Ronaldo has been a major problem.

'The end of an era' - reaction at home and abroad

Spanish newspapers AS and Marca went into overdrive at the full-time whistle, with several articles calling for the exits of manager Solari, president Florentino Perez, and numerous players - including Gareth Bale - who are "many of them in an undeniable end of cycle."

Captain Sergio Ramos - who missed the game through suspension having been booked deliberately in the first leg - watched from a box while being filmed for an upcoming documentary. Now a must-watch...

Spanish football journalist Guillem Balague on BBC Radio 5 Live: "Just wait until the summer! There are big big problems at Real. One of the top players, one of the captains at Real, said that they only need to play well for four games a season to win the Champions League. That attitude in the long term is a massive problem.

"It's the worst defeat at home in their European history. There was resignation from the fans - they just went home without making any noise.

"They cannot compete in the market like they used to; they stopped getting Galacticos in 2014 and the squad is thinner and thinner. Who would you say is a superstar in this team? Everyone has disappointed.

"Gareth Bale did not start, which is frustrating him big time, but they do not see him as one of them. When he has been given the responsibility he hasn't shone but he won't shine if he's only given 15 or 20 minutes."

Former Manchester United and Real Sociedad boss David Moyes on BBC Radio 5 Live: "Real needed this game tonight, but they were well beaten. It should have been by more. A lot of people will be wanting to know what is going to change at Real Madrid. It is the end of an era.

"Cristiano Ronaldo left over the summer and you'll now be looking at a Luka Modric, maybe a Toni Kroos or Sergio Ramos leaving. It would not surprise me if there is a complete change at Real Madrid in the summer.

"I think they are something like 25-30 goals down on what they were last season. That is because of Ronaldo's goals. But I still don't think you expect to go to the Bernabeu and win the way teams are doing at the moment. That title - the Galacticos - is not there at the moment.

"But they have a strong president and club and I'm sure they'll already be thinking about how they rebuild to get back to where they have been."

BBC commentator Alistair Bruce-Ball: "It's a truly seismic result in terms of European football and possibly the end of an era.

"This Real team have won four of the last five Champions League and they have been humiliated on their own pitch."