Manchester City went top of the Premier League after a 1-0 win at Bournemouth, while title rivals Liverpool missed the chance to return to the summit after being held to a goalless draw in the Merseyside derby at Everton.

Spurs and Arsenal drew 1-1 in the north London derby and Manchester United made it 10 wins in 12 Premier League games under caretaker boss Ole Gunnar Solskjaer after a thrilling 3-2 win over Southampton.

Scott Parker's first game in caretaker charge of Fulham ended in a 2-1 home defeat by Chelsea, Wolves beat Cardiff 2-0 and Brendan Rodgers' reign at Leicester started with a 2-1 defeat at Watford. 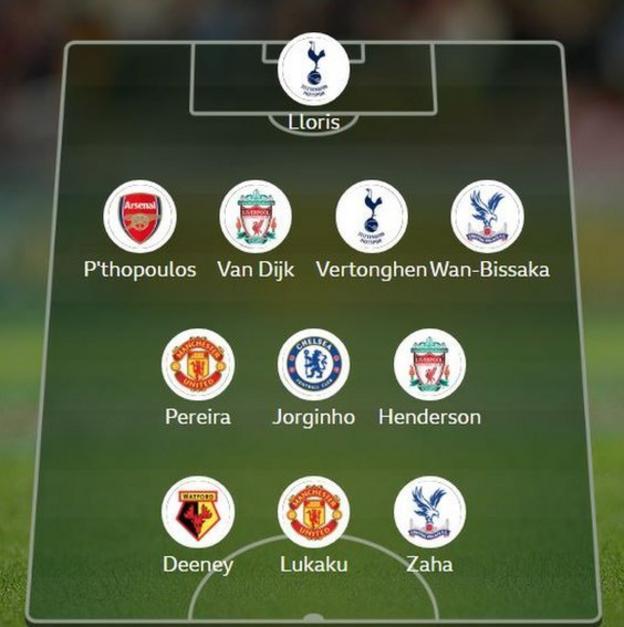 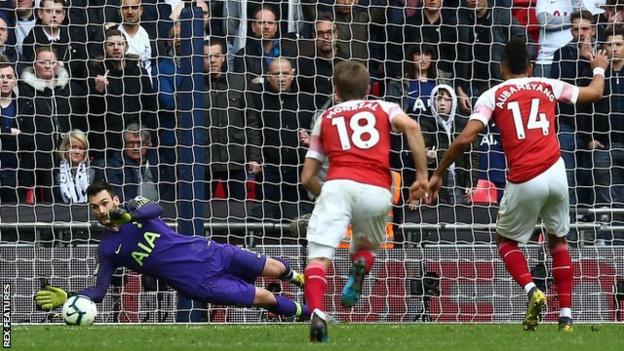 Regular readers of my team of the week will know my views on Hugo Lloris. There is no doubt in my mind he can keep goal but not well enough for a top-four club.

That might sound a little incongruous for a France World Cup winner but standards are not what they used to be. His performance against Chelsea yet again emphasised my point that you can be a very good shot-stopper and not a world-class goalkeeper.

This became abundantly clear against Arsenal. Lloris' ability to stop shots was evident again when he saved Pierre-Emerick Aubameyang's penalty and Tottenham's blushes. To lose for the third consecutive game and against the enemy would have been just too much.

Did you know? Lloris has saved two penalties in the Premier League this season (five faced) - only Cardiff's Neil Etheridge has stopped more (three).

Sokratis Papastathopoulos: Harry Kane is back and Spurs are having to find their rhythm again to accommodate him. Fortunately for Papastathopoulos, the Spurs striker is not yet firing on all cylinders which made life a little easier for the Greece defender, who handled not just the England centre-forward extremely well but the occasion.

How anyone thought the tackle by Lucas Torreira on Danny Rose was anything other than a red card beggars belief - regardless who you support.

Virgil van Dijk: What a colossus this man is. In the white-hot heat of a Merseyside derby, Virgil van Dijk was simply immense. Whatever needed to be done was completed with composure and style.

On a day when Liverpool's strikers looked more like the three stooges than the red arrows, Van Dijk took it upon himself to try and score the goals as well as defend his own penalty area.

The problem for Liverpool is simply this; if they don't win the title this season the chances are Real Madrid or Barcelona will come knocking - probably both. And few turn them down.

Did you know? Van Dijk has won 133 aerial duels in the Premier League this season - the most of any Liverpool player.

Jan Vertonghen: I have always been a great admirer of Jan Vertonghen. Whenever I have interviewed him - and I have on numerous occasions - he has always been thoughtful, polite and generous with his time.

Against Arsenal he was ruthless, impolite and mean-spirited. Just the sort of attitude you want from your centre-back in the middle of a north London derby.

The tackle on Pierre-Emerick Aubameyang immediately after Hugo Lloris' penalty save was magnificent. In fact it was better than the penalty save itself.

Wan-Bissaka now has the England manager watching his every move and I think he might find himself in the full squad very soon.

Did you know? Wan-Bissaka has won more tackles than any other Premier League player in 2018-19 (71). 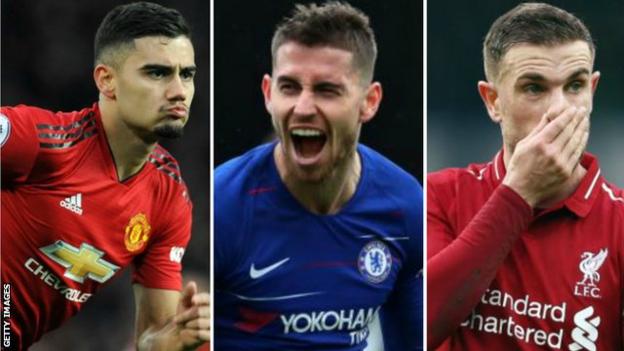 Andreas Pereira: I saw this lad come on against Liverpool and thought he was out of his depth. Unfortunately I'm sometimes prone to these snap judgements but, to be fair, he did cope in very difficult circumstances.

However, start him against a team that is not one of the best in the country or title contenders, and in a game where he has time to actually breathe and, hey presto, you see an artist.

Quite apart from his goal, which was sensational by the way, this lad can play. Then again he's Brazilian. I should have realised.

Did you know? Pereira became the first Brazilian to score and assist in a Premier League game for Manchester United since Anderson in May 2011.

Jorginho: I think Jorginho has struggled since his arrival at Stamford Bridge. Against Fulham, however, he suddenly looked like he was beginning to find some form. His goal was a touch of class in a Chelsea performance that looked competent without being outstanding.

Maurizio Sarri may have managed to get through some difficult weeks but there is still much to do. He is a ditherer, he has an errant goalkeeper and a weak captain. Apart from that they are not doing badly.

Did you know? Jorginho has completed 2,162 passes in the Premier League this season - more than any other player.

Jordan Henderson: If ever a game was made for Jordan Henderson then a Merseyside derby was it. This was not one of Liverpool's most impressive performances but Henderson's contribution was vital.

When Liverpool are firing on all cylinders, which is normally when their front three are on song, no-one cares about Henderson. When they are not, the England international suddenly becomes a critical feature to the team's survival plan. And so it was against Everton. When Liverpool are struggling they need Henderson.

Did you know? Henderson is averaging 74.2 completed passes per 90 minutes in the Premier League this season - the most of any Liverpool player. 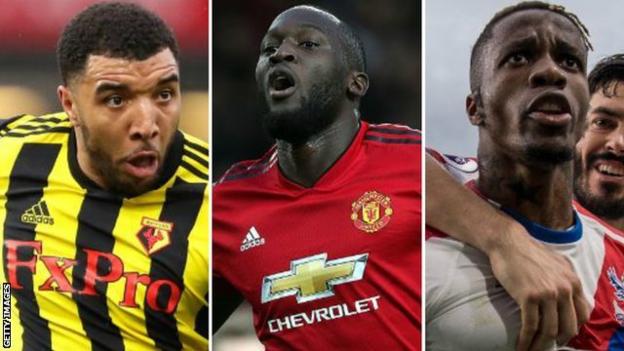 Troy Deeney: He may not have the pace of Roberto Pereyra or the natural ability of Gerard Deulofeu, but what Troy Deeney does have is bucket loads of passion, willingness and heart.

The Watford captain is always in the thick of it and his goals often come through sheer endeavour. That was the theme against Leicester City who shot themselves in the foot with reckless defending in the closing stages of the game.

Brendan Rodgers has a lot of work to do at that club. Read more about what I think of Rodgers' move to King Power Stadium in 'The Crooks of the Matter' below.

Did you know? Only Manchester City's Sergio Aguero (10) has been directly involved in more Premier League goals in 2019 than Deeney (eight - five goals, three assists).

Romelu Lukaku: I said a few weeks ago that Ole Gunnar Solskjaer's emphasis on pace, especially up front, was going to make life a little more difficult for Romelu Lukaku.

However, what Lukaku has done is what all top players do when there are changes in personnel or style to the team. That is adjust. His performances since his return to United's starting line-up have been outstanding.

The Belgium international is looking like a player again. His two goals in each game against Southampton and Crystal Palace makes the point. Lukaku playing like this gives United options and makes them serious contenders for the title again next season.

Did you know? Lukaku has been involved in 11 goals in his past 11 Premier League appearances against Southampton (nine goals, two assists).

Wilfried Zaha: It was like a rendition of The Beatles hit Twist and Shout. Only this time it wasn't John Lennon on vocals but Wilfried Zaha calling the tune.

The Ivory Coast international had Burnley's Ben Mee and Charlie Taylor performing the dance before slotting the ball past Tom Heaton.

There is nothing more humiliating than a skilful winger making defenders dance around the pitch unable to lay a boot on the player.

Did you know? Zaha has had a hand in six goals in his past six Premier League games (five goals, one assist).

A banner held by Celtic supporters stating what they thought of Brendan Rodgers' departure to Leicester City said it all: "You traded immortality for mediocrity. Never a Celt, always a fraud." This was a serious kick in Brendan's teeth. You had to be an automaton not to feel that blow.

So what did Celtic fans expect from Rodgers? Are they seriously telling me that any one of them would have turned down a job that doubled, possibly tripled, their salary? Hasn't Rodgers paid his dues by rehabilitating himself and re-established Celtic as the dominant force north of the border - all in less than three years? What more do they want? And besides, wasn't that always the deal?

The truth is the game of football is built on emotion and its fans are the most emotional of all. Football managers, meanwhile, have to live in the real world.