Liverpool moved a point clear at the top of the Premier League after a goalless draw at Manchester United, on a weekend where Tottenham lost ground by losing 2-1 at Burnley.

While Spurs stay third, Arsenal moved above United into fourth place with a comfortable win over Southampton.

Leicester sacked manager Claude Puel after a 4-1 home defeat by Crystal Palace, while there were three penalties awarded - two of them scored - as Wolves drew 1-1 at Bournemouth.

Watford picked up the biggest win of the weekend, hammering Cardiff 5-1 thanks to Gerard Deulofeu's hat-trick on Friday, and there were also victories for Newcastle and West Ham against the bottom two.

But the most dramatic scenes - of which more later - occurred in Manchester City's Carabao Cup final win on penalties over Chelsea at Wembley. 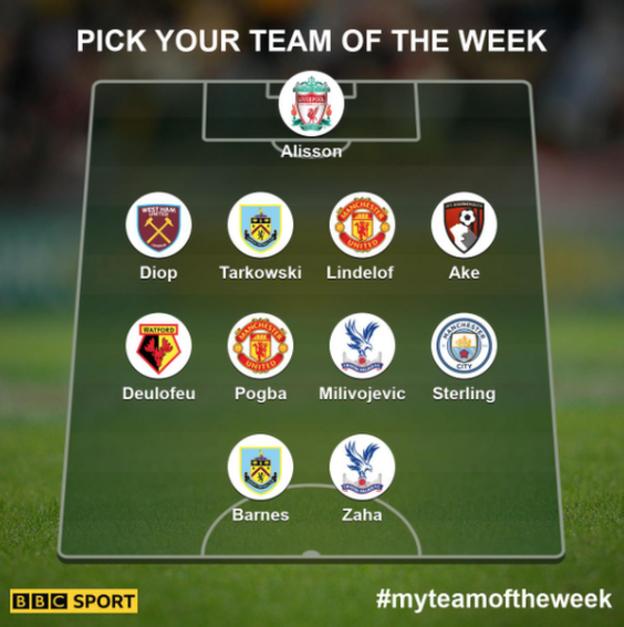 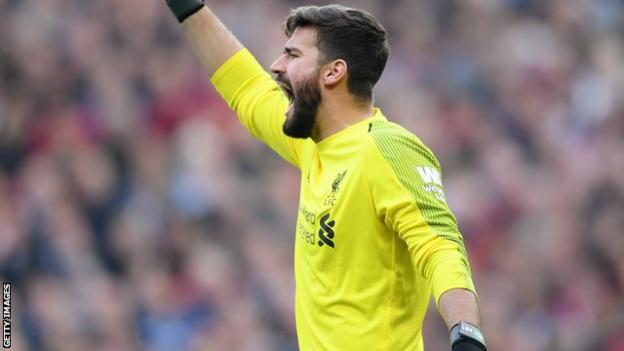 The save by Alisson as Jesse Lingard tried to take the ball around the Brazil international was a game-changer at Old Trafford.

Quite apart from anything else, I thought it was a certain goal. Would I have done exactly as Lingard did? Absolutely.

Alisson was so alert to what the forward was about to do - and took the ball so cleanly - that there was no hint of a possible penalty.

Liverpool went top of the table on Sunday all because of Alisson's moment of sheer brilliance.

Did you know? Alisson has kept his 15 Premier League clean sheets this season, three more than any other goalkeeper. 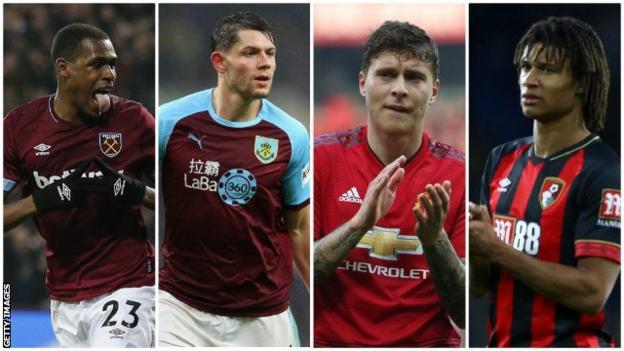 Issa Diop: The Frenchman produced a similar performance at Everton earlier in the season. This time his contribution was rewarded with a brilliantly taken goal against a Fulham side who got what they deserved.

What on earth was Ryan Sessegnon doing marking Diop on corners? Who was the bright spark that arranged that mismatch?

Diop took total advantage of Fulham's poor organisation. If you're going to score your first league goal for the club, you might as well do it in front of your own supporters.

Did you know? In addition to scoring his first Premier League goal, Diop made more clearances than any West Ham player (four) in their win over Fulham.

James Tarkowski: As far as competitors go, they don't come much better than James Tarkowski. The England defender's heroics at the back caused Tottenham a great deal of pain on Saturday.

The reaction from manager Mauricio Pochettino after the game said it all. His confrontation with referee Mike Dean was the clearest indication that Spurs had just blown away any chance of winning the title. His behaviour, while out of character, was unnecessary and ugly, and certainly wasn't going to change the result.

Did you know? Tarkowski made more tackles (four) and clearances (14) than any Burnley player during their win over Spurs.

Victor Lindelof: The fact that four Manchester United players suffered first-half injuries against Liverpool - with three of them having to be substituted - and yet still came away with a clean sheet and a point against Liverpool is bordering on the miraculous.

The United fans were amazing and kept their depleted team going as they spent much of the match under the cosh. I thought Victor Lindelof was a rock - amazing. Without doubt, he is United's most improved player this season.

Did you know? Lindelof registered the best passing accuracy (94%) - and made more clearances - than any other Manchester United player against Liverpool.

Nathan Ake: I remember watching Nathan Ake play for Chelsea Under-21s at Selhurst Park some years ago and he stood out then.

At the time, I never thought he was quite good enough for a top-four club, which is what Chelsea were then, but does he compare with Antonio Rudiger or Andreas Christensen today? I think he probably does, you know.

The Bournemouth centre-back was immense against a threatening Wolves attack and is worth every penny they paid for him.

Did you know? Ake made 14 clearances for Bournemouth, eight more than any other player on either team during their 1-1 draw with Wolves. 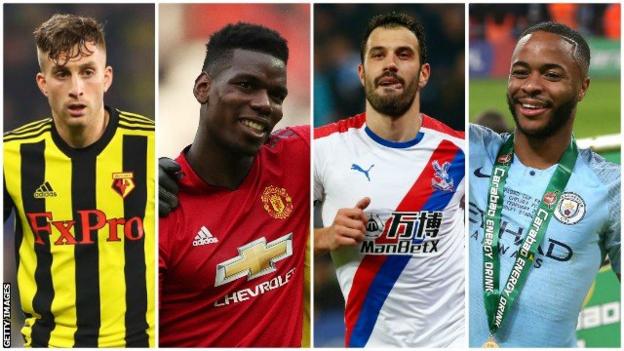 Gerard Deulofeu: You never know what sort of display you're going to get from Gerard Deulofeu - but when he's hot, he's steaming. It was wonderful hat-trick against Cardiff by a very gifted footballer.

I thought Neil Warnock was going to explode when Simon Hooper refused to award the Bluebirds a penalty after the diabolical tackle by Watford's Daryl Janmaat on Josh Murphy. What conclusions he will come to once he sees the three penalties given by Roger East in the Bournemouth-Wolves fixture is anyone's guess.

Paul Pogba: I am starting to become quite a fan of Paul Pogba. Yes, I know it's a bit embarrassing for me, especially after the chasing I gave him all last season. But with World Cup success on his CV, and in particular since the departure of Jose Mourinho, Pogba has struck form that must rank him as one of the top five midfield players in the world.

In a United side ravaged by first-half injuries, his performance was immense. This was Pogba playing for Manchester United in a way I hadn't seen him before. He's become a grown-up.

Did you know? Only Ashley Young (30) attempted more passes in Liverpool's half for Manchester United than Pogba (24).

Luka Milivojevic: The moment referee Anthony Taylor pointed to the spot at the King Power Stadium, there was no doubt in my mind that Luka Milivojevic would step up and make Leicester, and in particular Jonny Evans, pay.

What neither player knew was is that this was a result that would cost Claude Puel his job.

To be brutally honest, a player of Evans' experience should have known better than to have been so clumsy in the box.

Meanwhile, Milivojevic continues to provide cool leadership on the field, which perfectly reflects that provided by Roy Hodgson in the dugout. An excellent win for the Eagles.

Did you know? Milivojevic has scored more Premier League goals (20) than any Palace player in the period since his debut in February 2017.

Raheem Sterling: After knocking Tottenham out of the Carabao Cup on penalties, Chelsea's appearance in the final ended up being an ordeal.

Raheem Sterling put the Blues to the sword by sticking the winning penalty past Kepa Arrizabalaga. The Spain international goalkeeper was determined to be the hero at Wembley and refused to leave the field when substituted by his manager.

Unfortunately for him, Sterling had other ideas. Read my thoughts on this outrageous incident in The Crooks of the Matter below.

Did you know? Sterling scored just his second Manchester City penalty, and first since converting against Watford in September 2017. 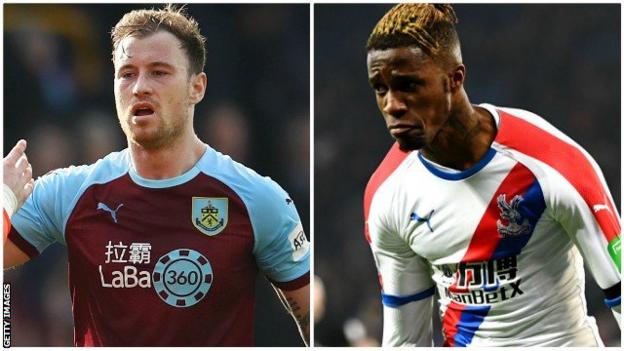 Ashley Barnes: If Burnley continue to play like they did against Tottenham on Saturday, then they have nothing to worry about.

Chris Wood and Ashley Barnes have been outstanding in recent weeks but sadly only one could make my team of the week.

This was a performance steeped in good old fashioned Lancashire spit and polish with little time for culture. The fact of the matter was that Tottenham couldn't cope with Burnley's grit and bite. And if you can't handle the grit and the bite away from home, you have no business talking about titles.

Did you know? Barnes has now scored in four consecutive Premier League games, his joint-best run in the division.

Wilfried Zaha: I have seen Wilfried Zaha play better and not make my team of the week but it is very difficult to leave a striker out of my selection when he scores two goals and his team win away from home.

I am also of the opinion that an in-form Kasper Schmeichel might have saved both of Zaha's goals; I have seen the Leicester keeper play better too. Both are outstanding players but there's no question that Zaha won the day.

Let's hope that the Ivorian continues to punch the air in celebration of his goals and stops clapping the referee in sarcastic arrogance.

Did you know? Zaha scored with his two shots against Leicester in Palace's 4-1 win.

I don't think I've witnessed anything like it in all my time in football. To see Kepa Arrizabalaga stay on the field, and refuse to accept the manager's decision to substitute him, is the most disrespectful response I have ever come cross in the professional game.

Sunday's Carabao Cup final wasn't a friendly or a pre-season match but a showpiece final at Wembley Stadium. Precisely what this incident has done to Maurizio Sarri's managerial reputation, not to mention his already fragile position at Stamford Bridge, is anyone's guess. The humiliation was palpable.

What I found even more extraordinary was that Kepa didn't seen to understand the significance of what he was doing to himself, his team-mates and most of all, his manager.

This was an act of pure and utter self-indulgence. Should Sarri survive this embarrassment, Kepa should not play another game for Chelsea without a full and sincere apology to his manager, the club, his team-mates and supporters. And he should think himself lucky he still has a contract at all.