Sergio Aguero hit a second hat-trick in three matches as Manchester City thumped Chelsea 6-0 to move above Liverpool and top the Premier League.

Tottenham kept themselves in the title hunt by seeing off Leicester 3-1 and Liverpool did their part by beating Bournemouth 3-0 while their Merseyside rivals Everton lost for the third time in a row, going down 1-0 at Watford.

The race for Champions League qualification saw Arsenal win 2-1 at Huddersfield, while Manchester United made it 25 points from a possible 27 under Ole Gunnar Solskjaer by easing past Fulham 3-0.

Cardiff's last-gasp 2-1 win at Southampton looks huge in the relegation battle and Burnley's 3-1 win at Brighton did them no harm in establishing breathing space from the bottom three.

Crystal Palace, meanwhile, will wonder how they did not pick up three points having had 25 shots in a 1-1 draw with West Ham.

It was a thrilling weekend - but which players earned a spot in my team? 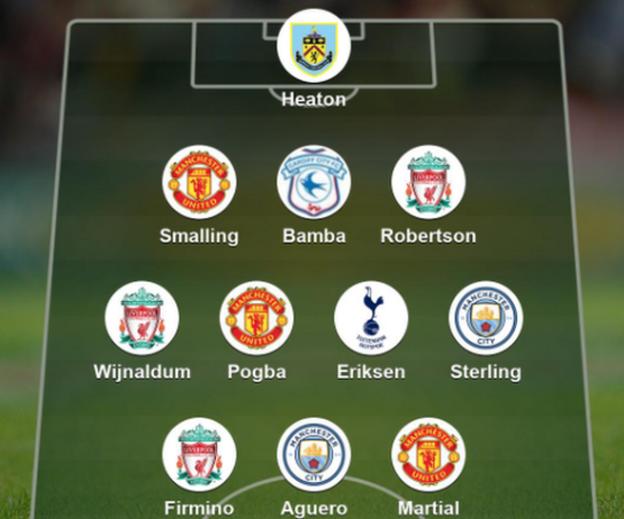 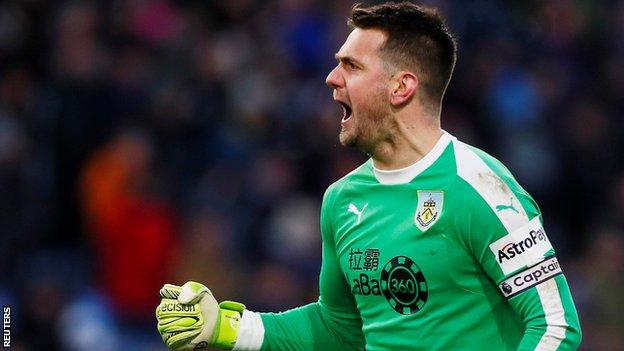 Heaton's save from Solly March at Brighton wasn't bad but the one from Pascal Gross was top class. However, it was the second goalbound strike from March that I thought was world class and destroyed any chance of Brighton getting back into this match.

Heaton is back between the sticks and looking magnificent. If he keeps playing like this, Joe Hart had better start looking for another club.

Did you know? Tom Heaton has saved 80% of the shots he's faced in the Premier League this season - a higher percentage than team-mate Joe Hart (65%). 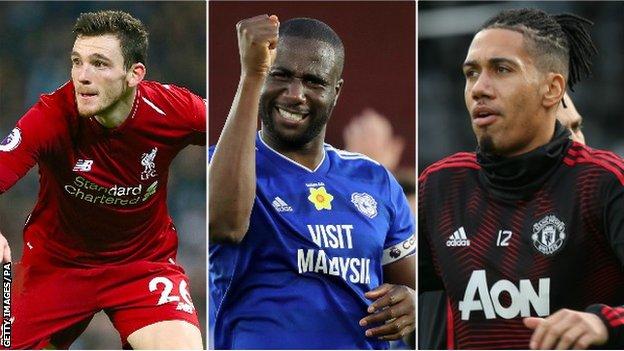 Andy Robertson: I just love watching this kid play. Apart from anything else, he has nerves of steel. The ball he played for Georginio Wijnaldum to score was just wonderful and the side-foot volley when Sadio Mane should have scored was just sensational.

There is nothing more frustrating for a striker than a full-back who offers nothing going forward and I've played with enough to know. Robertson is a striker's dream and the best I've seen since Ashley Cole.

Did you know? Since his Liverpool debut in August 2017, Robertson has assisted more Premier League goals (11) than any other defender.

Sol Bamba: They would have been dancing in the streets of Abidjan when Sol Bamba scored Cardiff's opening goal in their 2-1 win at Southampton.

The Ivory Coast international's goals are giving Cardiff hope and his form bodes well for his national team. Not since Kolo Toure took the Premier League by storm as a young Ivorian defender with Arsenal has a player looked so potent in attack and so authoritative in defence. A leader if ever I saw one.

Did you know? Sol Bamba has made 26 blocks in the Premier League this season; the most of any player for Cardiff City.

I've been watching the Serb bully and manipulate defenders for years but Smalling was having none of it. Not bad for a player who's struggling to maintain a regular place in the Manchester United team.

Did you know? Chris Smalling has won more aerial duels than any other Manchester United defender in the Premier League this term (59). 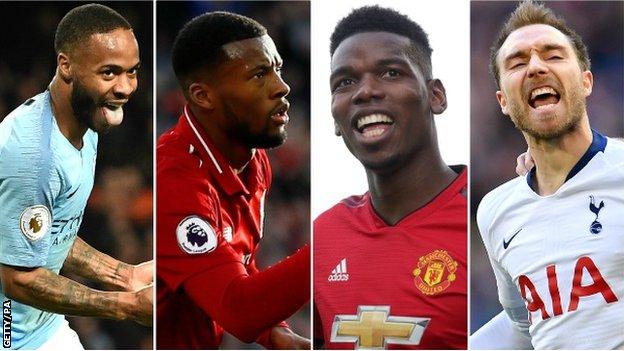 Georginio Wijnaldum: Sickness and diarrhoea can sweep through a club like wildfire. So imagine when one of your star players comes to training suffering from the symptoms. Panic ensues!

Not so with Liverpool and Georginio Wijnaldum. The Netherlands international insisted he could play and produced an outstanding performance against a Bournemouth side outclassed from start to finish.

Did you know? Since the start of last season, Liverpool have won 66% of the Premier League games that Wijnaldum has appeared in, compared to 50% when he hasn't.

Paul Pogba: The win at Fulham was a walk in the park for Manchester United and Paul Pogba.

The France midfielder scored two goals and spent most of the match strolling around Craven Cottage like he was the Lord of the Manor.

He then came off the field after 74 minutes, presumably to save his legs before United's Champions League fixture against Paris St-Germain, to a standing ovation. The harsh truth for Fulham is that United looked as though they were in a different league. If Fulham continue to play like this, they very soon will be.

Did you know? Some 36% of Paul Pogba's Premier League goals for Manchester United have come in his nine games under Ole Gunnar Solskjaer (8/22).

Christian Eriksen: This was one of the worst performances I've seen from Spurs - but they could finish and Leicester couldn't.

If Harvey Barnes had a little composure in front of goal, he'd be dangerous. Conversely Christian Eriksen looked cultured and shone like a diamond in the rough.

The fact that Claude Puel keeps Jamie Vardy on the Leicester bench when it's patently obvious that he's the best striker at the club is ludicrous.

Whatever problems exist between the manager and the player need to be resolved. This nonsense is killing the team.

Did you know? Christian Eriksen has scored 20 Premier League goals from outside the box - more than any other player since his debut in September 2013.

Raheem Sterling: I originally selected Bernardo Silva in my team for producing another outstanding performance against a shell-shocked Chelsea. But when Sterling got his second goal, having made Sergio Aguero's first, I had to go for the England international.

Sterling is scoring goals he would have missed two seasons ago which is an indication of his enormous development under Pep Guardiola. As for Chelsea - for a top six club to be beaten 6-0 in a Premier League fixture is quite outrageous. What on earth is going on at Stamford Bridge?

Did you know? Raheem Sterling (21) is one of only four players to have been directly involved - scoring or assisting - in more than 20 goals in the Premier League this season, alongside Mohamed Salah (24), Sergio Aguero (23) and Eden Hazard (22). 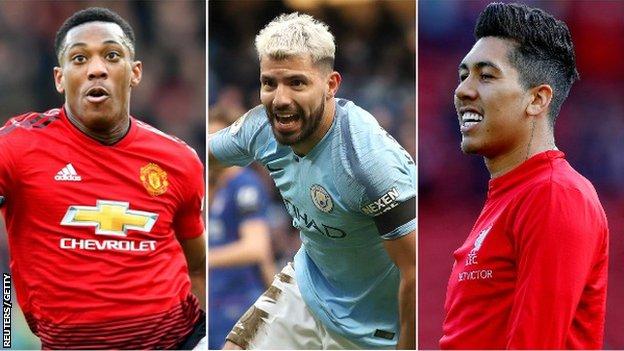 I've gone for Firmino because, without him, the team doesn't function quite the same. He makes Liverpool tick in the same way Luis Suarez and Philippe Coutinho used to. I also selected him just to prove (as rumour has it) that you don't have to score goals to make my team.

Did you know? Since the start of the 2015-16 season, Roberto Firmino has been directly involved in more Premier League goals than any other Liverpool player (70 in total - 45 goals, 25 assists).

Sergio Aguero: I would have loved to have been in a position to select Burnley's Chris Wood for his performance against Brighton as it deserved recognition. However when you've got Sergio Aguero in this form, you're asking me to do the impossible.

Did you know? In the drubbing of Chelsea, Aguero scored his 11th Premier League hat-trick, equalling the record set by Alan Shearer.

Anthony Martial: His goal at Fulham was simply superb. He went past Fulham's Denis Odoi and Maxime le Marchand as if they weren't there.

The France international then calmly stroked the ball past Sergio Rico into the back of the net to send United fourth in the table. United's total resurgence must be killing Jose Mourinho.

Did you know? Martial has now been directly involved in 50 Premier League goals (33 goals, 17 assists), more than any other Manchester United player since his debut in September 2015.

You've seen my picks but who would you go for this week?

I was absolutely delighted to hear that West Ham have decided to honour their former captain Billy Bonds by renaming the East Stand after their record appearance holder. Bonds was one of the first top-class defenders I ever encountered as a bleary-eyed 18-year-old striker trying to find his way in the game.

Playing at Upton Park was a formidable experience in those days, especially for a black player. But for all the barbed remarks coming from the terraces, Bonds would never engage in foul-mouthed abuse, unlike some players of that generation. I was immensely impressed and I never lost my respect for the man.

The same was true of Trevor Brooking, who I am convinced is behind this wonderful accolade. He was always too polite for words and a gentleman on and off the field. So what was it about these two East End boys that made them so accommodating of strangers? Who can tell? Perhaps it was simply down to their sense of common decency.

Joint chairmen David Gold and David Sullivan have got some things terribly wrong since their arrival at the club. Bond epitomised the very heart and soul of the club. It sounds as if they've finally got something right.